Risk and sacrifice: how Itakura Katsunobu revolutionised the art of ski-mountaineering in Japan

Alpinism, says an expert, is a game of ghosts. If you learn your trade in Wales, that tweed-clad figure padding up the Cwm Idwal slabs, some decades ahead of you, is George Mallory. Climb an alpine north face, and you follow in the crampon-scratches of Willo Welzenbach. For ski-mountaineers in Japan, it is Itakura Katsunobu (1897-1923) who led the way. 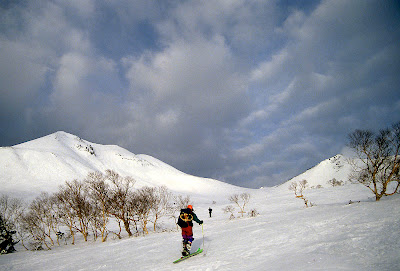 Itakura did not introduce skis to Japan, nor was he the first to use them to climb mountains. That distinction probably belongs to Theodor von Lerch (1889-1945), an Austrian military attaché who came to Japan before the First World War. But it fell to Itakura to meld skiing, rock- and ice-climbing techniques into a powerful new style of "dynamic mountaineering" – which he demonstrated to the world in 1919 with a sensational solo winter ascent of Yarigatake.

In April 1919, after the sensational Yari ascent, Itakura started his freshman year at Hokkaido University. The following year he joined the university's Ski Club and started to remould it in his own image, as a hard-driving elite corps for winter mountaineering ascents. That story has now been told in English by Dave Fedman, a San Francisco-based historian who is researching the history of mountaineering in Hokkaido. In his paper Mounting Modernization: Itakura Katsunobu, the Hokkaido University Alpine Club and Mountaineering in Pre-War Hokkaido, Fedman relates how Itakura passed on his climbing, skiing, navigation and fitness training skills to the club and started its members on a campaign of winter mountaineering all over Japan's northernmost island. Over the next two decades, the club notched up more than 100 winter first ascents in Hokkaido.

Alas, by that time, Itakura was no longer with them. In his last summer seasons, he frequently climbed with Maki Yuko, who had made the epoch-making first ascent of the Eiger's Mittelegi Ridge in September 1921, a climb that greatly enhanced the repute of Japanese alpinists both at home and abroad.

Less than two years later, Maki organised a winter trip to Tateyama, on which Itakura became separated from his colleagues in a blizzard and died of exposure. As he wrote in his posthumously published memoirs, Yama to yuki no nikki (A diary of mountains and snow), "Risk and sacrifice are the way of life at altitude…"

Photos: (above) Workmen Alpinists ski-touring on Norikura, (below) AACH expedition to the mountains of Hokkaido (from David Fedman's paper)
Posted by Project Hyakumeizan at 6:02 PM

cheers for the fascinating report of Katsunobu. Hokkaido mountains are no joke in the winter, and neither is a solo winter ascent of Yari.

Sorry to hear that he met his fate on Tateyama. Do you happen to know if there is any sort of monument to him at Tateyama?