Super-Soya vs Bambi: the search for textual certainty in a Hyakumeizan translation runs into an obstacle

10 November: As the diesel train bores into a frigid Hokkaido evening, I ruminate on the challenges of translating Nihon Hyakumeizan. According to its author, Fukada Kyuya, Japan's most famous mountain book was written with a pair of walking boots. That is, before he could select a peak for his list of One Hundred Eminent Mountains, Fukada had to climb it himself. 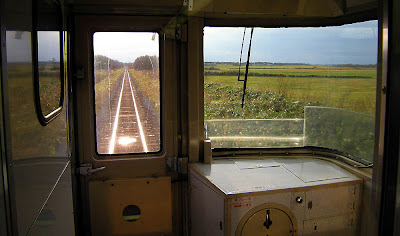 Ideally, one would apply the same rigorous approach to translating Hyakumeizan. Before signing off on each chapter, one would climb the relevant mountain in search of ground truth. And, indeed, there are nuances in the original text that cry out for on-the-spot elucidation. What, for example, is that odd sculpture – or is it a weapon – that adorns the summit of Takachiho (Eminent Mountain No. 98)? And does Candle Crag really "spring like a tusk" from the brow of Rishiri-dake, the northernmost of Fukada's mountains?

It is questions like these that have brought me back to Japan this year. I'm heading first for Rishiri, scene of a failed summit attempt last year. Rising like a miniature Fuji from the wintery seas off northern Hokkaido, the volcanic island lies many thousand kilometres removed from Project Hyakumeizan's usual haunts. 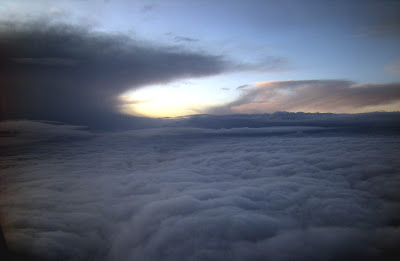 Getting this far had taken an all-day flight on Brobdingnagian Airways, then another full day on assorted multi-amenity express trains, or so they describe themselves. Now, late at night, we are within an hour of Wakkanai, Japan's northernmost railway station and the jumping-off port for Rishiri … 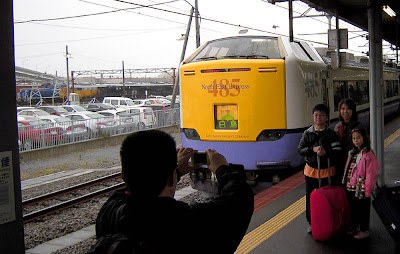 Just at this moment, the train brakes hard. We feel the slightest of vibrations, as if the wheels had run over something. The train slides to a halt. A long pause. The light from the window shows that we've stopped in a cutting of panda grass, the embankments topped by a grove of silver birches.

A rumble from the overhead speakers as the conductor picks up the microphone: the train has hit a deer, he announces, and please excuse the delay while we, ah, deal with it. Well, nobody said that translating with your boots on was going to be straightforward …. The Super Soya is eleven minutes late into Wakkanai this evening.

To be continued
Posted by Project Hyakumeizan at 11:11 PM

鹿身事故? I was similarly held up on the Azusa last night, but for 40 minutes. Perhaps the deer are bigger in Yamanashi.

Whether they are or not, Hanameizan, the tragedy of these accidents is that venison is not widely eaten in Japan - which is why the archipelago is becoming overrun with deer, to the great ruination of its alpine meadows and forests. Perhaps the fast food chains can be persuaded to take an interest? After all one of their number was caught serving up kangaroo-burgers a decade or so ago .....

In a country where lamb is avoided for its strong flavour, I think venison has little chance. And the ruination of a recent local spaghetti bolognese was attributable to venison when I asked the sheepish owner.

This subject is particularly timely. This morning I came across 2 deer hunters about to club a young deer which was fighting desperately to free its leg from a snare trap. 3000-5000 deer are killed annually in the Yatsugatake area, and yet still the deer are proliferating. But these men said they were doing it to make a living. No construction work in winter means they rely on the 4000-5000 yen/tail from the city office.

Later in the afternoon I had a "discussion" with deer hunters firing their rifles from footpaths where I often go running with the dog.

Keep your head well down until the hunting season is over, Hanameizan!