Travelogue continued: climbing Rishiri-dake for a change of perspective

12 November: Mountains, like people, demand to be taken seriously. By walking out of the door of the Maruzen Yado at 2am, I pay Rishiri-dake a handsome compliment. One would start no earlier for a typical Swiss 4000-er. This is a much lower summit, but the height to be climbed is a respectable 1,700 metres. I’ll only get up there with the mountain’s full cooperation. 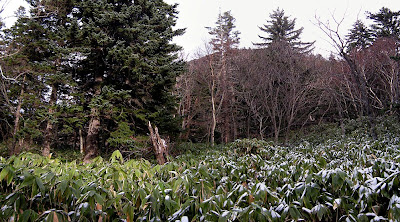 A centimetre of wet new snow has come down overnight, helping to muffle my footfalls through the deserted town. Half an hour’s walk brings me to the end of the road and I turn up my head-torch to full power as the gloomy fir and spruce woods meet overhead. There are no stars; a few snowflakes scatter down from the overcast.

The ground hasn’t started to steepen, but already the mountain is probing my defences. As I brush past fronds of panda grass, they loose their burdens of snow. Last year, the snow was so cold that it simply blew away. This year, it melts onto my jacket and salopettes. The former holds its own but the trousers – picked up in a shop clearance sale in Tokyo more than a decade ago – are soon oozing with meltwater. One blast from Boreas-kun higher up the mountain, and I’ll be frozen into a cheapskate popsicle.

I hold the speed down. Sweat-soaked clothes will also play into Boreas-kun’s hands, should he try the popsicle treatment. But the north wind keeps to its lair as I pass the first ‘look-out point’ just above the fir woods. It’s still dark; my head-torch carves twin cones of light into the wavering mist. 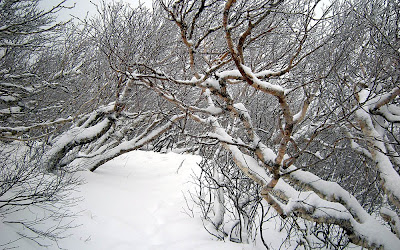 The plan is to walk slowly so that I don’t reach The Thicket, a tangled labyrinth of alder and mountain birch, until daybreak. But this year’s modest snowcover leaves plenty of room between the path and the tree canopy and I pass almost effortlessly through the brush zone. Quite a contrast to last November, when I climbed this section on hands and knees, snake-crawling through the narrow gap between snow and tree-branches. 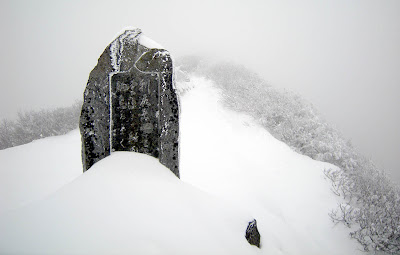 The monument on Chokan-yama looms up in the grey light of dawn. It’s time for a break, but Boreas-kun has woken up. Stopping out in the open is out of the question. On cue, the refuge hut appears out of the clouds. A sharp rap from my fist breaks the icy seal on the sliding door and I tumble inside for a swig from my water bottle – the contents are half-frozen already – and some Swiss muesli bars, my substitute for more professional fare. 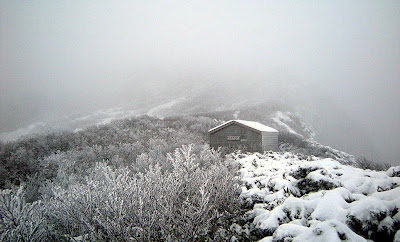 Ten minutes later, refuelled and rehydrated, I’m on my way again. A tussle with a patch of snow-laden creeping pine opens the way to the upper ridge. Here, for the first time, the drifts are deep enough to cover all traces of the summer path, forcing me to prospect for the onward trail. My boots skid off icy boulders lurking under the new snow, but I don’t need Toshiya’s snow-shoes. That’s good, because the straps holding them to my pack are frozen so hard that I won’t be able to loosen them until we get back to sea-level. 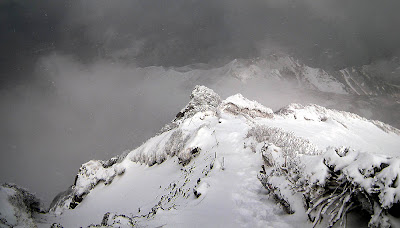 Crampons go on for the last hundred metres. You could get away without them, but it never hurts to treat a mountain with a little extra respect. The steel teeth bite well into the red earth of the final slope, diluting the loom of those misty gulfs on either side of the ridge. The clouds lift a moment, revealing the winding length of the ridge below. It’s as if the mountain wants me to appreciate its stature and scale. 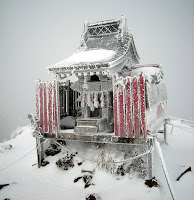 Underneath a thin veneer of rime-ice, the summit shrine is surprisingly well-appointed. Its kami-sama has been in residence for at least a century, as Nihon Hyakumeizan relates:

The first reference to Rishiri that I can find is from Makino Tomitarō writing in the second issue of Sangaku, the Japan Alpine Club's journal in its first year of publication. This botanist and his party climbed the mountain from Oshidomari in August 1903, following a faint trace of a path. Spending two days on the mountain, they found at the summit a small wooden shrine, showing that local people had already been there.

The clouds thin, unveiling a lava pillar nearby. Yes, Rōsoku-iwa really does spring like a tusk from the ridge. “Glimpsed amid the tumbling mists, it was eerily fascinating,” Fukada Kyuya records. I don’t even have time to reach for my camera before the gas comes in again. 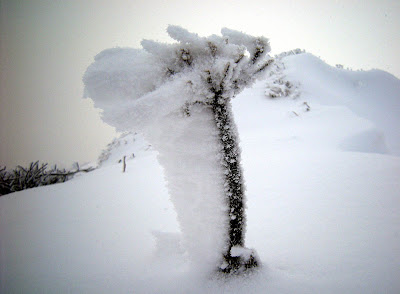 I wait for a few minutes, hoping for wider perspectives. On a clear winter day, one should be able to see as far as the mainland. Nearer at hand, the twin island of Rebun would float atop skeins of sea-fog. But the clouds are obdurate. The view is now limited to a frozen spring of cow-parsley, emblem of the flower fields that bloom all round this summit in the forgotten summer. Behind his frozen-shut doors, the kami-sama appears to be in an uncommunicative mood. 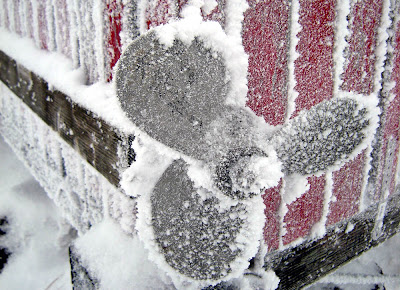 Then I spot the boat propellers. At least three are nailed to the shrine, giving it the appearance of a miniature Howl’s Moving Castle. I begin to see where this kami-sama is coming from. It’s the fish, stupid. How was that again? Well, if the catch has dropped by two-thirds in the past 30 years, if some mysterious disease is eating at your famous kombu seaweed, and if the island’s population has dropped from 20,000 to 5,500 in the last half-century, wouldn’t that give any tutelary kami-sama a headache?

It’s always important to see the other person’s point of view, especially if the person is a god. I concede that my agitation over the lack of visibility is misplaced, frivolous even. Anyway, no view was granted to the Hyakumeizan author, so why should his translator get one? Although the lower world was calm and bright, cloud clung obstinately to the summit, wrote Fukada Kyuya. With the cloud constantly forming as the sea winds blew over the summit, it almost looked as if we would have to give up our attempt ... 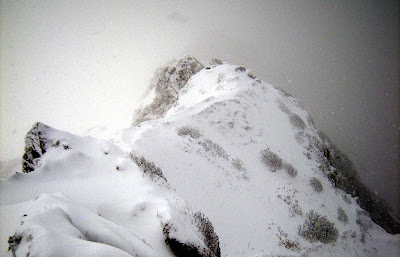 I take a last gulp of frozen slush from my waterbottle. I think of leaving a Swiss muesli bar for the kami-sama but decide not to. He probably wouldn’t like it; sake is probably more to his taste. The main thing is that we understand each other a bit better now. Now it really is time to start down, before Boreas-kun turns me into a permanent fixture up here. 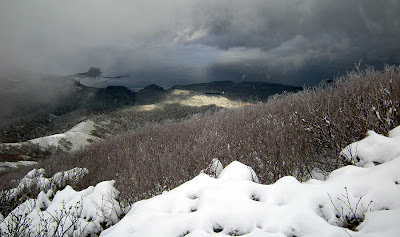 Posted by Project Hyakumeizan at 4:30 PM