“Mountains that women can climb” (3)

The story of Japan's mountaineering women concluded: how the ladies' climbing clubs made it to the top

Standing outside the Imperial Palace on a day of torrential rain in mid-1946, the Emperor proclaimed a new constitution. The bland opening of Article 14 – “All of the people are equal under the law …” – barely hinted at the legislative dynamite smouldering within. At a stroke, half of the Emperor’s subjects were newly enfranchised; for the first time, Japanese women could vote. 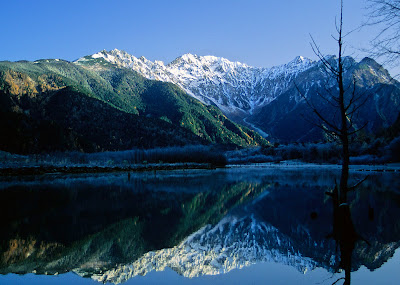 In the mountains, full enfranchisement took a little longer. The Japan Alpine Club – the country’s oldest – formed a women’s section in 1949. That wasn’t enough for some actual or prospective members, who started forming their own clubs. The most prominent was the Edelweiss Club, founded in 1955 by Sakakura Tokiko (see previous article) – an earlier Club Edelweiss, founded by Kobayashi Shizuko two decades earlier, had been dissolved during the war.

The new clubs helped women break into expedition climbing. In 1955, a group of working women led by Hosokawa Satoko went to the Punjab Himalaya and climbed Deo Tibba (6,001m). Others struck out on their own. In 1957, Kawamori Sachiko took an eight-month sabbatical in Europe and made ascents of Mont Blanc and the Matterhorn, the first by a Japanese woman. 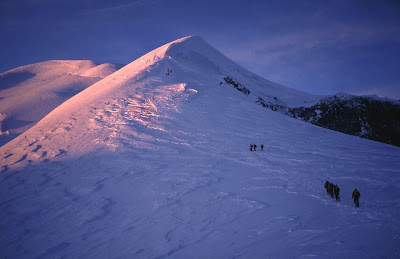 Women also took part in mixed expeditions. A Waseda University expedition to Kilimanjaro in 1958 included two girls. In 1970, Watanabe Setsuko reached Everest's South Col as a member of an expedition to the southwest face. Increasingly, though, women were organising their own overseas trips. Watanabe Setsuko helped to start that trend in 1968, when she and Ashiya Yoko reached the top of Istor-o-Nal (7,200m) in the Hindu Kush. 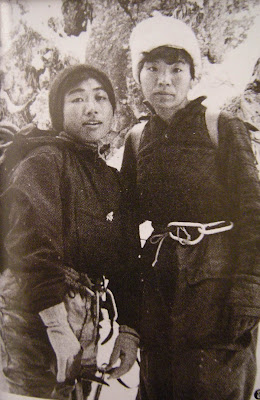 In the same year, a Ladies' Climbing Club was founded, specifically to pursue ambitions in the Himalaya. As none of its members had been there, they needed help in finding an objective. And thus it was that a slightly built but intense young woman paid a visit to an ageing author at his modest house in Setagaya.

In their separate ways, both Fukada Kyūya and Tabei Junko had recently made their names – Fukada with his Nihon Hyakumeizan book and Tabei (right in picture above) with a winter climb on the fearsome cliffs of Tanigawa’s Ichinokura-sawa, a first for an all-woman team.

For his part, Fukada had established himself as a Himalaya guru – he’d published two books on the subject and he’d led an expedition to the Jugal Himal in 1958. It was this expertise that Tabei hoped to tap. “Hmm,” mused the writer as he pored over maps and photos with his guest, “Are there any mountains that women can climb by themselves?”

Apparently there were. In 1970, Tabei Junko and Hirakawa Hiroko made the second ascent of Annapurna III, reaching the 7,555-metre summit by a new route. Five years later, Tabei headed for Everest on an all-woman expedition sponsored by Nihon Television and the Yomiuri newspaper. 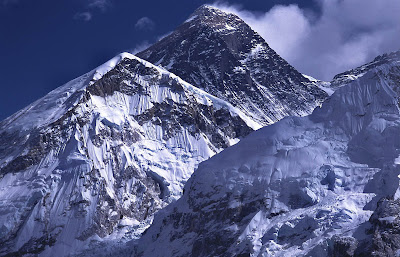 Snow conditions were dangerous: at Camp II (6,300m), the climbers were avalanched in their tents. A Sherpa dragged Tabei out of the snow by her feet; she had to be revived with oxygen. The team decided to continue with the expedition: “After all, nobody had been killed.” Twelve days later, on May 16, 1975, Tabei Junko became the first woman of any nationality to stand on Everest’s summit.

It would be tempting to leave the story of Japanese lady alpinists just there, on the summit of Everest with Tabei Junko. Tempting, yet specious. Such an account would not give the whole picture. It wouldn't explain, for example, why, all the way up the final slopes of Everest, Tabei was holding an imaginary conversation with a former climbing companion called Sasō Rumie: “Sasō-san, every step hurts but watch me, won’t you – ah, now I can see the Tibetan side.”

“Sasō-san” was the best partner that Tabei had ever climbed with. She’d phoned Tabei out of the blue while she was still working in her mid-twenties at the Japan Association for Physics. “I’d like to climb with you,” said Sasō in her inimitably direct way. They started out on the crumbling lava cliffs of Yatsu-ga-dake before graduating to Tanigawa-dake in winter. That was where the black-and-white photo above was taken, showing Sasō standing to Tabei's left.

It was Sasō and Tabei who made the first all-woman winter ascent of Ichinokura-sawa’s Central Ridge. That was in December 1966. The following autumn, Sasō was again climbing in Ichinokura-sawa when her partner slipped. Sasō reached out to grab her, lost her own balance, and fell to her death. The other woman was saved when her pack caught on a projection. 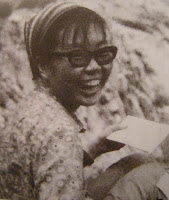 Eerily similar was the trajectory of Wakayama Miko’s life. One of the most stylish climbers of her generation – she also looked good in a kimono, said her friends – she teamed up with Imai Michiko to climb the north face of the Matterhorn. This feat, achieved in the summer of 1967, was another first for women anywhere. Six years later she returned to the mountain with her husband, on their honeymoon. Something went wrong and they both fell. She was 33.

Sekida Michiko too honed her skills on the hard routes of Tanigawa and the Northern Alps. Starting out as an Edelweiss member, she founded her own club in 1969, to focus on even harder routes. Calling themselves the ‘Ryōsetsu’ group, which might translate as ‘snow-defying’, they were as good as their name. In 1972, they went to the precipitous south side of Denali; three expedition members failed to return. Sekida herself survived, only to perish on the snowy ridge of Nishi-Hodaka four years later.

For all these tragedies, it was a golden age of sorts. From the late 60s to the mid-70s, an elite corps of Japanese lady alpinists had the world - sometimes literally - at its feet. As when they climbed the first 8000er to be scaled by an all-women’s expedition – that was Manaslu in 1974 (summit photo below) – as well as two of the great alpine north faces. They were enfranchised. A century after women had won the freedom of Mt Fuji, mountaineering Valhalla had gone equal-opportunity. 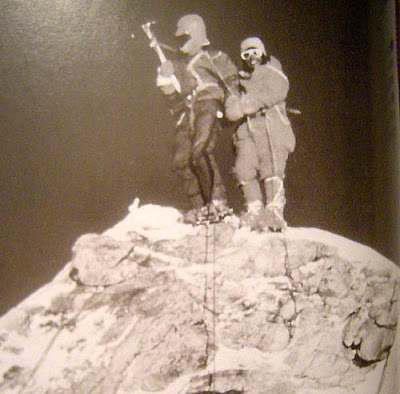 Hiroko Seiwa and Akio Funahashi, History of Japanese Mountaineering and Women in the Light of their Relations to Religion, Faculty of Education, Kochi University, 1982

The anecdote about Fukada helping Tabei Junko choose a Himalayan mountain to climb comes from an article on Everest climbers, Everest Shomei Futatsu, by Fujishima Koji in the Asahi Shinbun, November 15, 2005 (thanks to the Sensei for this)

Previous posts in this series

Part 1: The story of Tatsu, the first woman to climb Mt Fuji

Part 2: How the Otenba of Taishō pushed out the boundaries

I was impressed... I fell deep in thought, thinking about those remarkable women climbers.

Great post! Each of the women who perished is an historical novel unto itself; collectively, an amazing anthology exists that I wish you would pursue (as you've laid the groundwork.) Your beautiful writing voice pulls the reader in until there's a feeling of being there. Having said that, mountain climbing, whether by men or women, requires attribuates that others admire and can learn from. Anything you wrote would appeal to and inspire the larger public.

(I especially loved the mountain photo flanked by the sun and the climbers. Really, really nice!)

I love your mountain photos too! Blue is so beautiful. I know very well that it is not a good question but I can't help thinking of this; "did those early women climbers who climbed in the 50's take any measures to prevent sunburn?" When I climbed high mountains, I was always thinking about my sunblock so...

Kitty: I very much agree with you that all these climbers are a novel unto themselves - actually, I believe that the mountain novelist, Nitta Jiro, wrote a novel based on the life of one of the trio of Tabei Junko's contemporaries - unfortunately can't recall which of the three it was. Tabei Junko and Imai Michiko have written well regarded autobiographies too. But, based on Project Hyakumeizan's experience with Japan's most famous mountain book, I don't see foreign publishers bidding up the price of translation rights any time soon. (*Sigh*)

Sapphire: thanks for a most interesting question. I believe that the history of sun protection among women climbers could provide the meat for a most interesting - and quite lengthy - disquisition. I would start with those redoubtable English lady alpinists of the 19th century - at least one of whom wore a full veil against the sun - almost a hajib, one might say. The question of what lady climbers wore against the sun in 1950s Japan would depend on what was available. In Europe, at that time, mountaineers used to apply a somewhat unpleasant but effective concoction called "glacier cream". It gave a greenish tinge to the user's face, making him or her look a bit like a stray Martian. Alas, I haven't seen colour photos of lady climbers from that era, so it's difficult to say what kind of sun protection they might have been using. Perhaps Nitta Jiro mentions it in the relevant novel....

This was a superb post. It's great to read about these ladies. Until I read your article I was of the belief that Wanda Rutkiewicz and her team of Polish ladies made the first all-female ascent of the N Face of the Matterhorn, but I see that they were pre-dated by about 10 years!

Having climbed the Chuo-ryo on Ichinokuradake, I am very impressed with the determination that those two girls must have had to get themselves up it in midwinter, with a standing bivouac along the way!! Do you happen to know where on the route the bivouac was? Was it at the big ledge above the crux chimney pitch by any chance?

Thanks again for the wonderful writing.

Tony: thanks for reading. As for Tabei-san's winter bivvy (standing!) in Ichinokura-sawa, I don't even know if it was on Chuoryo or another climb. But I'm sure you'll find the answer in her book, Everest Mama-san. Maybe somebody could have a go at translating it too ...:) It must be quite a story, especially the pre-Everest years.

Unfortunately my Japanese skills are nowhere near the challenge of reading it, never mind translating it!! That's the chief reason why I enjoy your blog so much Martin... you give the rest of us access to all this history.

It does make you wonder how many amazing stories are locked away in the various languages around the world... no shortcut there, though...

I just have to say that this is all very interesting and enjoyable to read. However, the number of these tough ladies that met their makers doing what they loved has me thinking twice about the merits of having a hypothetical partner who enjoys climbing to that extreme. My wife can take comfort in the thought that I prefer someone like her who enjoys nature but doesn't need to climb over someone who might not come back alive from a peak experience.