Getting to know Japan's top volcano in mid-winter season.

The truth should have hit as soon as the friendly truck driver dropped me at the end of the Subaru Line road. From the fifth station in late January, Mt Fuji was an alabaster ramp driving into a steel-blue sky – nothing hinted at the elegant cone seen from afar. Still I didn't get it, though. 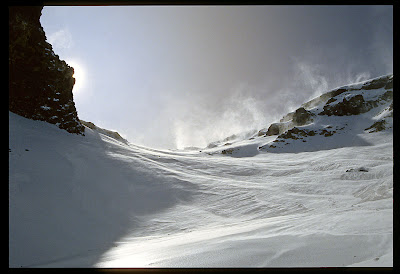 The ice-shards should have been a warning too, as my crampon points sent them tinkling away down the slope. I wasn't even on the climbing path yet, just the mule-track that leads to it. There were no mules or tourists now, of course; the road was banked out with hard-glazed snow.

I’d been here a few months before. Foreign students don’t have cash to spare, so I’d passed on the ¥2,000 bus-ride up to the fifth station. Instead, I’d walked up from Fuji-Yoshida, through solemn woods of cryptomeria. After the fifth station, the trees and the clouds fell away below. A few more hours, on a trail zig-zagging upwards over burnt-red cinders, saw me to the crater rim. 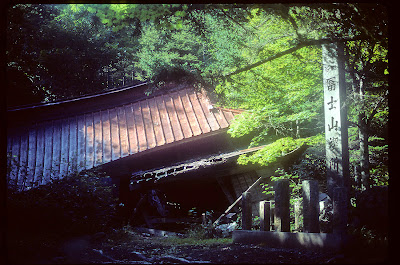 Today, the trail had vanished. And the huts I’d seen last autumn were buried to their eaves. Not snowed but iced in, as if engulfed by miniature glaciers. A wind started to buffet as I climbed away from the shelter of the parking lot’s avalanche barriers. Now the message was sinking in. 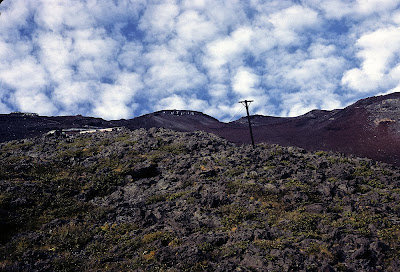 This was not the summer Fuji with its vending machines dispensing exorbitantly expensive cans of Coca-Cola on the summit, nor yet the autumn Fuji, where I’d bivvied comfortably at 3,000 metres on a dry wooden bench outside a shuttered hut. This was another mountain. 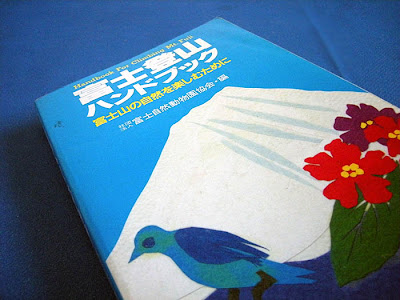 Those who adventure themselves here would do well to consult the Handbook for Climbing Mt. Fuji (富士登山ハンドブック). “Every winter,” it warns, “a number of mountaineers lose their balance in sudden gusts of wind and slide away on the hard snow to their deaths.”

In the days when the summit radar station was operating, four men were lost in such accidents: Nagata Ridge on the Gotemba route is named for one of them. Sometimes the ice was so slick, their guides used to say, that you could see your face in it.

Then there’s the cold. According to the Handbook, daily minimum temperatures never rise above minus 20°C until March. As for the wind, it has been known to exceed 300 kilometres an hour. It’s true that this figure was reached only momentarily, during a September typhoon, but no tropical storm can match the winter gales for sheer relentlessness. In January and February, they can average 60 kph for days at a time.

Many have kowtowed to that wind. For Lieutenant-Commander Thomas Orde-Lees, the moment of truth came fifty-eight years, almost to the day, before my attempt. Not a man to be put off by mere blizzards, Orde-Lees had accompanied Shackleton on his disastrous Trans-Antarctic Expedition.

After surviving the forced sojourn on Elephant Island, he joined the Balloon Corps on the Western Front. By the war's end, he was an officer in the Royal Flying Corps, where he became an enthusiastic advocate for parachutes. This experience brought him to Japan, as an advisor to the nascent Imperial air arm at Kasumi-ga-ura.

It was there that he conceived a mid-winter attempt on Fuji. A trial run, solo, in mid-December 1921, was “dead easy”; hardly any snow lay on the mountain. That emboldened him. With a companion, Orde-Lees set out from Tarobo, the first station on the Gotemba Route, at 7am on January 28, 1922. Lacking skis and snowshoes – they wore knee-high "gum-boots" – the climbers floundered through deep snowdrifts for hours.

A violent hurricane blew up when they came level with the top of the Hoeizan crater, “forcing them to cling on to the icy surface roped together, afraid to move more than a few yards in a whole hour for fear of being whisked off the mountainside”. They backed off, returning to Gotemba in mid-afternoon, after 20 hours continuously moving.

Nursing three frost-bitten fingers and, no doubt, a modicum of chagrin, Orde-Lees wrote that the day had been “rich in experiences”. Then he set out to learn from them. The kit for the next attempt would include snow shoes, crampons, a sledge cobbled together from a crashed aeroplane, and “excellent ice-axes purchased from Mimatsu at ¥8 apiece”.

I was quite proud of my own ice-axe. It was a stubby little ice-climbing number that I'd bought after my solitary week of winter mountain experience – an ice course the previous spring on Scotland’s Ben Nevis (altitude, 1,344 metres). And so, when I saw a lone mountaineer, muffled up in a face-mask and snow-goggles, carefully descending the slope towards me, this was the implement that I brandished in greeting. 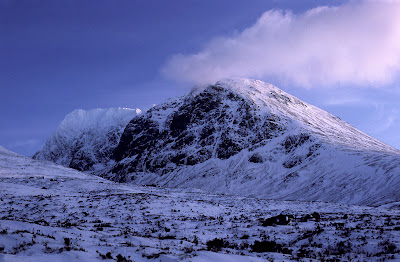 Our courtesies were brief; it was too cold to waste words. The lone mountaineer seemed surprised to find a lone foreigner half-way up Mt Fuji on the last day of January. He glanced at my kit, reading it as one would a CV. The sturdy Grivel 2F crampons, solidly clamped to a pair of plastic Koflach double-boots, appeared to pass muster. But the axe did not: "Too short," was the verdict. "You’d better turn round now," he added, before going on his way.

The lone mountaineer was right, of course. The axe was far too abbreviated to be much use as a prop or brake. Also, it was already getting too late to make a serious summit attempt. And yet ... that white ramp still beckoned; now elegant tendrils of spindrift were unfurling into that impossibly ultraviolet sky. What was it like up there? There was only one way to find out; surely it wouldn’t hurt to go a bit further …

(To be continued)
Posted by Project Hyakumeizan at 7:00 PM

In this case, I went solo because at that time I didn't know any other mountaineers in Tokyo. But if you want a glimpse at the philosophy of a famous solo mountaineer, try the post on Kato Buntaro....

“As I’m not good at skiing or rock-climbing, parties that do those things wouldn’t welcome me as a member,” he explained (冬富士単独行) “And so I more or less have to go to the mountains alone; it’s not because I espouse some sort of rigorous ideology of solitary climbing.” That wasn’t quite the full story, though, as he admitted in another essay (単独行について): “If mountaineering is about gaining knowledge and hence solace from nature, then surely you gain the most knowledge and the highest degree of solace from solo mountaineering.”

that's where i can go with Katou's thought ...

Yes, that's Kato's thinking. Even by today's standards, his soloing was extreme - his expeditions so long, the conditions so tough....

that's why i suggest another way.
Kato got a legend perhaps, but what for, for feeling of personal fulfillment, for fame, or something i do not understand? His family remained with measureless pain, soul devastation like after tsunami ...
good that we've talked abot
i will stay down, reading you
thanks

Yes, we must indeed spare a thought for Mrs Kato and young Hanako. Can anyone tell us what happened to them...