Continued: climbing Mt Fuji in mid-winter has a long and eventful history. Few succeed on the first attempt... 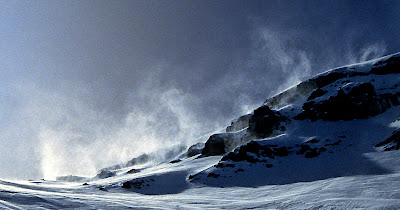 The snow-devils started somewhere above the seventh station. Every few minutes, I’d see one lift from the windward crest and come spinning down the slope. I’d have a moment to plant the stubby axe in the snow and brace my crampons before the wild hassle of wind and spindrift hit. Then I’d make as much height as I could before the next one rose, like a malevolent djinn, from its lair on the skyline.

The relevant chapter in The Handbook for Climbing Mt Fuji, is entitled “The Prevention against Gust and Slip”. It contains a diagram that shows how the prevailing winds break on the leading edge of Fuji’s western face before accelerating to hurricane force – as experienced by Orde-Lees – on the rounded slopes of the Fujinomiya flank. 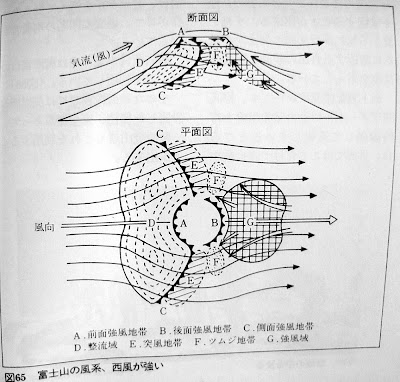 After that, mayhem breaks loose. Giving up on laminar flow, the gale breaks into eddies, back-draughts, and rotors that assail Fuji's eastern side from all directions. On one occasion, the wild turbulence shredded an airliner that ventured too close. It was in this zone of aerodynamic anarchy, high on the Yoshida route, that I now found myself.

A spring storm, probably the warm “Haru ichiban”, hit Fuji on the night before the antarctic veteran Orde-Lees and H W Frost made their second attempt, back in 1921. But it blew out at dawn, leaving the intrepid duo to make a lengthy but uneventful climb. They topped out at 7pm on February 12th. A journalist wrote up the expedition as "The dream of ages”, implying that Orde-Lees and Frost were the first to make this winter ascent. 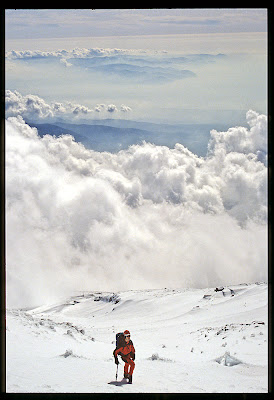 In fact, people had been tackling Fuji in winter for decades, although not always with happy results. The Austrian minister in Tokyo, Count Wydenbruck had a go in February 1897, for which he specially imported "a wonderful pair of top-boots". After these got wet in the snow, low on the mountain, the guides dried them out too close to the fire, drastically shrinking them. Thus ended in fiasco what was probably the first winter attempt on Fuji by a foreigner. 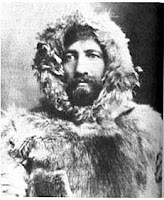 Intriguingly, Frederick Cook is also said to have made an out-of-season attempt on Fuji. This was in November 1915. Today, the explorer is famous mainly for his falsified claims to have reached the summit of Mt McKinley and the North Pole. Whatever his success on Mt Fuji, Cook was too late to bag the first gaijin ascent of Fuji in winter.

This honour probably falls to Francis Lowe and a Mr. G. Guelta, member of the Italian Alpine Club. The pair summited from the Gotemba side on February 1, 1901, not without sacrifice. One member of the party – it isn’t specified which one – was so badly frostbitten in both feet that he was lucky to avoid amputations.

Better documented is the multinational expedition of the so-called “Fuji Winter Ascent Corps” in 1905. Together with goriki (porters) and three policemen, the party set out with forty-three persons – including two foreigners, a Spaniard and a “Miss Sturzenegger” from Switzerland – four rear-guards, five messenger pigeons and a dog.

Starting at Takigahara on the Gotenba route on January 6 at 2am, the climbing members reached the third station at 9am. At the fifth station, Miss Sturzenegger, who was 58 at the time, succumbed to mountain sickness and had to stay behind. The pigeons too were let go here. They all flew safely back to Tokyo on the same day.

Then a blizzard started. Two climbers only reached the seventh station before giving up. Chastened by the experience, 11 of the younger members – all Japanese – formed a “death-determined party” and went back to the mountain three days later. Leaving Tarobo at midnight, they reached the summit just over 12 hours later. "The hilarious victors united in vigorous banzais," it is reported, "and a bomb with a detailed statement was planted in memory of our achievement." 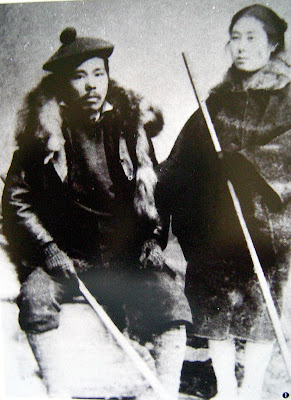 It is significant that the “Fuji Winter Ascent Corps” was seen off from Tokyo by Nonaka Chiyoko, the president of the Konohana-kai, a society of women Fuji climbers, and welcomed to Gotemba by her husband, Itaru. Mounted on a white horse, Mr Nonaka led the group to their base camp, at Takigahara. For these patrons were, of course, the very Nonakas (above image) who had spent a chilly few months on the summit of Mt Fuji a decade previously.

Nonaka Itaru, a meteorologist, built a small weather station atop Mt Fuji in the summer of 1895. Mountain weather stations were then in vogue: an international meteorological conference in Rome in 1879 had called for their construction worldwide.

One was inaugurated on the Säntis, a Swiss mountain, in 1882 and another on the summit ice-cap of Mt Blanc (see image below) in 1893. But nobody had yet collected round-the-year data from an altitude as great as Mt Fuji’s. Thus Nonaka’s venture was intended to put Japan in the forefront of atmospheric research. 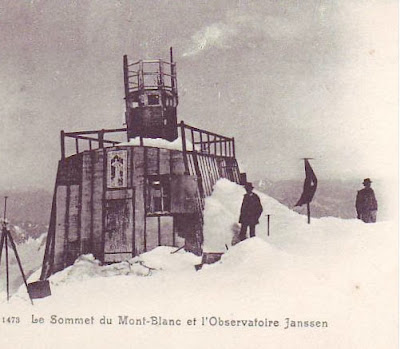 How Nonaka took up residence in the cramped hut in September 1895, how Chiyoko came up to visit him in October and refused to leave, how the couple struggled to keep up their weather observations – every two hours, night and day – in the face of sickness and ferocious blizzards, and how, finally, they were rescued in the nick of time at the end of December, after 82 days on the summit – this story is well known; Nitta Jiro even turned it into a novel.

Before the hut could be built, however, Nonaka had to find out if it would be possible to survive on the summit in winter. There were no statistics to guide him, nobody to ask, because the mountain had never been climbed in mid-winter. Nor could he look to any winter climbing expertise or gear in Japan – the Japan Alpine Club would not be founded for another decade. Nevertheless, Nonaka set out to climb the mountain – solo – in January 1895. We take up this story in the next post …
Posted by Project Hyakumeizan at 7:20 PM

Excellent post. You can't have too many postings on Fuji climbing history.
Was interested to read about Cook and also see the photo of the Mont Blanc observatory. I wonder how it was anchored down.
On the subject of other famous Fuji climbers, I remember once hearing a word of mouth account that Messner had raced up it in little over an hour, presumably not in winter.

good to start with some theory before starting the serious adventure. thanks for suggestion

Iain: thanks for reading and for providing much of the input for this post - you'll recognise the "Dream of Ages" and the ascent by Francis Lowe and a Mr. G. Guelta - both from your invaluable researches. It seems that people didn't wait until modern crampons etc became available to tackle Fuji in mid-winter. Impressive....

Excellent series, Project H... I can't wait to read the next instalment!

Iain, the following is taken from the website of the Fuji Tozan race:
"The record time for the Summit Race is 2:32:40 (2006, MIYAHARA Touru)"

Messner was a tough man for sure, and no doubt a pretty handy mountain runner as well as mountaineer, but it seems unlikely that he would have nipped up in little over an hour at any time of year... :-)

interesting story, looking forward to the next installment.

that diagram from the handbook is rather enlightening. I also like "aerodynamic anarchy"!

Kamoshika - many thanks for reading: yes, the aerodynamics are anarchic. The wind on Fuji in the winter has to be experienced to be believed. Worse than standing on the wing of an aeroplane, as it's so turbulent. You never know what's going to hit you next, and where it will be coming from. As for the next instalment, well, it's already there!

Tony: if Messner was starting Fuji from the Subaru Line 5th station, it's "only" 1,300 metres to the top from there. I think a fit and acclimatised climber might be able to do that in an hour - given that the 2:32 time you quote must be for the full height of the mountain from Yoshida - something like 2,600 metres ... (gasp).

Yeah, the Fuji Tozan race starts at the bottom in Fujiyoshida, so the 2:32 is for the full height of the mountain. Like I said, Messner was no slouch, and certainly a very fit mountaineer AND mountain runner, but this race has been run for a fair number of years, pitting the best of Japanese mountain runners against the mountain. If you've run any big trail races in Japan you'll know that there are some seriously fit and strong dudes roaming the hills out here :-) and the 2:32 time is the best of the best up to now.

I've got no objection at all to a fit runner hitting the top from the 5th station in an hour, but the 5th station is hardly the benchmark for a proper claim to have run up and down Mt Fuji.

Anyway, it's all minor details... A superb mountain, however and whenever you choose to go up it.

I've enjoyed these posts so much! You're leaving quite a legacy on this site, it really is something special and quite unique :-)

PS Please keep trying to find a publisher for your book... I for one would buy a copy at the drop of a hat, and I'm sure there are many others out there who would too... Have you thought about self-publishing sites like Lulu?

Tony: many thanks for your support for the Hyakumeizan translation project - can't be too specific at the moment, but things are looking not-too-bad on the publication front. Self-publishing has many merits, but I think Hyakumeizan might benefit from a more traditional approach, complete with a full introduction, footnotes, bibliography, chrome exhaust pipes and all the other apparatus of a skollarly edition ....

I've heard about the strong gusts which blow in winter, but I did'nt know the precise types and places where they blow. I could learn much from the diagram you cited here. You've experienced that severe winds... I was said "Once you slip, you cannot stop". Every climber/treker who wants to climb Mt. Fuji might have better read your blog before they climb!

Mitch様：thanks for reading. Yes, the dangers of Fuji in the winter are well-known. Yet, sad to say, the accidents continue year after year. Those slopes look so easy, but they are so treacherous.... I once saw a friend slide several hundred metres down the mountain in November. Fortunately, he was stopped by the snow-covered roof of a hut and escaped with bruises. It was a lesson to us.