In those days, on the way back to Tokyo, we'd pull off the Kan-etsu Expressway at the Tanigawa Parking Area, just after the long tunnel. Then we'd slew the weatherbeaten Subaru to a halt next to the public fountain, and fill every water bottle we had.

We might think twice about doing that now. The big city's tap water probably hasn't improved, but it may contain less radioactive caesium than do the mountain streams. That, at least, is my guess after looking at the "heat maps" of radioactive contamination recently published by Japan's science and technology ministry. 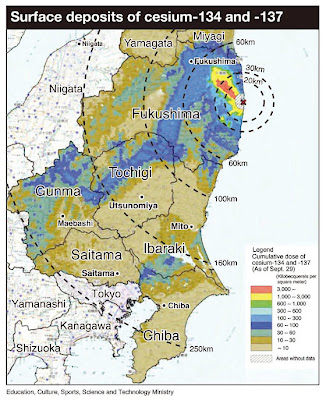 These charts show that the mountain ranges around the Kanto plain have generally soaked up more radioactivity - specifically the caesium 134 and 137 isotopes - than the low ground. Rain falls more heavily in the hills, washing out more of the plume that emanated from the derelict Fukushima reactors.

Quite a few "famous peaks of Japan" stand within the scope of the ministry's survey. What would Fukada Kyūya have made of this modern-day threat to his mountains?

There's no way of knowing, of course, as the Hyakumeizan author died (on a mountain hike) on March 21, 1971. This was just five days before the Fukushima Dai-ichi Nuclear Power Plant officially went into service. It's as if one era ended and another began in that far-off month forty years ago.

Many thanks to Wes for pointing out the relevant post in Michael Cucek's estimable current affairs blog, Shisaku. An article on the science ministry's survey can also be found in the Japan Times, which is also the source of the map shown here.

The earthquake's aftermath has largely faded from the news, as if what's evolving in Japan doesn't exist. However, a very real situation lurks. When we lived in Nairobi, a State Dept. memo warned not to eat local food punched from other than a Green Grocer because of DDT used. Too late this memo came into our hands. DDT is linked to cancer and lasts for nine years in the body. During those years, I was on the table three times for suspected cancer of the breast. Three times I escaped, thank God.

Wow, Kittie, that was a lightning-fast comment. Agree with you that much of the US/European press has forgotten about the disaster recovery efforts, but there are some very honourable exceptions - such as your estimable New York Times, particularly in the person of Hiroko Tabuch, who keep providing compelling and well written updates. And, over on her blog, Sapphire Sky has just published an excellent summary of progress towards "cold shutdown" at Fukushima and decontamination too...

I have since published a much more comprehensible map of the cesium contamination on my blog, the Japan Times map being almost criminally misleading in its color scheme.

Project H (and MTC), thanks a lot for posting this. It potentially has a huge impact on those of us who are running, hiking or climbing in these mountains and regularly filling our bottles from the mountain streams. If you get any more info like this it would be hugely appreciated if you would repost it.
All the best
Tony

MTC: many thanks for the additional information - I've put in a link to Shisaku in the blogroll, so that readers of this blog can find their way to your updates.

And, Tony, I've added two links to relevant Japan Times articles at the bottom of this post. Mmm, this is a hazard that we Showa-era mountaineers never dreamed of in our worst nightmares....

Thanks indeed for reposting this frightening chart. The Minamisoma volunteer center would appear to be in the orange part, and thus blanketed in 2-6 times more cesium than would require annual monitoring near Chernobyl. I think my volunteer days are over.

From the Japan Times link: "Hourly radiation readings in the area was between 0.2 and 0.5 microsievert, but few spots had radiation levels between 0.5 and 1.0 microsieverts, ministry official Hirotaka Oku said."

I'm not familiar with becquerels but going on the above quote I don't think that is cause for great alarm. That's still a fairly low reading and I think even with constant exposure to 1 msv your long term risk of leukaemia is still low. Is it really that much worse than the radiation exposure from jetting round the world and climbing high mountains?

Iain: there speaks the voice of common sense - probably you are right, although I would like to hear the opinion of a radiologist or the like on this topic. Quite clearly, the worst danger is close to the reactor, not in the mountains. However, there is also the danger of hotspots - see the article in today's Economist (linked from the bottom of this post). Hanameizan: this might be of interest to you ....

Thanks for the Economist link.

Meanwhile, the Japanese seem quite happy to soak for hours in a radon onsen ... perhaps those radiotherapeutic waters really are curative if you've got metastatic
cancer.

I feel much more at risk every time I drive on the roads, where 5,000 people are butchered each year and no one bats an eyelid.

The Economist and NYT articles (plus comments) make interesting reading. I sincerely hope that these hotspots can be "cleaned."
I also came across a piece in the Guardian reporting on a house in setagaya ku with bottles or test tubes of radium emitting abnormally high levels of radiation. The mind truly boggles..

Hanameizan - thks for pointing out radon onsens. I had never seen those two words together before. I will do some more digging in this area.

Iain: apropos radium hot springs, the closest to Tokyo I know is this one (between Kofu and Nirasaki). Have driven past it a few times but, alas, never dipped a toe in it ...

With regards to natural background radiation in mountains I'd also be interested to know what the radiation readings are for some of the highish granite climbing spots such as Chamonix, the Albignia valley, Yosemite and the Wind River range in the US. Plus how do they compare to some of the Japanese ones.