Getting to the foot of the irresistible ridge takes longer than expected...

Skiving off work early on Friday, we sprinted through Shinjuku station on a sweltering summer's afternoon. If we missed the 2pm Azusa express, we'd probably not finish our climb in time to park our black office shoes under our respective desks on Monday morning. 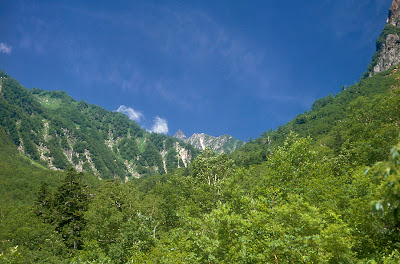 The day before, we'd run our plan by Etsuko, who worked for a foreign bank's operations department. That is, when she wasn't climbing tough routes in Tanigawa. Etsuko hadn't been positive: "Friend of mine fell off it in spring - never found the body. I think you should go for something easier," she said, looking vaguely intimidatory as she stood there in her blue office suit, arms folded.

Since Donald and I had only recently arrived in Tokyo, we sought Etsuko's advice for most of our alpine projects. And, like as not, ignored it. What deafened our ears to the voice of good sense this time was the encomium we'd found in the Climbing Guide to Japanese Mountains Volume VII: "With its illustrious history, the Kitakama Ridge of Yarigatake is a classic alpine route that calls into play every aspect of mountaineering skill." 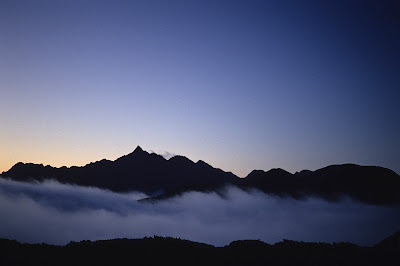 That irresistible write-up propelled us first to Shinano Ohmachi, the Big Town in the highlands of Shinshu. Alighting there from the train, we just had time to threw down a katsu-donburi before taking a taxi up into a river valley as far as the second of three dams. We started walking at dusk, up the sloping face of the third dam, and then along a wooded valley. Above its velvet-black walls, the Milky Way luminously marshalled us forwards.

The stars shone steadily, undimmed by haze, as bats flitted in and out of our head-torch beams like night fighters. The weather would be good tomorrow. After three hours, we reached the Seiran-sō hut at Yumata for a late-night beer and a dip in the onsen. The sulphurous waters eased our muscles while steeping us in a vaguely Mephistolean scent. Fortunately, it was too dark to see our ridge looming up to the south.

Next morning, we woke at four and set out at five. From the map, we reckoned we'd deal with the approach to our ridge in about two hours. We reckoned without "friction", as infantry tacticians might call it. The path southwards, overgrown with waist-high panda grass, hinted at what lay in store. Few seemed to pass this way. 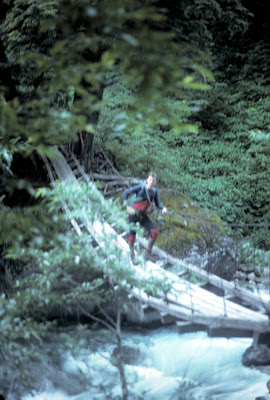 And with good reason. The path led to a derelict suspension bridge that careened towards the rushing waters of the Amagami river. That took us into a deep gorge, which we traversed warily, now boulder-hopping just above the water, now crab-crawling worrisomely across washouts where the old trail had crumbled away. At one point, we teetered over a scarp-face on half-collapsed wooden catwalks.

The river has to be re-crossed just before the Deai, a meeting of streams. But the bridge marked on our sketch-map had quite vanished. With misgivings, we inspected the waist-deep torrent of meltwater and judged it worthy of our rope - the only time we would use it. After Donald had fixed a sling around a tree, I launched myself into the current like a high-speed drogue on the end of a log-line. The bracingly cold water surged up to my neck before I got across, gasping, to the other side. 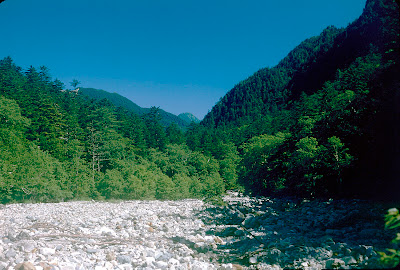 Five or so hours after leaving the Seiran-sō, we squelched our way out of the shadowy gorge - taking our boots off for the river crossing had been out of the question - and emerged into a green amphitheatre, bounded to the east by the green walls of our ridge, still flecked with snow. At our feet, the mid-morning sun reverberated from a dazzling flood-plain of white boulders.

Only now could we appreciate the scale of this ridge - we'd taken five hours just to bush-whack along its base, covering perhaps one-third of its five-kilometre length. And we hadn't yet gained much height towards that serrated ridgeline at 3,000 metres. We glanced anxiously at our watches; at least, the day was still young.

Our sketch-map showed that we should climb the gully opposite the ruins of a hut. But the encroaching woods had covered all traces of this lodge, leaving us without a clue as to the right gully. Unfazed, Donald took a compass fix off the spike of Yari, which now rose diffidently above the riotous press of trees, and proclaimed that we stood more or less in the right spot. 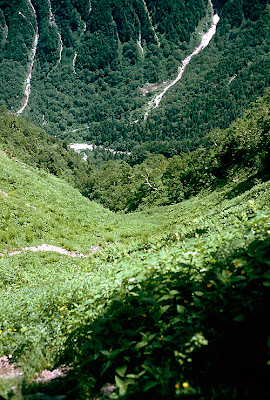 And he was right: walking over to the base of the ridge, we spotted a cairn, half-hidden in the weeds. A rugged scramble ensued, over boulders and the occasional dry waterfall. 11.30am saw us to the ridge-line, which at this point (between pinnacles P7 and P8) is still wooded. The weather was still perfect and the gully had yielded up to Donald a Goretex bivvy bag, fortunately without its former occupant. 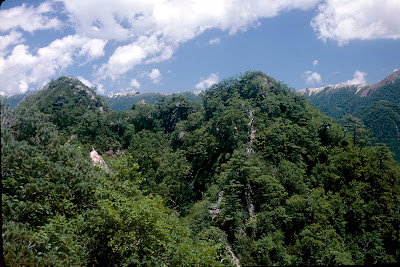 More abandoned kit littered the small patch of level ground on the col. Clearly this was a happening kind of place in the snow season. I was about to sit down for a bite of lunch when Donald raised his hand. "Let's move out of the sh*t zone first," he said.