The lost wolves of Japan

A history of Japan's wolves packs some hard-hitting ecological lessons

Excuse me while I howl. I’ve been reading Brett Walker’s book on “The Lost Wolves of Japan” and it’s a sorry tale. Japan’s last wolf was killed by hunters near Washikaguchi, in the eastern Yoshino mountains, in January 1905. A monument marks the spot. 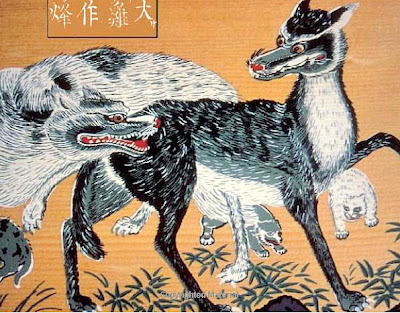 For much of Japan's history, wolf and human had rubbed along well enough. Wolves rarely attacked people, and people tended to hunt them only when lupine depredations got out of hand. (It seems that Japanese wolves had a special weakness for fresh horse.)

Indeed, the wolf was often seen as a kind of guardian spirit. Up near Morioka, in the North Country, when farmers encountered a wolf, they’d ask “O lord wolf, what do you say? How about chasing the deer from our fields?" Elsewhere, at shrines dedicated to a wolf-spirit known as the Large-Mouthed Pure God, his help was invoked to keep the fields clear of deer and other pests. The Ainu elevated the wolf to an even higher place in their pantheon. Their wolf-deity, Horkew Kamuy, is the hero of a resurrection myth.

The live-and-let-live attitude to wolves ended in the eighteenth century, when a devastating rabies epidemic spread through Japan. Infected wolves turned into ferocious killers; some even came down into the villages to attack people. (In Kaga, it is recorded, the animals acquired a particular taste for young serving wenches.) Village councils and feudal authorities took the matter in hand, organising mass hunts to deal with the menace.

In Hokkaido, the story was different. When modern ranches were set up in the 1870s to raise cattle and horses, wolves threatened their profitability. In one case, the Niikappu ranch lost 90 foals to wolves within a week. Why were those Hokkaido wolves so aggressive? Perhaps because they were hungry. The woodland deer on which they would normally feed had been decimated by severe winters and also by human predation – canneries had recently been set up in Hokkaido to export venison.

Whatever the reason, the ranchers responded without mercy. Taking their cue from American advisors, they set out traps laced with strychnine and even dynamite. An effective bounty scheme was set up: a wolf pelt or set of feet was worth seven yen. Wolves appear to have been extirpated in Hokkaido before they succumbed in Honshu.

A century later, many of Japan’s mountain regions are overrun with deer. Overgrazing has stripped hills that just twenty years ago were still lushly vegetated. If wolves still existed, they certainly wouldn’t go hungry.

Do they still exist? From time to time, hikers or foresters report that they’ve seen large dog-like creatures running through the woods. A few years ago, writes Professor Walker in his epilogue, members of a wildlife protection committee played recordings of howling Canadian wolves in the woods of eastern Yoshino - in the hope of luring out any survivors. But the forest remained silent.

This post is (misleadingly) tagged as a review, but it can't in this space do justice to the depth and range of Professor Walker's book - which also delves into the evolutionary history of the Japanese wolf; investigates the question whether, in fact, there were two species of wolf or wolf-like creature roaming the backwoods; and compares various theories about the wolf's extinction.

See also Wolves in the snow: should Japan reintroduce the wolf?
Posted by Project Hyakumeizan at 8:13 PM

Sad indeed. I don't suppose that the urge to reintroduce, as they are trialling in Scotland, would go over any better in Japan than it is in the UK.

The deer are destroying fauna ever higher recently. I noted huge piles of gnawed pine cones at over 2600m the other day. Would that we had a wolf or two around...

Thanks for reading and for the gnawed pine-cone update. Reintroduction? Hmm, I wonder how it would feel to bivvy out in a remote place with a wolf pack howling in the vicinity...? Here in Switzerland, wolves are reintroducing themselves, by slipping over the border from Italy. Every time one establishes itself, the country is split between urban greens (pro-wolf) and the farmers, whose trigger-fingers start itching. Problem is not only that the wolves prey on the sheep, but that they always seem to kill more than they need to eat...

Thank you for another wonderful page about mountains (and their fauna) in Japan, Captain,
Beatrice

Sad story, reminds me of the Tasmanian Tiger extinction.
http://www.dpiw.tas.gov.au/inter.nsf/webpages/bhan-53777b
A new Australian film has come out called "The Hunter" filmed in the Upper Florentine Valley in Tasmania. great mountain landscapes- filmed in the same area, with the same camera man, I worked with a couple of years ago.

Bea, Birdmonkey: thanks for reading - that's an interesting parallel with the Tasmanian Tiger - indeed, wasn't it also called the Tasmanian Wolf? There's yet more about the Japanese wolf, including the intriguing and un-obvious story of how, when it disappeared, it took the wild boars of Tohoku with it. But that's another tale, to be saved for another post ....

The Tasmanian Tiger was a marsupial dog (pouch young) mostly displaced on the mainland by the Dingo (a native dog canines lupus dingo) brought to mainland Australia by early Aboriginal people walking over from Indonesia. As you can see from the latin name, it is considered to be closer to the Asian wolf than a domesticated dog.
There are Dingos in the national park close to Canberra where I work. I have seen them most times I walk in that area. They are vey nervous of humans in that area, an an encounter usually envolves a stare off till the Dingo moves on.

I am not at all "programmed" to be fearful of animals- only reptiles- I can't imagine how I will react if ever faced by a wolf- or worse a bear.