A digression on debonair: how Taishō mountaineers set a sartorial standard that will never be excelled

My, they were snappy dressers in the Taishō era (1912-1926). Mass mountaineering may have come to Japan in that reign, but that doesn't mean they settled for plebby standards of attire. Au contraire. 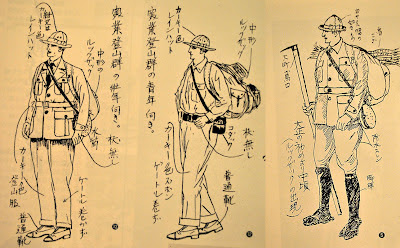 Here (above) is the compleat Taishō alpinist. He sports a vaguely paramilitary tunic surmounted by an elegant white tennis hat. The alpenstock is de rigueur in steep snow gullies - as modelled (below) by Mrs Hisa Takeuchi, seen tackling Chōjirō-dani on Tsurugi in 1920. 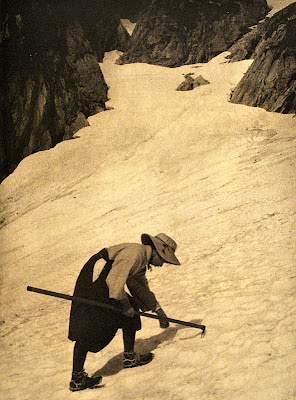 Somewhat less ladylike - in her very practical bloomers - is Murai Yoneko (we've met her before), shown (right) atop Kita-Hodaka on her way over the fearsome Dai-Kiretto in 1923. Note that she's shod in straw sandals (waraji), the footwear of choice for exposed and delicate climbing. Some folk still wear them for sawa-nobori. 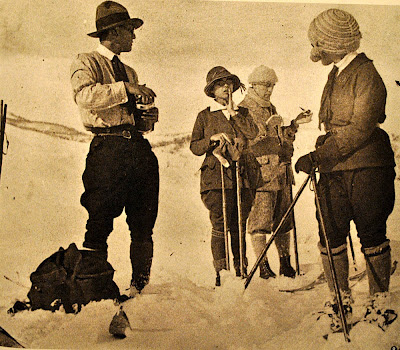 Nor is yama-ski (ski-mountaineering) any excuse for slovenly dress. The gentleman on the left is wearing a tie, as is proper in the presence of that formidable Mrs Murai. Yes, that's her again on the right, this time on skis. When it comes to pioneering all-round mountaineering for women, Murai-san wears the trousers.

Ski technique hasn't evolved much from the methods introduced by good old Lerch-san in the previous reign. The winter sportsman (left) is accoutred in khaki knickerbockers that must owe something to the Imperial Army. He looks a little tense, as well he might. To ski clutching a single Zdarsky-style pole is distinctly retro, even for Taishō 6 (1917).

Their fashion sense may have been a little "hai-kara" (upper crust), but snobby they weren't. Everyone was welcome as long as they looked the part. This student affects the yama-nadeshiko style. But don't underestimate her: with those all-terrain straw sandals on her feet, even the Dai-kiretto holds no terrors. 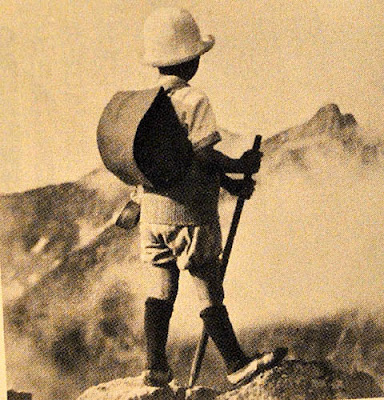 Children too can go out to play in the Japan Alps, if they dress like Christopher Robin. That school satchel on the boy's shoulders is a "ranzen". The word comes from the German, like the names for pretty much every other bit of mountain kit these days - eizen for crampons, zeiru for rope, pikkeru for ice-axe. 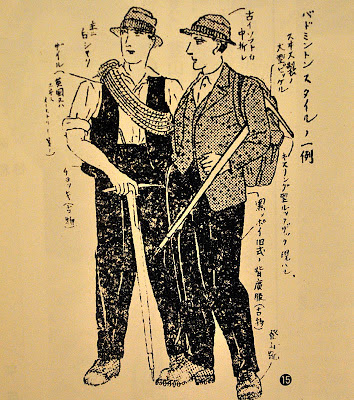 And so we come to these two louche-looking characters. You can tell at a glance that we're no longer in Taishō. No tunic, no puttees, and (of course) no tie; standards are slipping. This is how they're dressing down in early Shōwa. Have they no sense of style?

All photos copyright of Yama to Keikoku illustrated history of Japanese mountaineering (目で見る日本登山史 by 川崎吉光、山と渓谷社).

More about mountaineering in the Taishō era: Above the clouds
Posted by Project Hyakumeizan at 9:55 PM

Murai Yoneko's bloomers look very fashionable. In fact, they may be coming back with those yama-girls you see on Japanese mountains these days. They are usually wearing skirts, but on windy days, they can tighten the brims of their skirts, which look like bloomers. When I saw them on Hakusan on a very stormy day, I thought they were very charming and practical, and maybe good to wear.

Your post has lightened my morning, thank you. Wonderful.

For a snapshot of the modern mountain woman, try a google image search for 山ガール.

Good to hear that some classics of Taisho style are coming back into fashion. Murai Yoneko would be pleased. But I wonder if you can still see those very traditionally dressed university "Wandervogel" club members in the Japan Alps these days - you know, all dressed in identical sets of grey woollen knickerbockers (very Taisho) and matching red or blue shirts? And probably carrying those amazing "Kissling" backpacks, wider than they were tall. Sad to say, I guess such figures from the past are now quite extinct. You could still see them sometimes in early Heisei, in places like Tokusawa....

Wonderful! However I shall have to hide this post from the Other Englishman, who's penchant for the kit of yesteryear has gotten us into more than one scrape...

Have you read "Invisible On Everest" by (legendary kit maker) Mike Parsons?

Chris: thanks for reading - and for alerting me to "Invisible on Everest". I dropped into the Zurich Zentralbibliothek on the way home and - astonishingly - they were able to dig a copy out for me. It seems to be of somewhat, ah, specialist interest. I will give it a quick scan. It reminds me that, years ago, YamaKei magazine did an article or series on the history of Japanese gear makers. Maybe I'll get to that topic one of these days. As for your gear-induced epics with the OE, you whet our appetite for another post soon on i-cjw soon....

Thank you for this very interesting post! I enjoyed reading it a lot! I think Yoneko's
mountaineering jacket, bloomers and waraji look lovely. I prefer yama-girls in the Taisho period to umi-girls who wore zebra-striped bathing suits...

Well that's a novel way to bring us a sneak peek of Mamut's next autumn catalogue :-)