Concluding R W Atkinson's excursion to the high mountains of Japan in 1879 - Part III: a close shave on Hakusan and then onwards to Tateyama.

Following a stream bed towards the upper slopes of Hakusan, Atkinson and his companions scrambled into a narrow and steep gorge. Their guides went on ahead ...

At first we did not appreciate the danger, but while waiting unconcernedly the ascent of the first coolie, we were suddenly started by his frantic shouts and by the sound of something falling. Instinctively creeping in towards the side and under the shadow of the rock, we were only just in time to avoid a large fragment of stone, which would have been certain death to any one in its way. After that experience we were more careful. 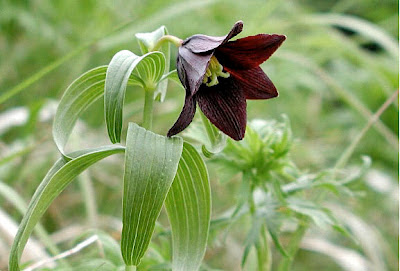 Then the danger was past and they were moving through a field of "curious little" black lilies (Fritillaria camtschatcensis). We almost seemed to have risen from hell to heaven, thought Dixon.

In another half an hour, they reached Murodo, "a wooden house inhabited during the summer for 80 or 40 days by a priest and hotel-keeper in .one, who not only provides for the material wants of the pilgrims in the shape of rice, but also attends to the spiritual cravings of their nature by accompanying them to the summit, from which he points out the principal mountains to be seen."

Unfortunately no mountains were to be seen when they arrived, and the growling of thunder nearby obliged them to wait out the afternoon in the hut, half suffocated by the smoke from the burning logs in the middle of the floor. 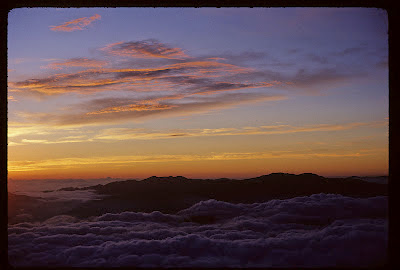 Before dawn, they could stand the fug no longer and escaped into the chill air outside the hut:-

The air is crisp, perfectly calm, and comparatively clear, a crescent moon floating in the pale firmament above the rounded summit of the mountain, one or two lower peaks looming out of the mysterious depths of space which bathe the mountain all around.

Clambering up to the summit in twenty-five minutes, they gazed out over a sea of clouds towards the mountains of Hida. (There were, as yet, no "Japan Alps": the man who would popularise them was still a toddler in Shikoku). Then they inspected the beautiful northern summit lake, with its turquoise waters. 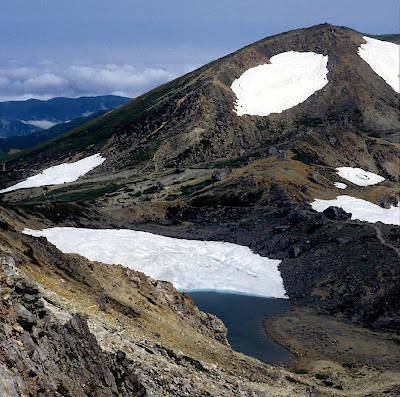 Later that day, they soaked away the aches and bruises of the climb at the hot spring of Yumoto. Again, Atkinson's analytical nose came into play:

There is only one bath, which is divided by a railing into two parts, for men and women respectively. The water is muddy and of a greenish colour, whilst the towels which were hung out to dry had a reddish tint, proving the presence of a proto-salt of iron dissolved in the water, probably ferrous carbonate dissolved in carbonic acid. Besides this there is a spring the water of which is charged with carbonic acid, though not quite so strong as the Nassau waters. There were no signs of any sulphuretted hydrogen waters, which, taken into account with the very slight evidences of volcanic activity mentioned above, the hot springs and the solfataras, indicates that the volcanic forces are feeble in this mountain compared, for example, with Tate-yama or Asama-yama, or even Fuji-san.

A day or so later, they were rolling across the plain of Kaga in a "kuruma" when they met a police officer attempting to spray passing travellers from a minute bottle of carbolic acid. In Toyama, it seemed, scores of people were falling ill from cholera every day and the inhabitants were attempting to propitiate the irate deities by hanging shimenawa (sacred straw ropes) all over the town. 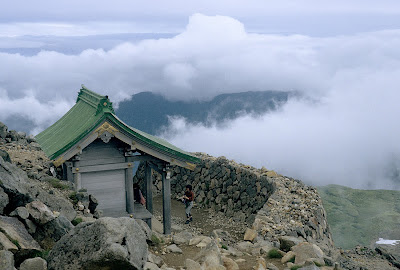 On August 8, the trio would have been in sight of Tateyama, had not low clouds hidden the mountain from view. After the heavy rains, the sound of boulders grinding along the bed of the Jōganji-gawa (The River of the Higher Vow) "was like the sound of a distant cannonading". They followed the river ever higher:

The scene became grand and savage in the extreme; huge boulders scattered about the bed - immense, bare crags rising sheer from the river, and the roaring, rushing stream, carrying down stones with a noise which sounded like thunder - all combined to impress one with the grandeur of the Dashi-wara-dani.

At one place, the rains had washed the path clean away, leaving a steep talus of loose earth. "This is ticklish work," Dixon remarks to his companions, as they dig their sandalled feet into the soft soil and try to get a firm footing:

On the left the unstable bank glides down to the cruel boulders of the rivers bed. "Don't speak until we are across," is the reply. Such landslips become so frequent, that soon we are obliged to descend into the channel, and make our way, over stretches of sand that have not yet been disintegrated, among, and often over, the grey, white, black, purple, and crimson boulders that lie in wild confusion.

Following the mountain stream upwards, over ladders of small cascades, they reached the summit plateau. The Murodo hut was even more dilapidated than that of Hakusan. The latter, at least, had been furnished with a proper door. But, despite the freezing draughts, the annoyance from the wood fire was quite as great. Another wretched bivouac ensued.

Yet these discomforts were forgotten next morning. The guide woke them early and they stumbled out into the frigid night to see all the peaks appearing grandly through the moonlit air. Soon they were mounting over snow slopes to the highest peak - and now Atkinson could understand why the mountain is called Tateyama (Standing Peak) "for it rises head and shoulders above any of the others, and serves the mariner as a beacon". 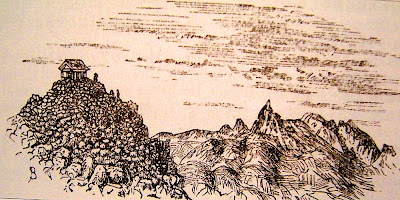 From the summit, crowned with a very picturesque temple (above), they looked out over mountain after mountain rolling away in the distance until they ended in the beautifully formed cone of Fuji-san, on the opposite coast of Japan.

Dixon was especially taken with the view:-

The effect of this vast assemblage of mountains rising into the dawn- flushed sky is indescribable. They were singing the one hymn to Christ which for ages, though little understood, they had been singing: "In the beginning was the Word, and the Word was with God, and the Word was God. . . . All things were made by Him." Below our feet was a sheer precipice, which descended into a rocky valley ; but, with this exception, the eastward view consisted only of peaks rising out of a sea of clouds.

It's probably no surprise that Dixon will take holy orders when he leaves Japan. Just then, however, his reveries were interrupted by the arrival of a party of pilgrims. Fascinated, he and Atkinson watched the preliminaries to a "mountain service":

After some time had been spent in conversation with the priest ... the priest sank on his knees in front of the shrine, with all the pilgrims kneeling around him, and offered up a prayer in which the names Tateyama and Ishikawa occurred many times, after which he clapped his hands and a general cry of "namu amida butsu" followed, and when the prayer was ended the most devout said " arigato". The priest then rose from his knees and addressed his audience, giving them an account of Izanami and Izanagi, after which he brought out various relics - a spear, a sword, various coins, and a mirror - all of which were received with exclamations of astonishment and intense satisfaction. Rice and sake were next distributed, upon which the pilgrims departed, having paid their pence beforehand.

After two hours on the summit, Atkinson and his colleagues started their descent to the Kurobe valley. Two days later, they reached the roadhead at Shinano Ōmachi. They'd been away a month; now it was time to make haste. We catch a glimpse of them spinning, in a convoy of six "jin-riki-shas" across the base of the volcano Asama. Then they picked up "a coach galloping through the darkness to Takasaki".

And such is the headlong pace of their rush back to Tokio that there's no time to reflect on the central irony of their summer trip to Old Japan - that they've been summoned here, on government orders, expressly to modernise it out of existence...

Text references: see first post in this series. Top picture is from Wikipedia. Bottom image: Dixon's sketch of the Tateyama summit shrine is from from YamaKei Me de miru Nihon no Tozanshi.
Posted by Project Hyakumeizan at 7:42 PM

Great read. I find it so interesting reading of the old hardships of travelling in Japan as well as the climbing history. To add to your last paragraph, Dixon wrote that on their trip they "traversed 640 miles and no fewer than 430 of these on foot."

Bravo, another wonderful story. I find these old accounts fascinating. And there's nothing like a few 'ticklish' bits in the hills to get your blood running.

Certainly an exciting adventure. Despite the present day modernization, it is thankfully still possible to experience a bit of their thrills in the mountains of Japan. I might just share this three-part story with a student of mine who would especially appreciate the accounts of the old towns and descriptions of agricultural life.

Iain: many thanks for that reminder of the distances covered - will splice that into the text.

Willie: exactly - it seems there was no easy way up the high mountains in those days.

Tsubakuro: yes, the descriptions of agricultural life are even more interesting than the mountain passages. More has changed in the fields than on the mountains.

I came across your pages when researching for a set of history pages for the Cardiff Naturalist's Society of which R W Atkinson was twice president and gave many lectures, some of which were based on his time in Japan.

if you are interested my page is at http://cardiffnaturalists.org.uk/htmfiles/150th-27.htm and includes a number of pictures of him later in life

Andy: many thanks for taking an interest in this post - I'm delighted that it's been of use. One day, I would hope to track down the texts of those lectures by Atkinson that are detailed on your excellent webpage. The one about the island volcano looks particularly intriguing ...