Continued: the mountain explorations of Professor Atkinson and his colleagues in the summer of 1879. Part II - escape from Yatsugatake and sawa-climbing on Hakusan.

Atkinson and Nakazawa were on the narrowest part of the ridge when it started raining. The worst piece of climbing was where the branches of the creeping pine hung over the abyss and nobody could be certain of stepping upon and not over the ridge: “This part, I confess, I got over on hands and feet in fear and trembling, sincerely glad that we did not intend returning the same way …” 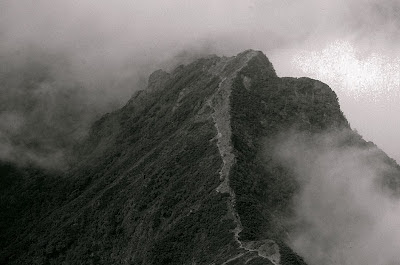 But they did have to return the same way. Aka-dake was already looming above them when the guide reported an impasse ahead; a chasm had apparently opened up since his last visit. To add to the party’s troubles, a full thunderstorm now broke out, deafening them with one of the most violent peals of thunder that Atkinson had ever heard. Or ever wished to hear. Back on Mikaburi-yama, they went astray in the tangled wood, the guide lost all confidence, and it was Mr Nakazawa who found the way back to the hot spring hut using a compass. 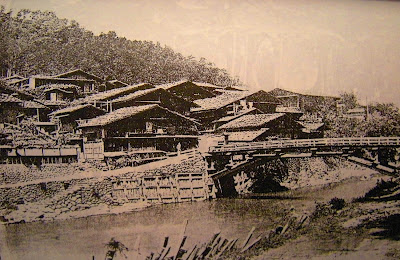 Quieter days followed, travelling northwards across Shinshu. They passed through villages with many a silk-winding establishment and they visited the famous shrine of Suwa. A road like a “well kept gravelled path” led them towards the Gombei Pass over to Fukushima (above) on the Nakasendo road. Like all large towns, griped Atkinson, it possessed no good hotel; “we stayed at the best and found it very indifferent”.

The next night they stayed at Odaki, a staging place for pilgrims on their way to Ontake:

The time for the great incursion of pilgrims had not yet arrived, but even now there were a great many in the tea-houses. They form themselves into companies, and, under the guidance of a leader, who is generally elected on account of the number of times he has made the pilgrimage, start on their journey on a particular day, and are expected to arrive. at the various places on their way at fixed times. On that day the hotel keeper suspends, in a conspicuous place, one of the small flags seen hanging in front of the house, with the badge of the band expected, or already in the house. 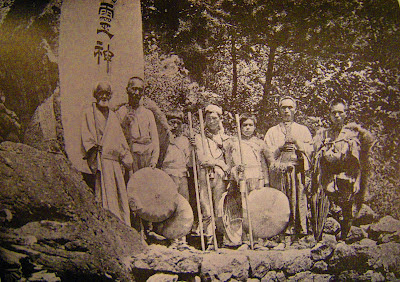 The mountain paths were narrow. On the pass over to Hida, one of their pack-horses fell 120 feet down a mountainside. By a minor miracle, both the beast and their baggage were recovered unhurt. On another watershed, they were plagued by hornets; the guides provided them with strips of bark that, when lit, gave off a “stifling smoke”.

Every day they moved deeper into the countryside. At Kaware, they noticed that the mulberry trees were cultivated in the old fashion, growing up into tall trees. The fields looked like orchards, an effect much more pleasing than the modern style espoused in Shinshu, where the trees were pollarded down. “Never had I been so much out of the world as I now was,” thought Dixon. 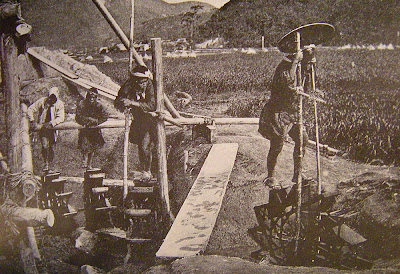 By the time they reached the Shirakawa valley, with its steep-gabled houses, they were so deep in that people in the villages no longer regarded them as “objects of curiosity”. Indeed, one old man “professed the greatest astonishment” that the Englishmen were not high-ranking Japanese officials.

At long last, they were in sight of Hakusan. At 10.30 am on July 31, they started out from Miboro. Soon they were scrambling over steep rocks and wading to and fro across a mountain stream. Like many a future sawa climber, Atkinson was forced to rethink his footwear:

Up to the first fording I had been walking in boots with waraji (straw sandals) underneath, but on exchanging them for tabi and waraji, I found the latter so good for this kind of climbing, not only because of the ease with which one can wade though water, but also because the footing on smooth rocks is so much firmer, that I continued walking in them to the summit. 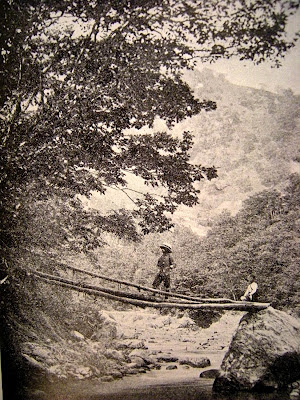 Even with the correct footgear, Dixon found his first river-climbing excursion quite taxing:

We were now climbing a perpendicular wall of rock, fitting our feet into the crevices and pulling ourselves up with the assistance of twigs; again, cautiously terracing a sheer precipice, a deep green pool gleaming far below the narrow and shaky tree-trunks which formed our road; again, clutching at withes to prevent ourselves from sliding with dangerous rapidity down a slippery declivity. There were scores of places where the utmost circumspection was necessary to avoid a fall either into the river or among sharp stones or into entanglements of brushwood. And now we have descended, or rather slidden, to the river's bed, and are leaping from boulder to boulder, — above, crags and tier upon tier of foliage, — in front, behind, and around, the flashing of the white rapids. A point is reached, where it is necessary to ford the stream. One or two of the guides are already stemming the current with the water considerably above their knees. It seems to take all their strength, loaded as they are, to resist the force of the stream. Presently, laying down their loads on the farther bank, some of them return to our assistance; and, grasping the sticks extended to us, we each stagger across the current. 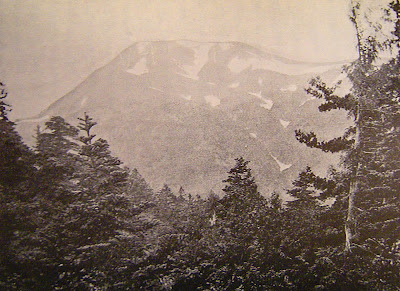 Yet, when this moment of peril is past, he becomes perhaps the first Englishman ever to comprehend the true joys of sawa-nobori:

The scenery of this glen was simply glorious. At one place where we had to ford the torrent three times in about ten minutes, the rocks rose almost sheer on each side, brightened with crimson azaleas and with the early autumn tints of creepers. This gorge led to an open semi-circular space with a beach of glistening white sand, above which in striking contrast towered pinnacled crags, surmounting multitudes of dark cryptomeria spires, — a sublime natural cathedral, where the 'voice of streams' ever rises in melodious echoes up to the throne of God. 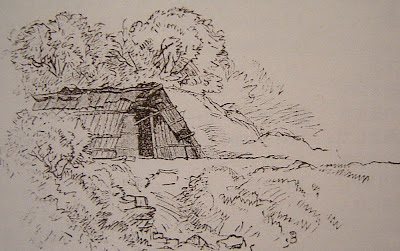 Next day, after overnighting in a woodcutter’s hut (above), they passed a hot sulphur spring and some steam vents before encountering their “first glacier or more properly snow slope”. This they ascended easily, driving in their iron-shod poles for support. The second snow field was steeper, but the most dangerous part of the ascent was yet to come. This was a narrow and steep gorge, well named Jigoku-dani, “which we might translate freely as the valley of the shadow of death”.

At first, though, they saw no danger in the place...

Text references: see previous post. All pictures except top and bottom ones are from Walter Weston, Mountaineering & Exploration in the Japanese Alps. Bottom image: Dixon's sketch of the woodcutter's hut on Hakusan, from YamaKei Me de miru Nihon no Tozanshi.
Posted by Project Hyakumeizan at 7:39 PM

Reading your excellent account of Atkinson's ordeal reminds me of some of my own adventures into Japan's backcountry. I'm still amazed how they were able to do it without any of the modern gear and technology of today.

Perhaps you could include some sort of map highlighting the journey that they took? I'm not sure if some of the place names referred to in the book have changed? I assume the Yosemite-like peaks of Chichibu are the mountains of Ryokami or perhaps Myogi?

Wes: thanks for reading. No, Atkinson, Nakazawa and Dixon certainly didn't have modern kit - they needed six jinrikishas to transport themselves on the road. So lightweight they weren't. But they had something far more valuable than kit - and that was time. In all, the trip described in Atkinson's paper took more than four weeks. Ah, those leisurely days ....

I am trying to picture the exact route on the map...