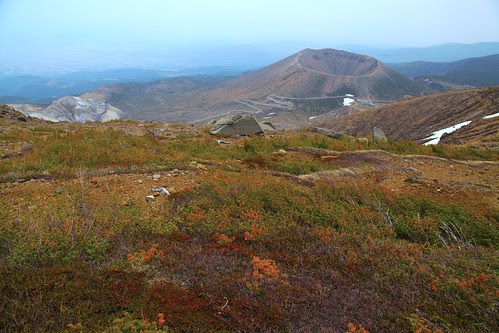 Ink: On Azuma-yama, from Nihon Hyakumeizan (One Hundred Mountains of Japan) by Fukada Kyūya (1964):

To call it simply "Azuma-yama" could be misleading. For few mountains sprawl with as much abandon as this one. As the massif sits astride the border between Fukushima and Yamagata prefectures, it is much visited, but most people confine their attention to a mere fraction of its entirety.

No one peak rises above the others to define this massif. At the same time, ten of those summits exceed 1,900 metres, a rare height for Tōhoku. Yet all are squat in shape and lacking in distinctive features, making it hard to tell them apart from a distance.

True to its name, one of these peaks, Azuma-Kofuji, does show some character. At a mere 1,700 metres, though, this miniature Fuji can hardly serve as the massif's representative summit. Nor does the way in which the names of East Azuma, Middle Azuma, and West Azuma are scattered about do much to distinguish the topography. Holding their own against their peers, Issaikyō-yama, and the East and West Daitens are peaks in much the same genre ....
Posted by Project Hyakumeizan at 9:43 PM

I don't recall but whichever peak is the highest - east or west - I climbed the other. From my hike I had a view of some of the craters and it was interesting to note the transition of the ecology by age. Take Kofuji, a rock-strewn pit with only scrubby vegetation clinging to the slopes which are at their angle of repose. The crater looks like a giant antlion nest. Nearby Okenuma and Goshikinuma are water-filled craters. Kuranuma is now partly filled in by sediments so it has a crescent shape. Over the ridge another crater looks like a bog and still further away there are now trees growing on the floor of the bowl of an even older crater.