A close call for two foreign visitors on Mt Asama

What is it about Mt Asama? On a fine day in October 1903, while climbing the volcano's lower slopes, the two Englishmen had seen “a cyclopean pillar of writhing smoke and vapour pouring up into the vault of heaven”. This should have reinforced the warnings they'd already heard and dismissed. Yet still they pressed on – something drew them – until they stood on the very lip of the fuming crater. 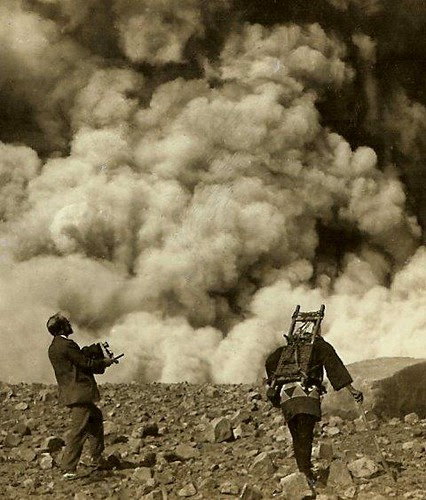 SHOOTING THE VOLCANO IN OLD JAPAN -- Photographer and Coolie Living Dangerously, a photo by Okinawa Soba on Flickr.
Or perhaps Asama's attractive powers weren't so mysterious. Herbert Ponting - the photographer who would later accompany Captain Scott on his last expedition - was in Japan to write a travel book and take pictures, the more spectacular the better. He'd already visited Aso-san in Kyushu, but that gigantic crater had proved disappointingly mild-mannered. So he had high hopes of Asama... Here Ponting takes up the story in his own words: 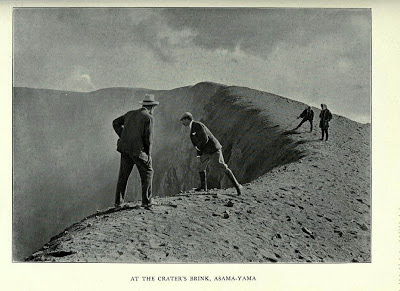 We saw an immense pit, six hundred feet or more across, and almost perfectly round, with perpendicular walls towering up from the bottom, five hundred feet or so below. These walls were burnt, and scorched, and stained with fire to every colour of the spectrum, and from a myriad cracks and crannies sulphurous jets of steam hissed out, each contributing its quota to the filmy vapours that rose out of the abyss from the fires of Tartarus below. Through the thin steam the entire crater floor was visible. It was a huge solfatara, with numerous holes from which molten matter was spurting, and red-hot lava pools which now and then were licked by little tongues of flame.

The noise of the place was truly infernal. There is no other sound on earth that can be likened to the sticky, sputtering buzz of a volcano. It is fearful to listen to — this vibrating, throbbing, pulsating din of ceaseless, steady boiling. The thing seemed to be fermenting with suppressed rage, and one half expected that any moment it would burst open and loose the furies it could scarce restrain …

Whilst absorbed in the contemplation of these beautiful surroundings, and the wondrous red and purple colouring of an ancient broken crater on the mountain's western side, the time sped swiftly on, and it was not until 3 o'clock that we prepared to leave. Our coolies went on ahead, but Hurley and I stopped a few moments for a last look at the crater, from which we found it hard to tear ourselves away. As we stood on the brink of the diabolical abyss there was a crash like a thunder-clap, and the earth seemed to split before us as the bed of the crater parted asunder and burst upwards, throwing thousands of tons of rock against the walls. For a moment or two the noise was like the din of battle. Masses of rock were hurled against the cliffs and shivered to fragments with reports like exploding shells, and showers of stones, whistling past us, shot many hundreds of feet into the air. 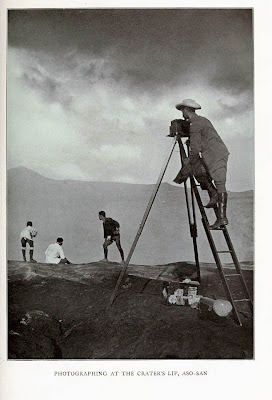 It all occurred so quickly that I cannot recall all my sensations, but remember thinking that my last moment had surely come. It seemed we must inevitably be struck by the falling stones. My first impulse was to seek safety in flight; but after running a few paces it occurred to me that the stones were just as likely to hit me running as standing still. Hurley had also started to run, but was evidently seized with the same conviction, for, without a word, he stopped too, and we both waited for our fate. Just then the smoke, which rose from the crater immediately after the explosion, swept in a great cloud above us, so that we could not see the flying stones, or form any idea where they were likely to fall. I shall not soon forget those moments, as we gazed upwards, with arms involuntarily held tightly over our heads for protection, waiting for the descending missiles to drop out of the smoke-cloud and annihilate us.

And then the stones came clattering down — sticking, with sharp thuds, deep into the ash. By good luck the main force of the explosion was directed slightly to the east, and on that side of the crater most of them fell. We were on the southern rim, and in our vicinity only a sprinkling dropped compared with the hail of rock that must have fallen a little farther off. 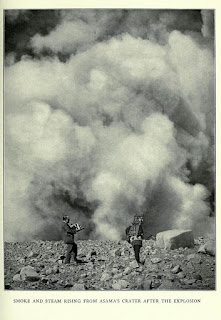 No sooner, however, were we safely delivered from Scylla than the perils of Charybdis were upon us. The smoke that was belching from the crater's mouth now enveloped us, and in a moment we were choking and almost asphyxiated with the sulphurous fumes. It was impossible to breathe, as, with hands tightly pressed over our mouths and nostrils, we blindly ran through the smoke for air. Fortune again was with us. In less than twenty paces we emerged suddenly from the chaos into brilliant sunlight, and staggered well out into safety before we fell upon the ground, gasping and filling our lungs to their fullest extent with great draughts of sweet pure air. It was a happy thing for us that the strong breeze which was now blowing was coming from the south ; thus the smoke was blown away from our side across the crater. Had it been blowing from the north we should have been unable to escape from the suffocating fumes.

This column of smoke was a thing of most awesome beauty, and held us fairly spell-bound. It belched up into the air in great, black rolls, which were emitted with such force and quantity that they were pushed far back into the teeth of the wind, and several times we had to retire still farther off as they bellied out towards us. It rose to the heavens in immense, writhing convolutions, and from the centre of the mass huge billows of snow-white steam puffed out, and bulged against the smoke, seeming to fight with it for mastery. But as white and black rose higher and higher in turn they mingled with each other, and soared up to the skies in a gradually diffusing pillar of grey which was tilted northwards by the wind and borne off rapidly into the clouds above.

Many thanks to Okinawa Soba for posting Ponting’s dramatic photo on flickr, whence it is linked here. And to Tom Bouquet, volcanologist and educator, for originally posting this photo on his own (alas, dormant) Japan volcano blog. I hope he won’t mind me duplicating his efforts.
Posted by Project Hyakumeizan at 8:18 PM

Excellent stuff. Super account and photo. Pontings asama photos plus his pre and post Cherry Gerrard, Bowers and Wilson "worst journey in the world" photos are some of my all time favourites.

Iain, good to hear from you. Intriguingly, Ponting gave slide shows about Japan to the assembled explorers of the Scott expedition during the long Antarctic winter. Could it be that he regaled them with the Asama adventure too....?

Wonderful post and pictures, thank you. Just look at the gents' clothing, complete with handkerchiefs in jacket pocket!

The "coolies" attire has hardly changed - some hut workers still wear jika-tabi and most use those back-straightening wooden carriers.

Well, that is a thing of beauty to read. What an utterly remarkable experience to have survived and taken home in memory. Were it guaranteed that I too would live to tell the tale, I would very gladly stare Asama in the mouth and wait for a subterranean belch of such dynamism.

Thanks for reading Peter - but, really, standing on the edge of live volcanoes isn't such a great ideas. Read Surviving Galeras by Stanley Williams for an account of the grisly stuff that can happen to you on an active crater rim....

Rather late for this stream of posts, I'm afraid, but to answer the question about Ponting and his lantern slide shows in Scott's hut, I'm sure he did regale them with the story as they were sitting not far from the foot of Mt Erebus. One of Ponting's companions, Tryggve Gran, who was also something of a mountaineer (set a new record for Mount Cook when passing through New Zealand) had a similar incident on near the top of Erebus. Ponting longed to climb Erebus but his photographic equipment was too heavy to haul up the slippery slopes.

Many thanks for your comment, Anne; it's never too late to comment! Your story about Tryggve Gran is most interesting: clearly Erebus too is not a volcano to be trifled with (I once met a volcanologist who was knocked out by the blast of an eruption there). As for Ponting's slide shows in Antarctica, they probably featured many black-and-white slides of young Japanese ladies in kimonos - that is, if the illustrations in his book "Lotus-land Japan" are anything to go by. Maybe a blast or two from Asama too...