The inner world of Mt Asama

Investigating the crater’s secrets with some help from the academicians

Our luck was out. We’d left Tokyo in the early hours, hiked over the old volcano’s wall and now, around noon, we stood atop Mt Asama’s curving summit ridge. Sulphurous steam roiled at our feet before heaving its way up into the sky; today, there would be no gazing, spellbound, into the nether world of the crater floor, corralled by its ring of scorched and blasted cliffs. 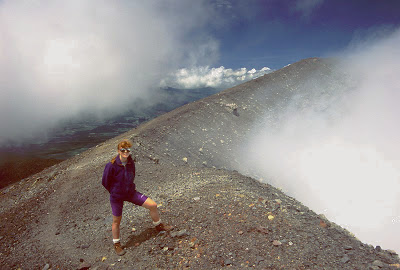 What is it about Mt Asama? As a climb, it has little merit. Yet that crater has pulling power. It was Asama that Kojima Usui, the founder of the Japanese Alpine Club, chose for his first excursion over 2,000 metres. That was in 1899. A few years later, the adventure photographer Herbert Ponting brought along a step-ladder so that he could peer just a mite further into the crater. And, as we have seen, he nearly paid for his temerity with his life.

Nor can the savants keep away. Scientific observations at Asama started in 1910, seven years after Ponting’s visit, “motivated by eruptions and a seismic swarm”. In fact, this was one of the earliest seismic observations made of an active volcano. Since our own visit in the mid-1990s, a quiet period, Asama has hotted up. In 2009, a light ash-fall drifted as far as Tokyo. A few months later, cameras on the crater rim caught the opening of a new vent in the crater floor. 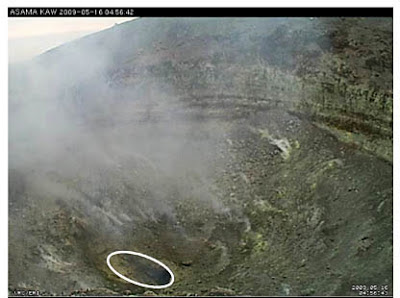 For the academicians, this activity has been an incitement. Starting with “only six seismometers” just before the turn of the century, they’ve festooned the mountain and surrounding areas with 30 seismometers, 15 GPS sites, 10 tiltmeters, nine microphones, and two cosmic muon detectors.

The kit has helped the geologists put together a clearer picture of Asama’s underworld. They can now tell you, at least tentatively, what you might find if you ventured down into the crater – that is, provided you could stand the noxious gases and the 200°C heat there – and if, like Professor Lidenbrock in Journey to the Centre of the Earth, you then decided to investigate that mysterious vent in the crater floor. 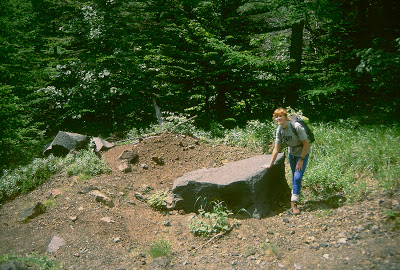 Jules Verne would certainly get a run for his money from this journey. Once you’d dug or drilled a way through the congealed lava that plugs the vent, you’d find yourself in a “conduit” about fifty metres across, twisting downwards into the darkness. You’d need a long abseil rope or ladder: the shaft drops more or less vertically for three kilometres – the height of the mountain plus a further kilometre into the depths of Japan’s basement rocks.

At last, the vertical shaft debouches into the ceiling of a vast chamber. If the view were not blocked by a sluggish volume of semi-molten rock, you’d see it opening out into a vast cavern – somewhat like one of those Cyclopean storm-sewers in Tokyo, yet hundreds of times larger, and rather higher than it is wide. 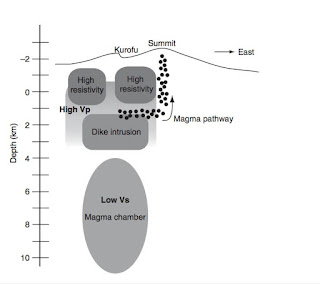 It takes you westwards and slightly north of Asama’s summit, out under the old Kurofu crater rim. Strange, you ponder: wherever the lava that feeds Asama’s eruptions comes from, it seems not to rise from directly beneath the mountain.

Five or so kilometres northwest of Asama’s summit, the rugged walls of the dyke start to close in. And there you start to sense far below you – another few kilometres down – a steady, intense reverberation of dull-red heat.

So this is where the lava comes from – a vast magma chamber, offset to Asama’s west, and doming out some four or five kilometres below sea level. From there, the molten slurries force their way up periodically into the dyke, and thence to the surface. Well, we’re not going down any further – it’s hot as hell here in the dyke, so you’ll have to imagine conditions in the magma chamber for yourself… 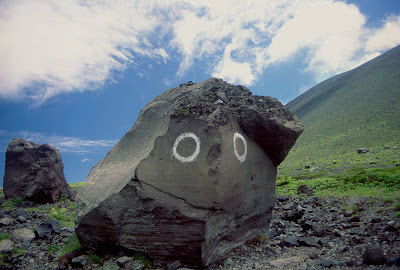 Up on the summit of Asama, at 2,568 metres above sea level, the summer breeze blew cool. Clouds had started to drift in too, mingling as they lofted over the rim with the steam from the crater. It was time to go. We found the path and followed its slant across the black-ribbed slope.

At the foot of the cinder cone, we met a troupe of Thai girls, in sandals and T-shirts, on their day off from some nearby bar or factory. We could hear their laughter for a long time, floating down from the summit, while we climbed the J-Band back towards the outer world. Perhaps they’d been rewarded with a better view.

Y Aoki, M Takeo, T Ohminato, Y Nagaoka and K Nishida: Magma pathway and its structural controls of Asama Volcano, Japan - image of vent and chart above from this paper.

And see Tsubakuro's blog for a more recent visit to Mt Asama - complete with a spectacular image of the new "live" vent.
Posted by Project Hyakumeizan at 9:19 PM

I finally made it to the crater rim in 2010. We saw the new vent and the N Alps stretched out across the horizon. It was as good as it gets.

Peter - interesting to learn that the vent was still visible when you visited.

Yes, I have a photo of the vent either on Flickr or one my tsubakuro blog where I posted about my hike. The mountain made a bit of noise just after we reached the summit and as my companion and I were the only two up there at the time we were both a little worried that Asama was not pleased with our intrusion.

That the conduit is not directly below the present crater makes sense if you view the illustrations in the photo I emailed to you from my Flickr photostream. Kurofu was active over a long period before it blew itself apart. No doubt the cataclysm blocked the original throat and a new vent opened up to one side of the plug where the magma could make a way.

Coincidentally, I only just read Journey to the Centre of the Earth earlier this year. How very similar the routes into the vents sound in your post and Verne's story. Too bad we become cooked and asphyxiated before even reaching the magma chamber in Asama.

Peter: many thanks for reminding me of the photos on your Tsubakuro sites. I shall head over there and take another look. As for conduits offset to one side of the active vent, there is a fascinating hint at the end of the referenced academic paper. The authors say this: "A magma chamber horizontally offset from the summit of a volcano could be a ubiquitous feature ... " and suggest that Kirishima's conduit is also offset - to the west - just like Asama. They don't speculate why this might be so .... Could it be that Japan itself is drifting relative to the magma sources ....

That speculation is a good one, PH. I wonder how many other non-hotspot volcanoes in the world have a crooked conduit. Could it be that mature volcanoes suffer from "vulture throat"? (A crooked neck). Or is it something that only volcanoes with a history of collapse have? Are crooked necks an indication of the direction of drift as you pointed out? Is anybody onto this?

I have a cottage down in karuizawa..was planning a hike up mt asama. How do you get info on the volcano gases? I'm willing to take my chances with the once a decade eruptions, but if you are standing at the rim of the crater full of sulferous gases, wouldn't you be toast if the wind changes direction?

Interesting what you said about the vents. I've read an analogy that the lava is like molten butter trying to get to the top of a pie, can burst out in a lot of unpredictable directions. Some of the minerals in the rock getting pushed under japan melt at lower temperatures, and try to work their way up to the surface.

Scott - thanks for reading. Bear in mind that the hike described in this post took place in the 1990s, when Asama was very quiet. So you need to take local advice before trying this hike now. As for gas, one of the hiking paths approaches from the western side, which is (usually) upwind of the sulphurous fumes from the crater. But keep clear of potholes and depressions in the low ground - that's where the gas will collect on a calm day.

Thanks for the advice...sounds risky! I'll follow current guideline to not get closer than maekake. good luck with your book!