Is all well with the representative tree of Japan’s alpine zone?

This just came in from Hakusan, the home mountain of the Hyakumeizan author. The photo below shows a creeping pine tree (haimatsu, Pinus pumila) affected by some kind of blight or rust that has turned the tips of its branches a reddish colour. 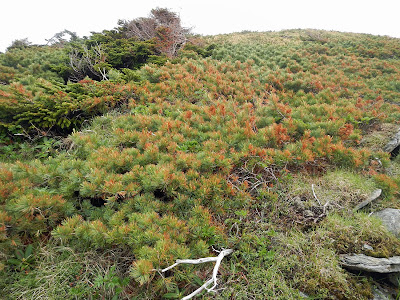 None of the experienced local mountaineers in the photographer's group could recall having seen creeping pines in this condition before, at least on this mountain. Several more haimatsu thickets in the area of San-no-mine, a subsidiary peak, were blighted in the same way.

Haimatsu is the representative tree of Japan’s mountaintops. “The scent of creeping pine” (Haimatsu no nioi) is the title of an essay on the joys of mountaineering by Kojima Usui, the founder of the Japan Alpine Club. On Hakusan, haimatsu thickets extend from the summit regions, at about 2,700 metres, down to about 2,000 metres, the tree’s lower limit, where this photo was taken.

According to a botanical garden’s website, the tree, when cultivated, “is susceptible to tip blight, rusts and rots. Pine needle scale can be a serious problem in some areas. Sawflies, moths and borers may appear.” That said, these afflictions shouldn't be much in evidence when haimatsu is growing in its natural habitat. Unless, perhaps, the habitat has changed. This year, Japan’s rainy season came late. Less rain fell than usual, while temperatures were much hotter than average.

On Tateyama last year, the haimatsu withered in the vicinity of Jigoku-dani when the valley’s fumaroles started to emit more sulphurous volcanic gases than usual (photo, right). But this was apparently a localised problem.

Volcanic gases are unlikely on long-dormant Hakusan. More plausible culprits for the blighted haimatsu could include industrial pollution (see Yellow sand, black snow), rapacious caterpillars or competition from other plants.

It may be that the Hakusan blight is also a localised problem. Or something more widespread may be going on. Has anybody else seen haimatsu thickets that are affected like this on other Japanese mountains? 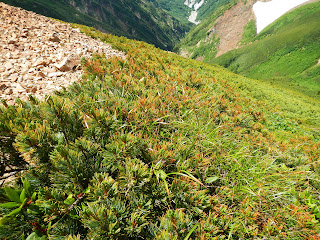 The same group of mountaineers who sent in the Hakusan photos went to the Karamatsu/Goryu area in the Northern Alps on the following weekend. These mountains are a good distance inland and further north than Hakusan.

And there (see photo right) they found more evidence of the haimatsu rust or blight. The "rusty" bushes were at a height of 2,300-2,500 metres and were mixed in with healthy bushes. So this is not an isolated problem. 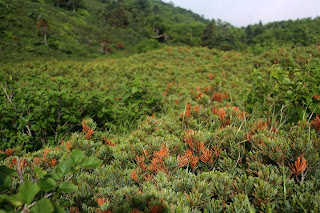 Hanameizan reports that most of the haimatsu bushes on Amida-dake (in the Yatsu-ga-take range) are tinged with rust (see picture right). Also, he adds, some other conifers and bushy plants appeared to be scorched.

Hanameizan is just back from a long hike from the Japan Sea Coast to Karamatsu: "From Nihon-kai to Karamatsu (Tsugami Shindo), the haimatsu tips were burned pretty much everywhere. Will be interesting to see whether the state worsens or improves next year," he reports (see picture below). 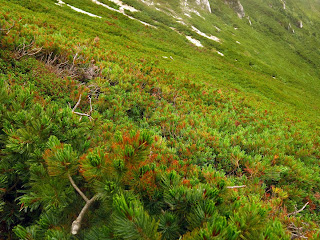 Posted by Project Hyakumeizan at 8:27 PM

I saw nothing like that on Sugoroku/Yari yesterday. The haimatsu looked healthy, with plenty of fresh shoots. The growlings of raichou adults and squawking chicks suggested they too were in good health.

Will keep an eye out for diseased haimatsu on upcoming trips.

Hanameizan: it's welcome news that the haimatsu and the raicho are in good shape on Sugoroku. But the news from Karamatsu/Goryu - just a bit further north - is not so good (see update posted above). An article in the Asahi says that airborne pollution is being concentrated in rime ice or snow on the mountains. See:-

Maybe this is affecting the haimatsu, although one shouldn't leap too hastily to conclusions ...

I had forgotten about your posting on yellow sand, black snow. Occasionally a dump of Chinese dust can be seen on cars etc., so it's highly possible (though I suspect the high pollution levels in Kawasaki mentioned in the article might just be of local origin!).

Anyway, checking the haimatsu will give me something to do while traipsing the ridges.

This summer the rainy season was announced in late May not mid-June. When it ended I never heard because rain persisted til the end of July. Yakushima however was suffering from a drought almost.

This was the summer of the 千年猛暑- the hottest summer in 1,000 years. We had many days in the high thirties and Shikoku's Kouchi set a new record for heat at 41 degrees. We also had tornadoes and ice cube sized hail stones this September.

I would not be surprised if the heat and unusual weather had something to do with the pines.