War came to Mt Fuji on July 30, 1945. For months, the meteorologists at the summit station had watched streams of enemy aircraft drone overhead. And so they saw nothing unusual about the six-ship formation that roared past just after 8am. Until two planes peeled off from the main swarm and came howling in towards them. Seconds later, the spent cartridges came spilling from the fighters’ wings and the air was filled with noise, shattering glass and flying splinters…

In retrospect, one might say that the road to war started in the previous decade, on another fine summer's day. It was on August 1, 1932 that Japan’s Central Meteorological Office commissioned its first officially funded observatory on Mt Fuji. Gathered round the small summit hut almost four kilometres above sea-level – yes, that’s Satō Junichi in the photo below, standing in the hut's doorway – the weathermen must have felt themselves as far above the era’s murky politics and foreign policy as “clouds from mud”.

Yet the events then unfolding in China would one day embroil these men too. Ten months earlier, the Japanese army had invaded Manchuria. In an act of insubordination that was swiftly termed “gekokujō” (下克上), the local army officers made their move without getting authorization from either the government or, indeed, their own general staff.

Whether or not the military had inspired them, the meteorologists were soon moved to stage an act of gekokujō for themselves. This was because the government had seen fit to approve just one year of continuous weather observations atop Mt Fuji, as part of Japan’s contribution to the Second International Polar Year in 1932-33.

As a single year’s weather readings would be scientifically of little worth, the government’s stinginess made no sense to the weathermen. So, in mid-December 1933, when the last approved summit crew were ordered to bring down the portable gear after they finished their month-long shift, they fell to plotting. How would it be, they mused, if they just sat out the winter in the summit hut, continuing their work in a kind of high-altitude sit-in strike.

The team leader – not to say ring leader – in this enterprise was Fujimura Ikuo, who later went on to head up the observatory in a meteorological career spanning three decades. At first, he and his crew cast about for some plausible-sounding pretexts for disobeying their orders – for instance, the slopes would be too icy to let them bring down delicate instruments, and so they’d have to stay on at the summit to look after the kit.

In the event, they made no such excuses. On arriving at the summit, they simply told the outgoing shift that they would stay until summer and keep up the observations. With that, Fujimura handed over a missive to the Meteorological Office’s directors and, together with his rebel crew, shut himself up for the winter. Fortunately, his resolve wasn’t put to the test. On New Year’s Eve, a telegram arrived from Fujimura’s superiors: “Observations temporarily extended; you are instructed to descend when relief crew arrives.”

The following September, the funding crisis was eased when a foundation set up by the Mitsui zaibatsu stumped up seven thousand yen. A year later, in October 1935, the government switched the summit station’s funding to the regular budget, so that it could continue operating indefinitely. To mark this promotion, the adjective “Provisional” was removed from the observatory’s designation.

The government also granted funds to build a new and improved hut close to Ken-ga-mine, Mt Fuji’s highest point – the buffeting airflow at the old site had interfered with pressure readings. There was even talk of a cable car to waft the relief crews effortlessly to the summit, although these plans came to nothing. But the new hut was duly opened in 1937 and one more building in 1940.

By 1944, Japan’s early successes in the war had become a liability. Lines of supply were overstretched. In fact, even keeping in touch with far-flung units of the Imperial forces had become problematic. Thus, the summit of Mt Fuji was the natural place for the military to look when seeking a better way to communicate with the radio relay station on Hachijō-jima, an island about 300 kilometres south of Tokyo. Better still, there was no need to build a new shed for the radio gear – they could house it in the meteorologists’ old hut at Yasu-no-kawara.

Furnishing a power supply was the biggest challenge. The plan was to sling a high-tension cable on poles between the city of Gotemba and the mountain’s 1,600-metre contour. After that, the cable would run underground all the way to the summit. The work of laying the cable was assigned to a squad of five hundred soldiers, who used ‘human wave’ tactics to complete the job in a blistering two weeks.

The new power supply brought more than one benefit – it put an end to the worst job at the summit station; cranking up the generator in winter. When the frigid temperatures had congealed the lubricating oil to candy-like stiffness, the duty man might be spitting blood by the time he got the motor started. Or, if the generator refused to start, the batteries would run flat, forcing the weathermen to cook by the light of candles. Once at least, the candles ran out too and rush-lights were rigged to burn the cooking oil, all this in temperatures of minus 30°C.

Soon the summit crews had more to worry about than scanty provisions and the icicles that formed in their sleeping quarters. Yajima Hiroshi had only just joined them on the mountain when he was called up for military service. On December 3, 1944, in a ferocious blizzard – the wind was gusting at a hundred kilometres an hour – Yajima set off with two colleagues to fight his way down to Gotemba. After that, he shipped out to Io-jima and was never seen again.

On March 13, 1945, one of the weathermen climbed the observation tower above the hut and, looking westwards in the direction of Nagoya, saw a reddish glow in the sky, beyond the shoulder of Akaishi-dake. Soon the spectacle would be repeated, and in almost all quadrants of the compass. Feelings of despair overcame the summit crews as, night after night, they watched these false dawns.

On July 18, five men from the army’s own meteorological service came up to the summit to launch weather balloons. Their brief was to check if the incendiary balloons then being launched by the military were flying high enough to ride the jet stream all the way to America. In fact, the balloons were already doing enough damage for the US authorities to impose a news blackout. One device even cut the power supply to the Hanford plutonium plant in Washington State.

By chance, it was at the end of the same month that the two enemy fighters made their strafing attack on the summit observatory. By a miracle, nobody was killed although some of the weathermen suffered bruises and scratches from ricocheting debris. And, although the 50-calibre bullets riddled the observation towers and smashed an instrument box, most of the precious equipment was unscathed.

In the end, Mt Fuji itself was a far more dangerous adversary than anything the Americans could launch at the meteorologists. The first casualty came in a snowstorm in April 1944, when 19 year-old Imamura Ichirō lost the way during a routine ascent as a member of the monthly relief crew. He stumbled blindly down the mountain before succumbing to exposure near the fourth-station level. The rescuers found him propped against a rock, as if he’d sat down to rest and never woken up.

The next mishap occurred in December 1946, when Koide Mutsurō slipped and fell from the ninth station. He was just 28. It is surely no coincidence that, of the four fatalities during the summit station’s six decades of operation, these two accidents closely bracketed the war’s end. As if climbing the mountain in winter was not already dangerous enough, the deck would have been stacked higher still against the weathermen by short rations, the blunted ice-axes and crampons, the lack of proper winter mountaineering kit.

Were these sacrifices worth it? This blogger cannot say what the Mt Fuji station might have added to the sum of meteorological knowledge. But by proving that men could survive and work in the extreme conditions of the summit, the summit crew did pave the way for a yet more ambitious project than year-round weather observations – the mountaintop radar that went into service in 1965 with the aim of saving thousands, or perhaps tens of thousands, of Japanese lives. This, though, is another story. 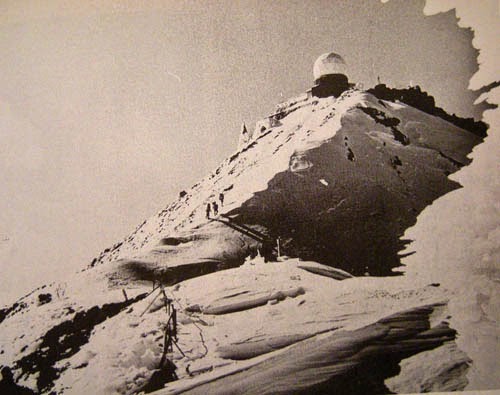 Timeline for Mt Fuji's modern history, from the project to re-utilise the summit station.
Posted by Project Hyakumeizan at 9:51 PM

Yet another interesting read with photos to boot. I particularly like the one of Fuji through the nose cone of the B-29. It conjures up so many thoughts for me. There are countless photos capturing Fuji's beauty and grandeur, this photo seems the complete opposite for me.

Thanks for reading, Iain. Yes, that photo of Mt Fuji at war has very sinister overtones. Since I put up this post, I have discovered another (Japanese) source that says there were actually three air attacks - or strafing runs - on the summit stations. On 3 December 1944, 30 July 1945 and 13 August 1945. Were they aiming for the radio masts, I wonder. And what has become of the records of these attacks on the US side - there must be logbooks, squadron records etc ...