People of the Lotus reprised

“Meiji 28 (1895): Nonaka Chiyoko (Matsushita Nao) is praying for the safe return of her husband, Itaru (Satō Ryuta), who is attempting the first-ever mid-winter climb to the summit of Mt Fuji. If he succeeds, he’s determined to build a hut on the mountaintop and shut himself up there all through the next winter taking high-altitude weather observations. But Chiyoko is afraid that, if he goes up there alone, he’ll never come back…”

If this plot-line sounds familiar, that may be because you read it here first, on this very blog. This time, though, the true story of how Chiyoko saved her husband from sacrificing himself to science is being retold by NHK, Japan’s national broadcaster. Entitled Fuyō no Hito, the new six-part “Saturday drama” started on July 26.

This is not the first time that NHK has revived the Nonaka story. In April 1982, a two-part drama was aired with the aptly named Fuji Mariko playing Chiyoko. An English-language guide to Japanese TV notes that the NHK Children’s Division adapted the story “presumably as a means of introducing young viewers to the science of weather”.

Actually, that last remark may need to be taken with a pinch of salt. It’s true that, ever since Itaru and Chiyoko were rescued from their mountaintop ordeal in late December, their story has periodically played to packed houses. In fact, a stage drama about them was put on at the Tokyo Ichimuraza theatre as soon as February 1896. But it probably didn’t dwell much on the science of the weather.

Just before that play opened, Chiyoko finished publishing her own account of the adventure in the Hōchi Shinbun. Again, meteorological details are scant in Fuyō Nikki (Journal of the Lotus), which, as the title suggests, is written in the style of a traditional travel diary. The lotus, by the way, is a nod to the traditional perception of Mt Fuji’s crater as a sacred mandala in the form of a gigantic lotus blossom.

In the autumn of the same year, the poet and author Ochiai Naobumi published a book-length account of the Nonaka story, Takane no yuki (High mountain snows), drawing heavily on Chiyoko’s diary. Then, a few years later, Itaru came out with his own guide to Mt Fuji (Fuji Annai). As you would expect, this account does make ample reference to the science of weather but, by that time, most people had lost interest.

After that, Mr and Mrs Nonaka were largely forgotten until 1948, when Hashimoto Eikichi published a novelistic rendition of their adventure. According to Andrew Bernstein, whose account I rely on here, the timing was not fortuitous: the novel was clearly meant to inspire people during the hard post-war years "by celebrating a Japanese man and woman who had endured the unendurable”. 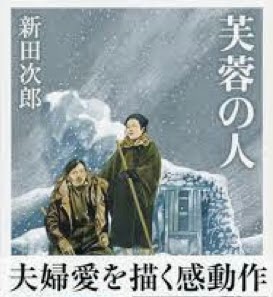 Be that as it may, the meteorologist and novelist Nitta Jirō thought that Hashimoto had underplayed Chiyoko’s role in the couple’s survival. And so, in 1971, he published his own novel, Fuyō no Hito (People of the Lotus), in which the story is told mainly from Chiyoko’s viewpoint.

It is Nitta’s version that has won out, providing both NHK dramas with their storylines and title. You can watch the second episode of the current NHK Fuyō no Hito this Saturday, August 2. (Sorry for failing to publish this post in time for you to catch the first.)

Judging from the trailer, the series will make the most of a human drama set amid a landscape of almost inhuman severity. But brace yourself for a disappointment if you expect to be introduced to the science of weather.

Posted by Project Hyakumeizan at 9:21 PM