October 24: The Sound Man is having trouble. And if the Sound Man is in trouble, then we all are. I mean, you can't do much of a TV interview without a Sound Man. 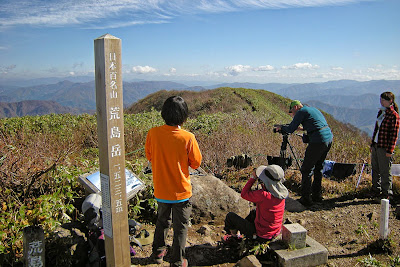 While waiting for him, we're having an extended lunch break - I'm tucking into one of the Sensei's industrial-strength onigiri - on the summit of Arashima-dake. Nowhere could be more fitting, the local office of NHK has decided, as a location for an interview about the forthcoming translation of Nihon Hyakumeizan. After all, this is the eighty-eighth of Fukada Kyūya's One Hundred Mountains of Japan.

There's no need for the enamelled panorama table nearby, as the Sensei knows every one of her local mountains and most of the far-off ones too - that's Ontake in the hazy distance, still steaming. Closer at hand, under the flawless autumn sky, the array of peaks is just as Fukada describes it in our favourite book:

From the summit, Hakusan dominated the view . In front of it were arrayed the lesser peaks of Hō-onji, Kyō-ga-dake, Aka-usagi-yama, and Gankyōji, the playground of the Fukui Mountaineering Club. The Buddhist names of many of these mountains are said to trace out the route that Taichō Daishi took when he made the first ascent of Hakusan. 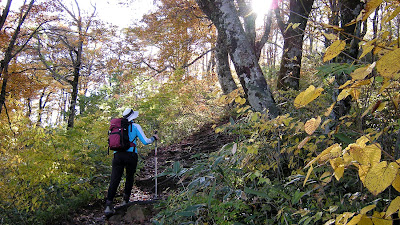 The Sensei is particularly proud of Kyō-ga-dake - it's a former volcano, she says, and you can clearly see the crater. I turn in that direction, but the mountain looks a bit broken down, if you ask me. But I never disagree with the Sensei, especially about local mountains.

That reminds me: we're up here for an interview, but we're still missing the Sound Man. Over there, by the trig point, Yahara-san, the NHK cameraman, is setting up a heavy-duty video camera. And Miura-san, the director, is looking at her list of questions. Both know their way about mountains - Yahara-san is as likely to be found filming in the Himalaya as he is in his native mountains of Fukui, while Miura-san hails from serrated Shinshū. But the Sound Man, summoned at the last moment from NHK's office in the flatlands of Nagoya, is still missing. 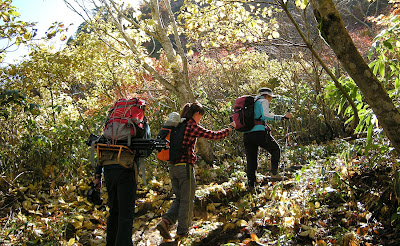 Eventually, he struggles to the summit, larding the ground with sweat, his face perilously grey with the effort of porting a full-size boom mike and a ponderous box of recording gear up a 1,524-metre hill. This might be the first mountain he has ever climbed. Lesser men would have given up long ago. I feel a pang of guilt: surely, we should have given him more help.

But the show must go on. In minutes, the video and sound gear is deployed, and Miura-san asks the first question. "How did you come to translate Hyakumeizan?". I'm inclined to reply "In a fit of reckless insouciance," but realise that my rusting Japanese skills won't stretch to that. So I just say that, after moving to Europe, there was more time to read the book and I soon realised that it deserved every bit of its classic status. And that's true too. 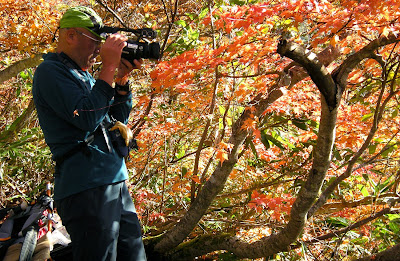 Thanks to our late arrival, the sun is now blazing down and I've had to take off hat and sunglasses to face the camera. Even in October, the light is intense at this latitude. I ask Yahara-san if I can put on some sun protection - better not, he says, as it would look crummy on video. OK, all art demands sacrifice.

Next question - which do you prefer, the European or the Japanese Alps? Each in its special way, I reply, or words to that effect. So what's special about the Japanese mountains, Yahara-san follows up. Shinrin desu ne, I say - it's the woods, isn't it. After all, that’s what Walter Weston said, though more eloquently: "the magnificence of the dark and silent forests that clothe their massive flanks." 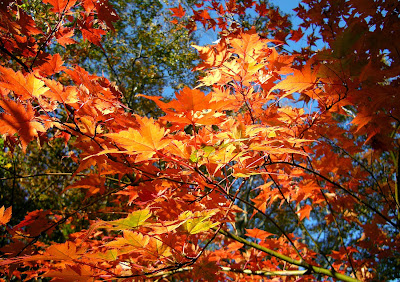 We move over to the summit shrine. The sensei bows and folds her hands; I just stand there, respectfully, of course. "What do you think of when you see a shrine like this?" asks Yahara-san. Well, surely all 'famous mountains' should have a summit shrine. As the Hyakumeizan author observed about another mountain, "The Japanese will never cease from putting shrines on their favorite mountains." 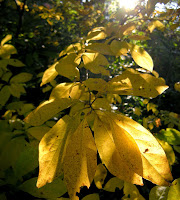 Arashima-dake has had a shrine for a long time. Fukada noted it when he came this way in the 1950s or 1960s:

I noticed that the summit shrine contains several figures of Jizō, one of them sculpted in the first year of the Genji era (1864). Yes, I nodded to myself, this mountain has been revered and people have come up here to pay their respects for centuries.

Interestingly, the shrine on Arashima-dake was taken down in a summit clean-up that took place a few years ago. For a while, the mountaintop was bare. But the local people clearly thought the shrine should be replaced.

Come to think about it, it's not so different in Europe. Around the start of the twentieth century, the Swiss and Italian villages of Zermatt and Valtournanche decided that their local mountaintop should be consecrated. After the Italians had fabricated a tall summit cross from wrought iron, no doubt at considerable expense, teams of mountain guides took two summer seasons to haul it up the mountain. And there you can see it to this day, on the Matterhorn's summit, with the Latin names for each village worked into the crossbar: Patrumbor and Vallistornench… 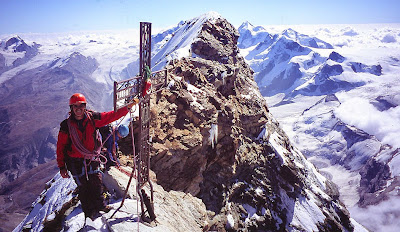 Alas, there isn't time to develop this theme in a news clip that's destined to last no more than a few minutes. So I just say that a mountaintop without a shrine (or cross) would seem - the word eludes me. "Mono-tarinai", suggests the sensei. Yes, that's it exactly – something would be missing. 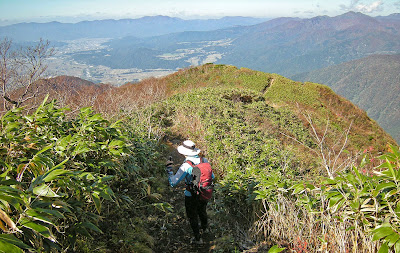 It's time to go down. A sharp-edged section of ridge leads away from the summit. A few summers ago, somebody fell off there, observes Yahara-san. The body was only found when somebody remarked the stench rising from the gully below. We head carefully down the slippery path, between ramparts of panda grass, towards the dark and silent forests below.

Or not so dark. Slanting in under the trees, the afternoon sun backlights the leaves in spangles of red, yellow and gold. Yahara-san darts to and fro with his video camera, capturing seasonal footage. We have plenty of time to appreciate the autumn colours as the Sound Man is coming down almost as slowly as he went up - a sprained foot is now adding to his woes. But he still insists on carrying his own pack. 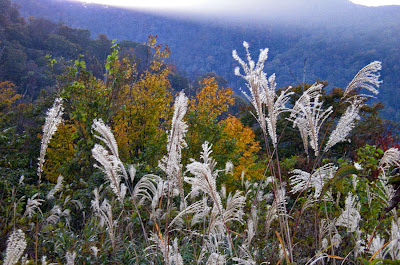 We wait for him again above the abandoned ski-piste. The sun has gone behind the ridge by now, and the pampas grass glows palely in the gathering dusk. Eventually, the Sound Man limps into view and I realise that, all day, it’s been our colleague from the flatlands who’s been cultivating the true mountaineering spirit. This time, the right words spring unprompted to mind. They are gaman and konjo. By the time we get to the cars, the light really is going.

Posted by Project Hyakumeizan at 7:46 PM

Wow, sounds like you had your work cut out for you at that interview. I can imagine how nerve-racking it must have been to answer those questions in front of a camera. At least when Yama-to-keikoku interviewed me there was a writer who skillfully crafted my broken Japanese into something workable, but I guess you had the Sensei helping you out when you could.

I'd love to see a video of the segment if someone happened to record it.