Travelogue continued: getting to know Hakusan again after a long gap 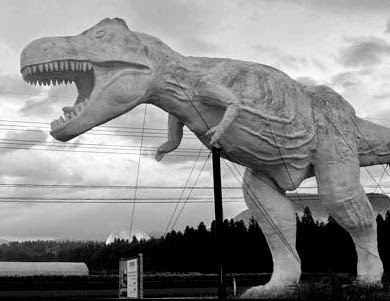 The life-size tyrannosaurus did discombobulate me - not that I took it for real, of course, though it seemed to lunge at us out of the twilight. As the Sensei had already explained – she was driving – the hulking beast was made of nothing more terrifying than papier-mâché. And it stands guard over a new dinosaur museum. But that was exactly what worried me: the creature was new.

As a rule, mountaineers aren’t fond of change – we like our mountains the way they always have been. This morning, though, innovations leapt out at every bend in the road. That’s only to be expected when you revisit a favourite mountain for the first time in decades. When we reached the end of the forest road, the Sensei parked her van in a multi-level car park; in the old days, this was just a patch of gravel.

Shrouded in mist, our mountain looked suitably mysterious. Hakusan is one of Japan’s three most sacred summits, along with Mt Fuji and Tateyama. It was the home mountain of the author who wrote up the Nihon Hyakumeizan, and the first high one that he climbed. "I could write for ever about Hakusan," Fukada Kyūya wrote, "so much has the mountain given me."

Unfortunately, the instant success of Fukada's book greatly increased the popularity of the mountains he described. That is all the more ironic in the light of the acerbic comments about new roads, ski resorts and summit installations that he sprinkles through his mountain essays. For Fukada was an arch-conservative. In the afterword to Nihon Hyakumeizan, he has this to say about “famous mountains” that let themselves be Disneyfied:

A peak that people admire from morning to night, that they crown with a shrine, necessarily qualifies as an "eminent mountain". A true spirit of reverence inheres in such places. Unfortunately, the crowds mobilized by mass tourism have debased some of these mountains, hallowed by tradition though they once were, and driven the mountain gods from their haunts. Such mountains are no longer eligible as Meizan. 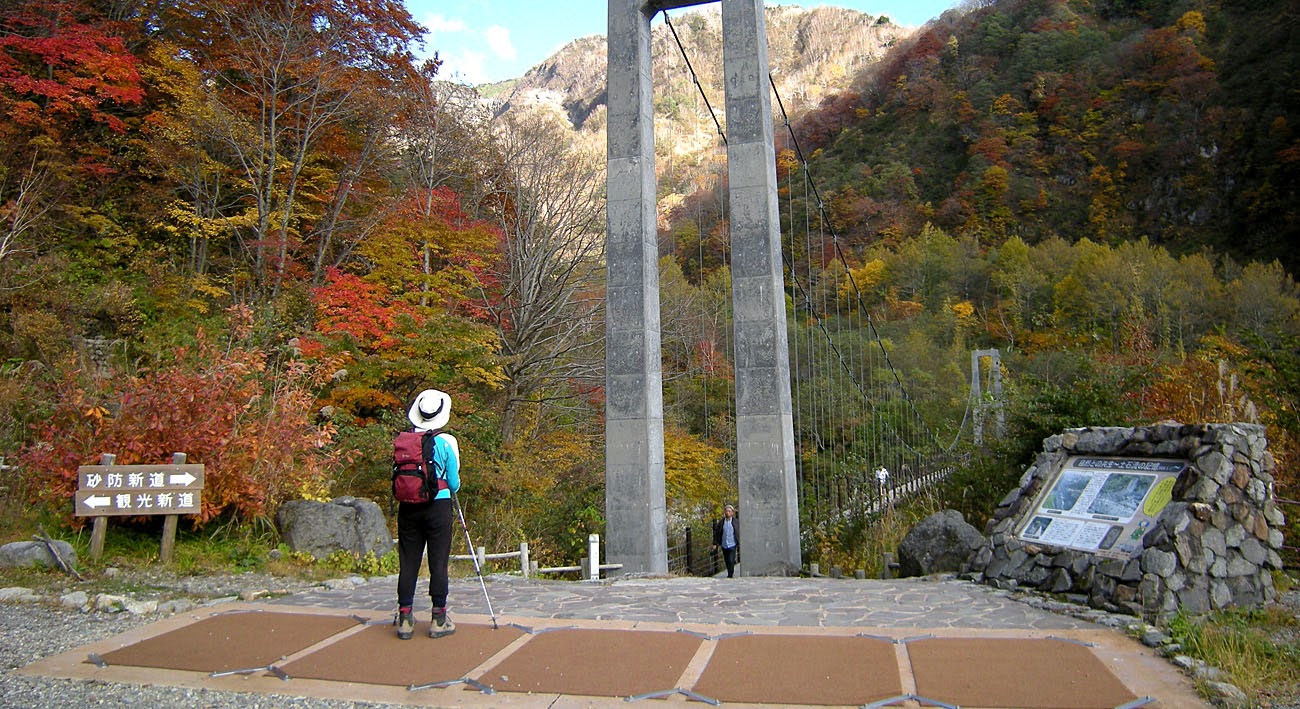 Could Hakusan too be in danger of losing its Meizan brevet? As we shrugged on our packs in front of a grandiose visitor pavilion, I was starting to worry. The spirit of reverence seemed to be much in abeyance around here. True, the climbing path leads out under a concrete torii, but this structure serves mainly to funnel visitors over giant doormats. These are supposed to wipe the seeds of alien weeds from hikers’ boots, said the Sensei. A little later, she pointed out such an intruder, sprouting by the path. 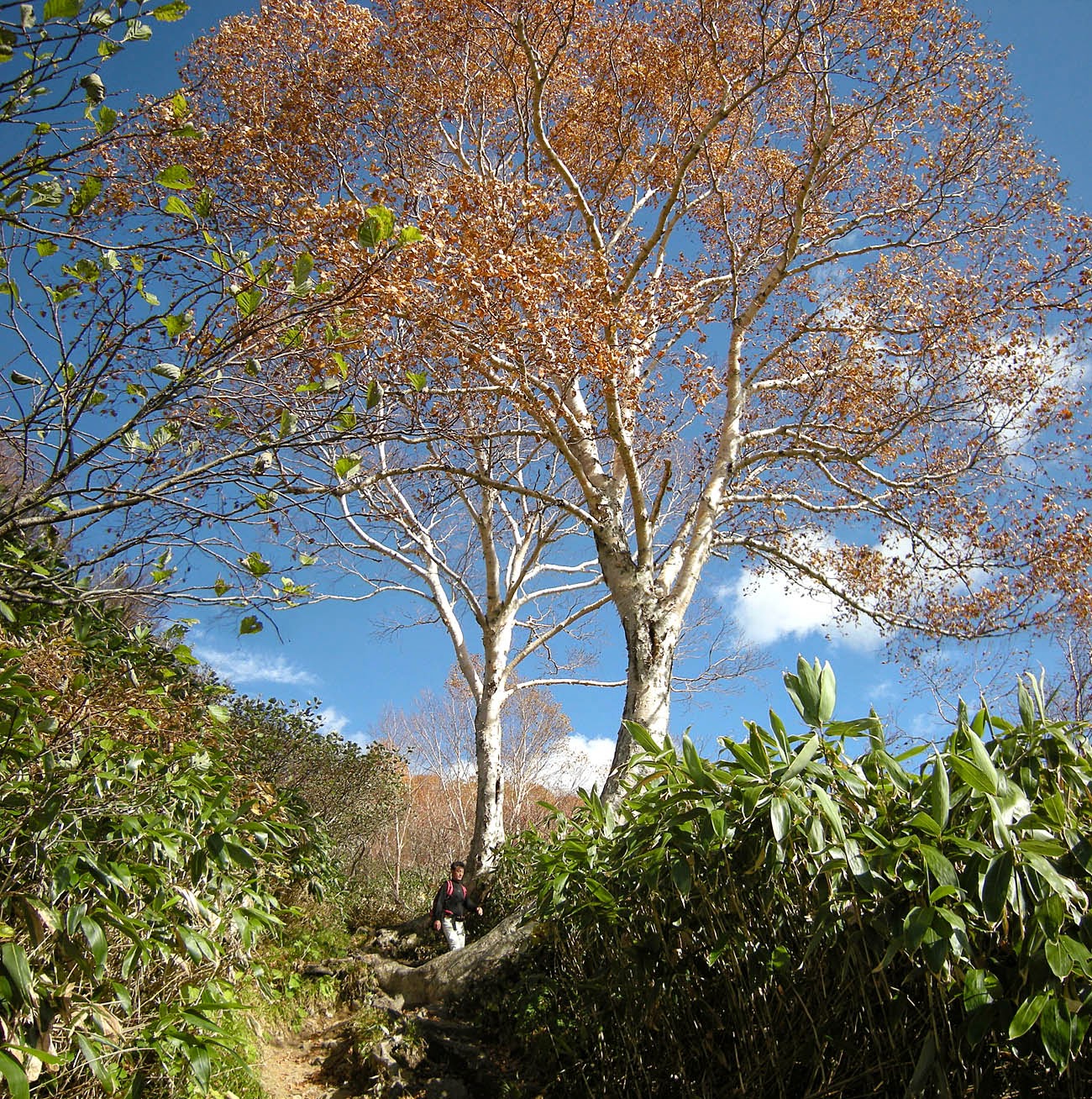 Cloud kept our valley in shadow, though fitful shafts of light played on distant hills. Soon we stopped to take off our jackets: in the old days, frost pillars would push out of the ground in this season, and snow would already have dusted the summits. Today was more late summer than early winter. No wonder those alien plants are moving uphill.

Coming up to a pair of mountain birches that mark the start of Hakusan’s sub-alpine zone, the Sensei patted the silvery bark and announced them as old friends. A while later we reached the midway hut at Jin-no-suke. Or rather we reached the large blockhouse that replaced the small wooden hut which used to merge unobtrusively into the hill. We took our half-way break on the new concrete terrace, where once there was a forest glade. 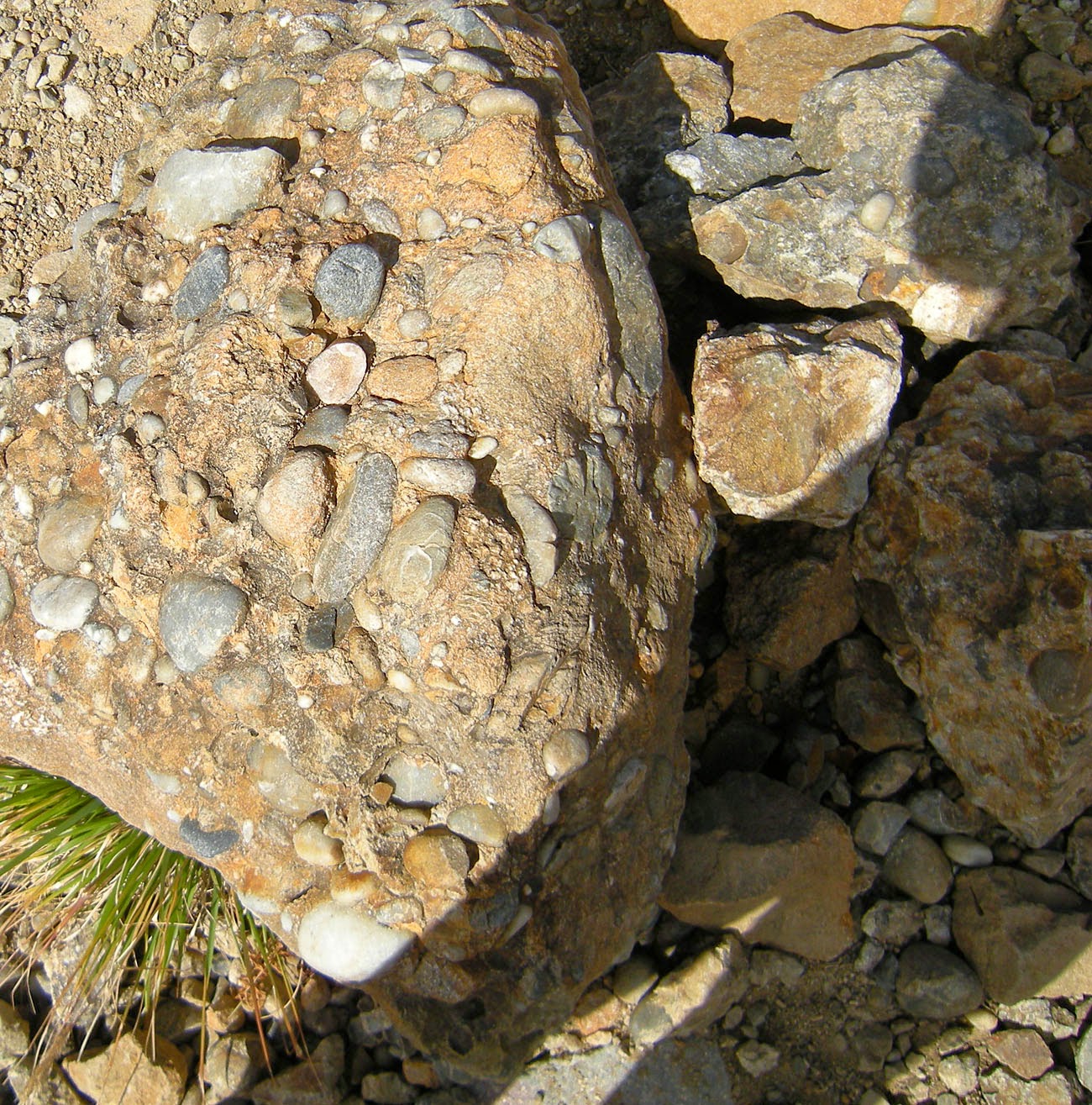 Above the hut, we came to an outcrop of conglomerate rock, rounded pebbles frozen into a concrete-like matrix. Not the kind of rock you’d expect half way up a not-yet-extinct volcano; you could almost see the gravels rolling along the bed of some ancient river, washed down from a vanished mountain range.

It turns out that we were looking at the Tetori Group, the very formation that, lower down the mountain, yielded up the dinosaur bones for the new museum. The Sensei, who indulges my interest in rocks as a harmless eccentricity, walked on ahead while I took a photo. Some novelties do have to be accommodated, even if they go back more than a hundred million years. 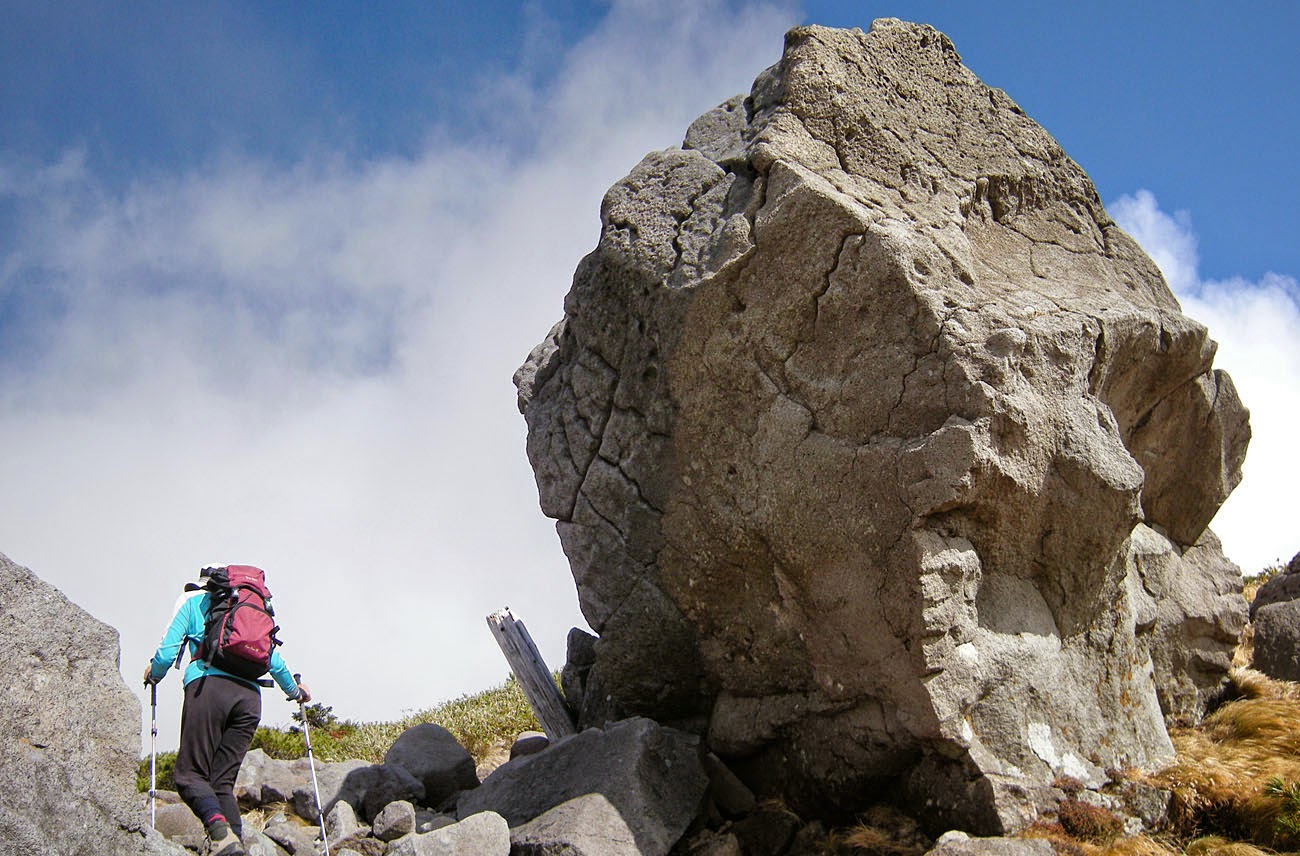 Climbing back into the realm of lava, we passed a giant boulder that must have surfed downhill in one of Hakusan’s eruptions. Now the view opened up across a plain of rustling panda grass. This was Midagahara, the Buddhist name signalling a kind of gateway to the upper world. Years ago, we’d met the monks of Eiheiji here, black-robed and straw-sandalled, each carrying down a creel full of empty drink cans. No sign of them today.

At around 2,200 metres, panda grass gave way to an avenue of creeping pines. The gnarled branches looked to be in good health, green and glossy, with no trace of the strange blight that was reported last year.

We came up to Murodo. For a century or more a large hut has dominated this belvedere below Hakusan’s summit cone. Now a cluster of buildings sprawls across the plateau, big enough for 700 guests at once. This late in the season, all were shuttered. A few hikers were brewing up on gas stoves on the concrete ledges under the eaves. Most wore down jackets against the autumnal chill. 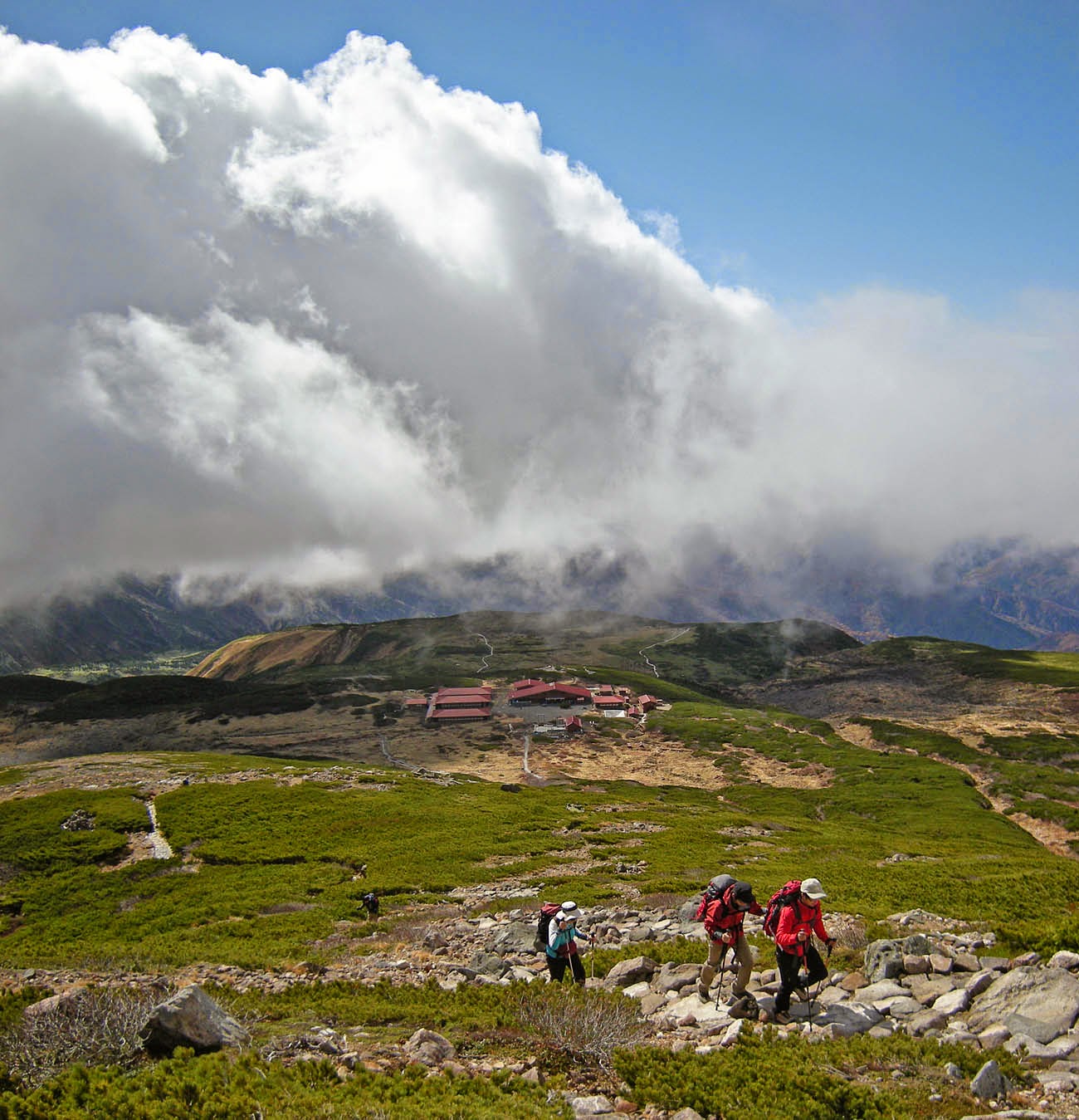 We'd left Murodo below when the clouds were rifted away, like a prestidigitator's tablecloth, to reveal a wild hassle of sunlit hilltops tumbling away in the distance. From out to sea, the clear autumn light cascaded over our mountaintop. Was it in search of visions like this that old Monk Taichō pioneered the way up here in the first year of Yōrō, almost a millennium and a third ago?

At the summit, the wind from the sea blustered against a stone revetment. Behind it sheltered the “okumiya”, the innermost sanctuary of the Hakusan shrine. Brightly dressed folk paid their respects in front of the weathered timbers. Others, at the trig point a few yards away, took selfies. We stepped up to the highest point and looked down at the little crater lake, faithfully reflecting the sky as it always has done.

The Sensei led the way – this is her native mountain too – to a sheltered spot below some boulders, and unpacked three of her industrial-strength onigiri. Our lunchspot faced inland, towards the Japan Alps. Ranges of lower hills rolled away at our feet, as if paying homage to our peak. Hakusan is a high mountain. 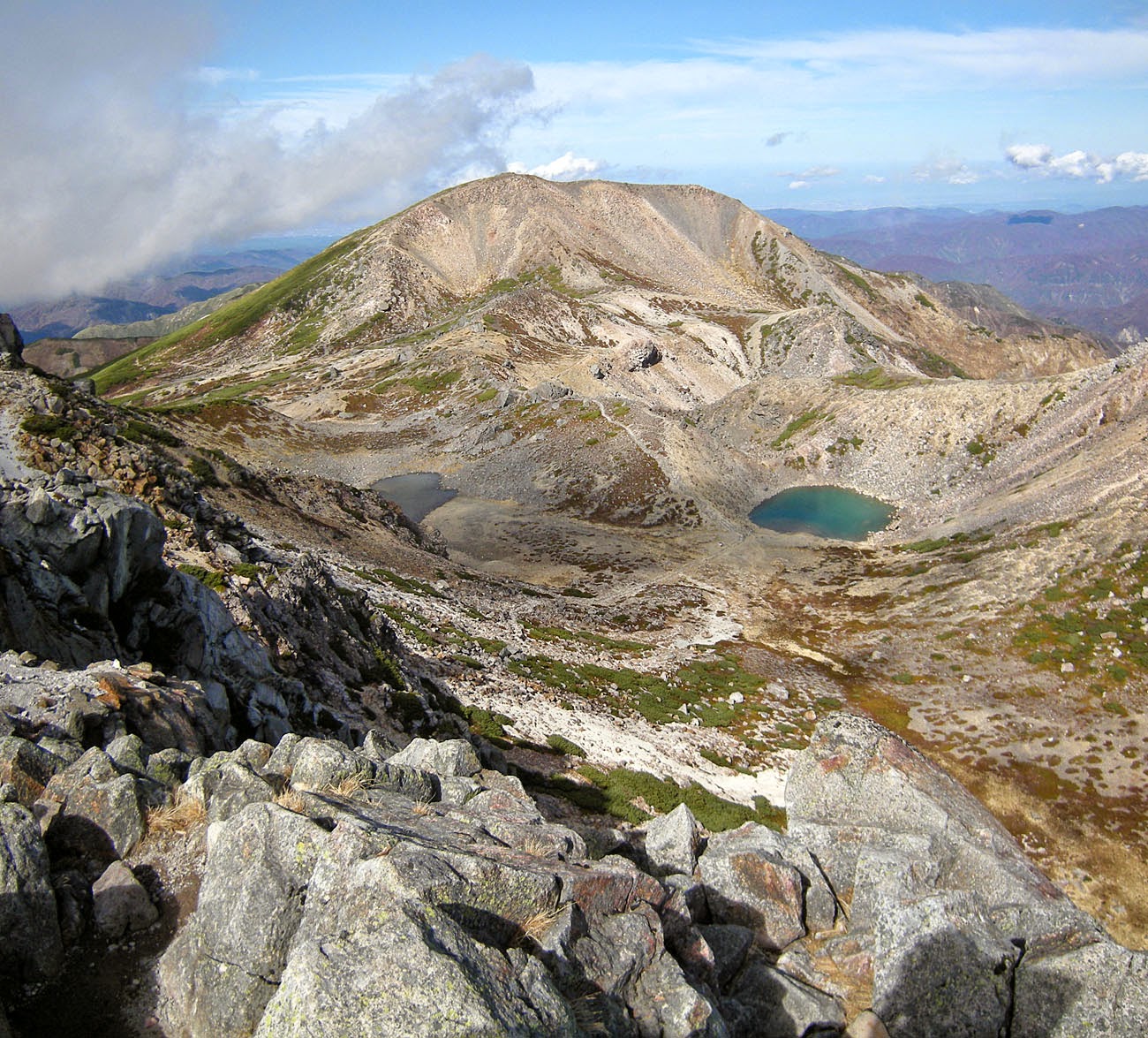 Some might cavil at that assertion. After all, Hakusan tops out more than a kilometre below Mt Everest's base camp. Or, to put it another way, you'd have to jack Hakusan up by the best part of two kilometres before it could face off against the Matterhorn. Yet Hakusan never fails to impress me as a mountain of stature.

Tucking into one of those industrial-strength onigiri, I wondered how this could be so. Something to do with the expansive views of an “island peak”, perhaps. Or the way that the summit cone stands aloof from the sublunary world of trees and grass. Or the frost-sculpted landscape of the craters below – the stepped slopes and snow hollows must be some of the southernmost periglacial features on this side of Honshū.

The Sensei interrupted my thoughts. “Just below us is the cave where Monk Taichō meditated,” she said. “With my mountaineering club, we visited it once – it took a while to find, searching around on those steep slopes.”

Naruhodo, I realised, however often you visit a “famous mountain”, there’ll always be something new to discover. It’s almost like a continuing conversation, one with a person of depth and character. I looked over at the Sensei at this, wondering if I should run the idea by her, but she was busy with her own onigiri. As for Hakusan, you know, one could do a lot worse for a Meizan-in-law…

Posted by Project Hyakumeizan at 7:07 PM