Nobody can say what kind of book Nihon Hyakumeizan is, but please don't let that stop you from enjoying the translation 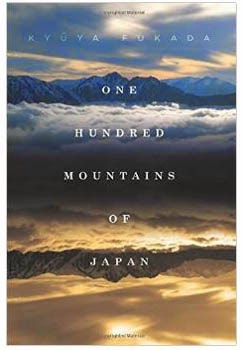 Ah, the oxygen of publicity. Thanks to an article in the Asahi Shimbun, pre-orders on Amazon's Japanese site have temporarily lofted One Hundred Mountains of Japan into best-seller territory. For two weeks or so, the book duked it out among the top 100 foreign titles. It even nipped briefly (so to speak) at the heels of Fifty Shades of Grey.

A funny thing happened during this heady period. For a while, the book held the top slots for any Amazon Japan-listed foreign book in three widely differing categories - travel, ecology and science. "Travel" seems logical enough - I mean, you do have to cover quite a swathe of territory if you plan to climb all of Fukada Kyūya's favourite mountains.

But science and ecology? In all fairness, prospective readers with a technical bent should be warned of possible disappointment. Given that mountains are piles of rock and dirt, it's amazing how little space Fukada gives to geological ruminations. You will usually look in vain if you want to find out what a mountain is made of. Although, as noted before on this blog, the Hyakumeizan author did know his flowers.

This embarrassment of categories calls to mind a conversation that Project Hyakumeizan once had with the commissioning editor of an eminent publishing house. This took place soon after the translation was completed, a few years back. Unfortunately, said the editor, he couldn't take on the book - it wouldn't sell because it didn't fit into any recognizable genre.

Actually, he had a point. One Hundred Mountains is devilishly hard to categorise. Not unlike the geological mélange of Kita-dake, that mountain for philosophers, it blends together bits of this and bobs of that - a soupçon of travelogue here, fragments of literature and history there, all mixed up, but with masterly assurance, into a zany matrix of zuihitsu-style essay writing.

This categorical confusion is nothing new, by the way. When the original Nihon Hyakumeizan first came out, in 1964, it promptly won the Yomiuri Prize for Literature - in the category for biography and criticism. Biography? Criticism? Fukada's former climbing companion, Kobayashi Hideo, who was on the panel of judges, explained his advocacy as follows:

This is one of the most original works of criticism that I've seen in recent years. The objects of critical thought are, in this case, mountains. The author has chosen to write about mountains as if they were people. To do so, he has engaged with them face-to-face, so to speak, in all the remotest corners of our land.

Regrettably, Amazon doesn't rank the Hyakumeizan translation in either biography or criticism. But, as of Monday this week, the internet giant is performing a much more vital service - it is starting to ship the book, at least from its Amazon.com mother ship. Shipments from Amazon Japan will also start soon, I'm assured. So you can now buy one copy of the English-language Hyakumeizan, a mountain book, and get several extra literary genres packaged with it, at no additional charge.

Just don't expect me to tell you which they are, though.
Posted by Project Hyakumeizan at 6:55 PM

Might one suggest you make it slighty easier for your dedicated following to buy a copy by publishing a link? I had to search for it on Amazon, manually!!!! Oh, the suffering, the hardship!

But, well, congratulations. And farewell anonyminity...

It seems the first print run has already sold out, but it was still easy to order on Amazon for the next run.

It's not hard to wait a little longer after all these years!

It's even on Amazon Canada. Well done.