"Characteristics of the Japanese mountain landscape" (4)

Continued: a disquisition on the aesthetics of volcanoes and alpine landscapes by Kojima Usui, founder of the Japanese Alpine Club

Once on the heathland of Oiwake, I came upon a young student making a sketch of Mt Asama, the volcano quiescent, as if slumbering in its robes of tawny velvet. Just at that instant, the mountain woke to life with a thunderous explosion, throwing up, one after another, great hydrangea heads of scabrous, sulphurous smoke, into a column that reached up from the crater to the clouds. 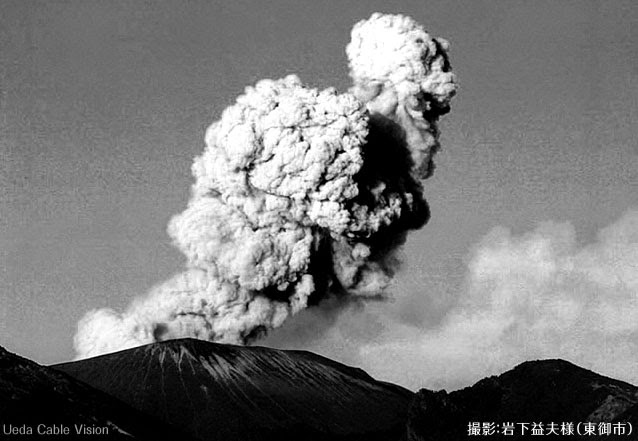 In an instant, the mountain took on a sombre, apoplectic tone and the student, seeming to despair of capturing such a sudden change, gave up on his sketch and glancing in my direction, exchanged an uneasy smile with me. Such dramatic scene-changing might be all very well in the play of light falling from a fairweather sky, but how on earth could something as solid, so resolutely un-plastic, as Mt Asama undergo such an instantaneous transformation.

This sense of an emotional outburst, or outright rage, really can be evinced by volcanoes I believe, solid and inorganic as they may be. In the same way that you see the blue veins stand out under a person’s sensitive skin, or see his face suddenly change colour, volcanoes too are seething with skins of soft sand, or ash or tilth that form clean-cut lines and shapes when eroded by the flow of water or etched by sliding snow.

Looking at the hundreds of gullies on Mt Fuji – take Dainichi-sawa or Sakura-zawa, for instance – and you see that all are formed by the erosive force of water or snow, and when you start out climbing the mountain by the Gotemba route, you’ll see two hillocks of rubble projecting about a hundred feet above the ashy slopes of Hoeizan, stretching their skirts southwards.

This is Ni-tsu-zuka, the twin volcanoes or side vents (or, as the savants say, parasite cones, although I question whether it is fitting to call them so when they are part and parcel of the parent volcano rather than something alien, as in the plant world, that battens on a host plant of a different species) on whose black sands the wind whistling down from the mountain scours its tracks.

All volcanoes are characterized by a magnificent simplicity, but if you look at them closely, you can see the traces left by the wind and, although this phenomenon is by no means confined to volcanoes, it is on the soft, easily scoured flanks of volcanoes that such traces are most clearly etched.