Story of a review

It seems scarcely possible that the same person who commissioned the original Nihon Hyakumeizan in the late 1950s could, more than half a century later, be the first to review One Hundred Mountains of Japan, the book’s English version. Yet exactly this has just happened. 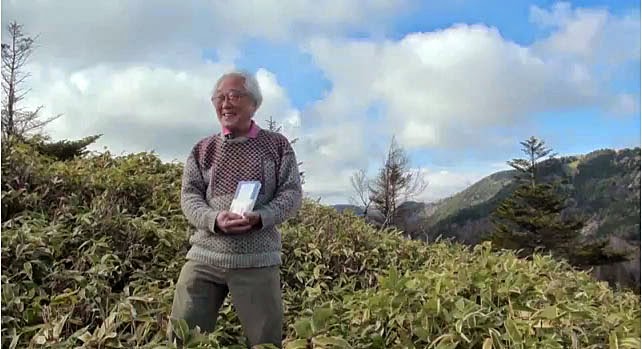 The generous and perceptive review of the translated Nihon Hyakumeizan that you read in the previous post is by Ohmori Hisao (above), one of the Japanese Alpine Club’s senior statesmen. The original Japanese version of the review appeared in a recent JAC newsletter.

An authority on the European Alps, Ohmori-sensei has a long list of mountain and travel books to his name. He also introduced the latest edition of Fuji Annai and Fuyō Nikki, the journals by Nonaka Itaru and Chiyoko of their 82-day sojourn atop Mt Fuji in the winter of 1895.

In the late 1950s, Ohmori-sensei was working for a small publisher in Tokyo, Hōbundō, having recently studied French at university. It was probably thanks to this background that he got to know Fukada Kyūya, the future Hyakumeizan author, who was then translating a French mountaineering work for Hōbundō.

Here Ohmori-sensei himself takes up the story:

As Hōbundō was a small company, I had to do everything by myself. While editing books, I also had to help edit magazines. Thanks to this, I acquired the necessary skills on the job. One day, the editor of the monthly magazine Yama to Kōgen (Mountains and Highlands) retired, and I was asked to take on this work.

Just then, I came across Mr Fukada’s essay on “Uncrowded Meizan – in pursuit of repose and solitude,” which he’d written for a special issue of Bungei Shunjū. It was in this article that he first floated the idea of ‘a hundred famous mountains of Japan’. “That’s it!” I thought to myself – this would definitely make an excellent project.

You see, I wanted to make something more of this magazine than just something for outdoor or mountaineering club members. And the literary prowess and the mountain experience that Mr Fukada brought to the table was exactly what I had in mind. So I called on him at his home in Setagaya, did some negotiation with him, and got his agreement to write.

The rest is history. What later became the definitive One Hundred Mountains of Japan started life in the March 1959 edition of Yama to Kōgen. Chōkai and Nantai were the first essays to appear. Readers subsequently voted this the best feature in the magazine, which published two of Fukada’s mountains every month until April 1963. The articles were collected and published by Shinchōsha in July 1964 in an edition that you can still buy today.

That is remarkable and very fitting. And an honour bestowed upon your work, Martin.