Although Karamatsu-dake is not one of the original One Hundred Mountains of Japan, it does feature in the “New Hyakumeizan” listing that favours easier-to-reach mountains for Japan’s silver generation. This distinction it owes to the Happo ski resort’s lifts that waft you straight to 1,800 metres from the valley floor. The summit looks out towards rugged Tsurugi, one of the most alpine views in all Japan. And the long straggling ridge holds its snow into April, making it the ideal venue for a combined snow holing and mountain photography weekend. 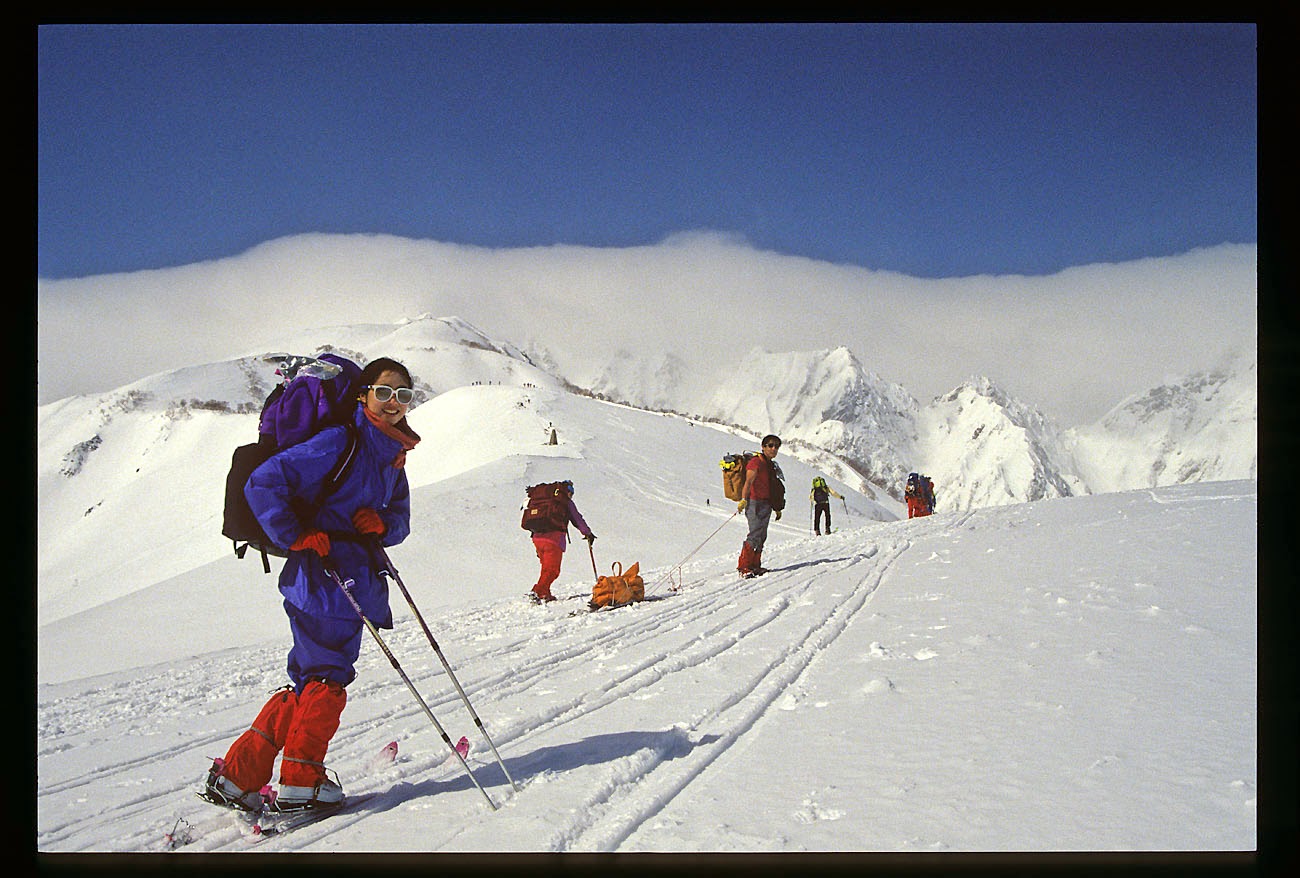 I’m not sure why Matsuo-san had decided to instruct us in the art of digging in. It could be that his fatherly instincts were prompted by an incident on Yatsugadake where two Workmen Alpinists were benighted while working down a steep gully. They'd saved themselves from freezing by excavating a shelter in a snow wall with their ice-axes and a teaspoon. 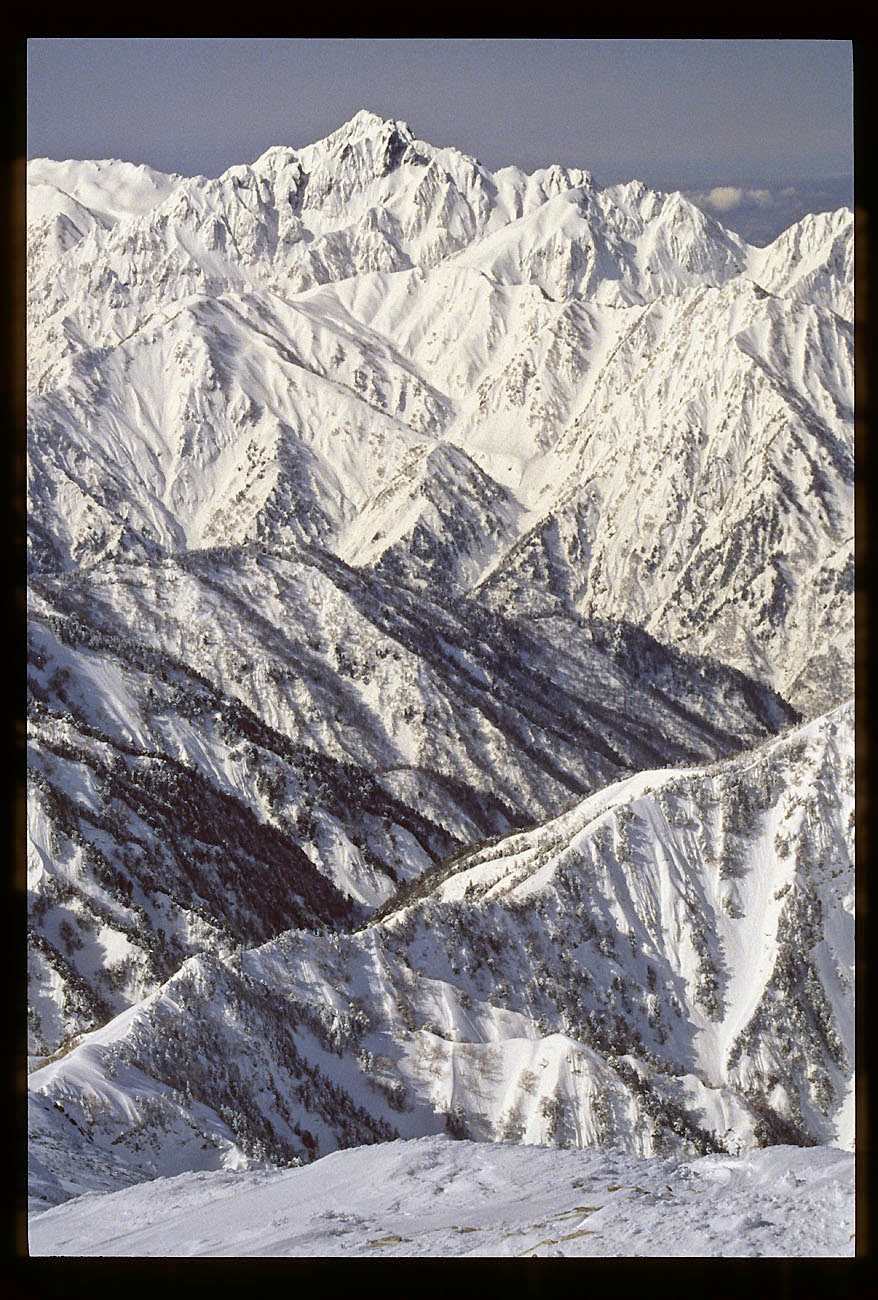 Be that as it may, nobody could be better qualified to teach snow holing. Matsuo-san is a true Setsudo Hakase, a doctor of mid-winter bivouacs. In his younger days, he had overnighted in deeply cryogenic places like the summit of Kashimayari, there to await and record the year’s first sunrise.

Here was why we needed those lifts. To combine his twin passions of snowholing and photography, Matsuo-san had brought along so much gear that he had to turn his skis into a makeshift sledge. So we set out looking more like a trans-Antarctic survey than a party of weekend ski-tourists. A damask fold of cloud curled over the nearby summits as we started out, adding to the expeditionary feeling.

There was no need to go far. Picking a likely looking snowbank on the lee, southward side of the ridge, Matsuo-san snapped together a sonde and demonstrated how to probe for a suitable depth of snow. Evidently, the snow was not only deep enough but had good holding powers too – the lower half of the probe stayed embedded in the drift. 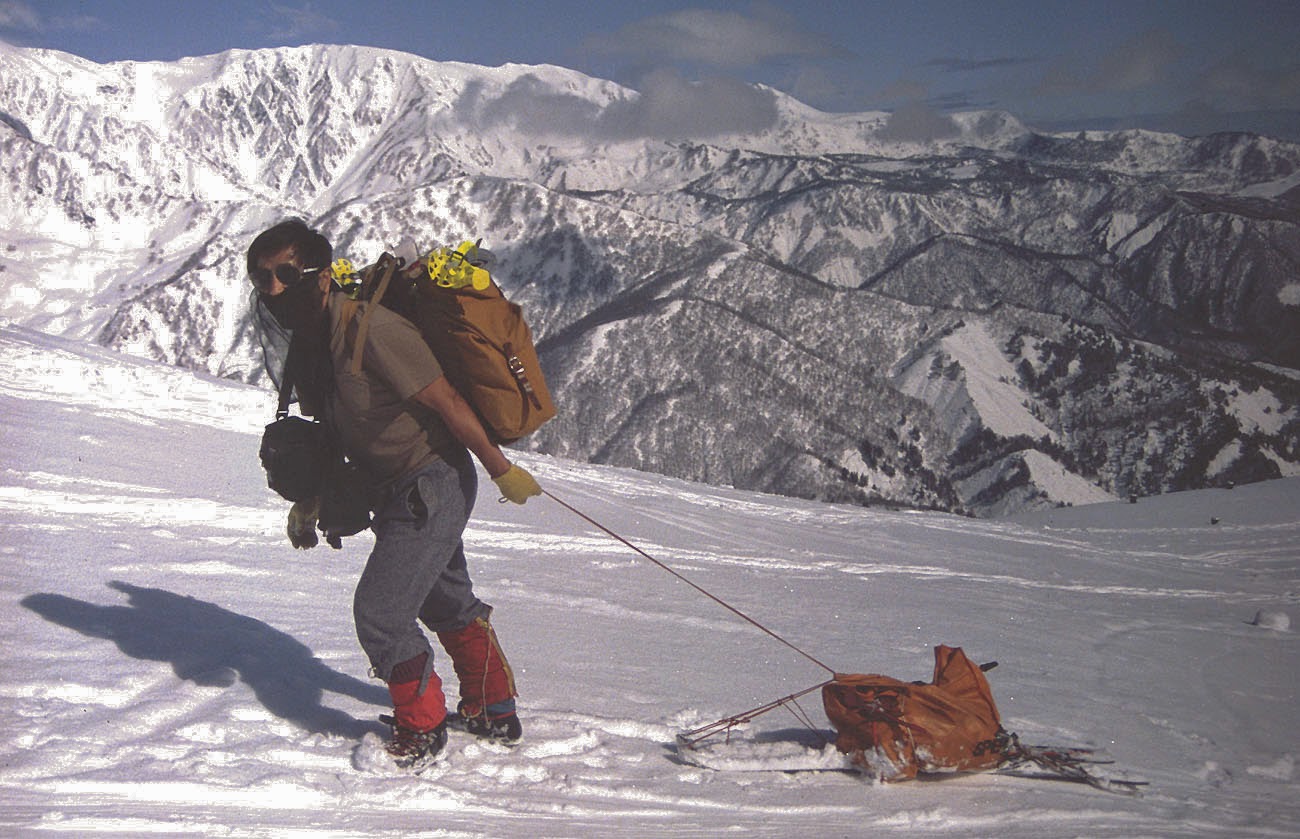 We set to work under a hot spring sun. Some snowholing precepts you’ll read in all the manuals – site the door on the downwind side (almost automatic when digging into a lee slope), and angle the entry way slightly upwards, so as to trap warm air in the dwelling. Others are obvious when you think about it – mark out your territory by parking your skis around it, unless you want an unexpected guest to come crashing through the roof at dinner time. 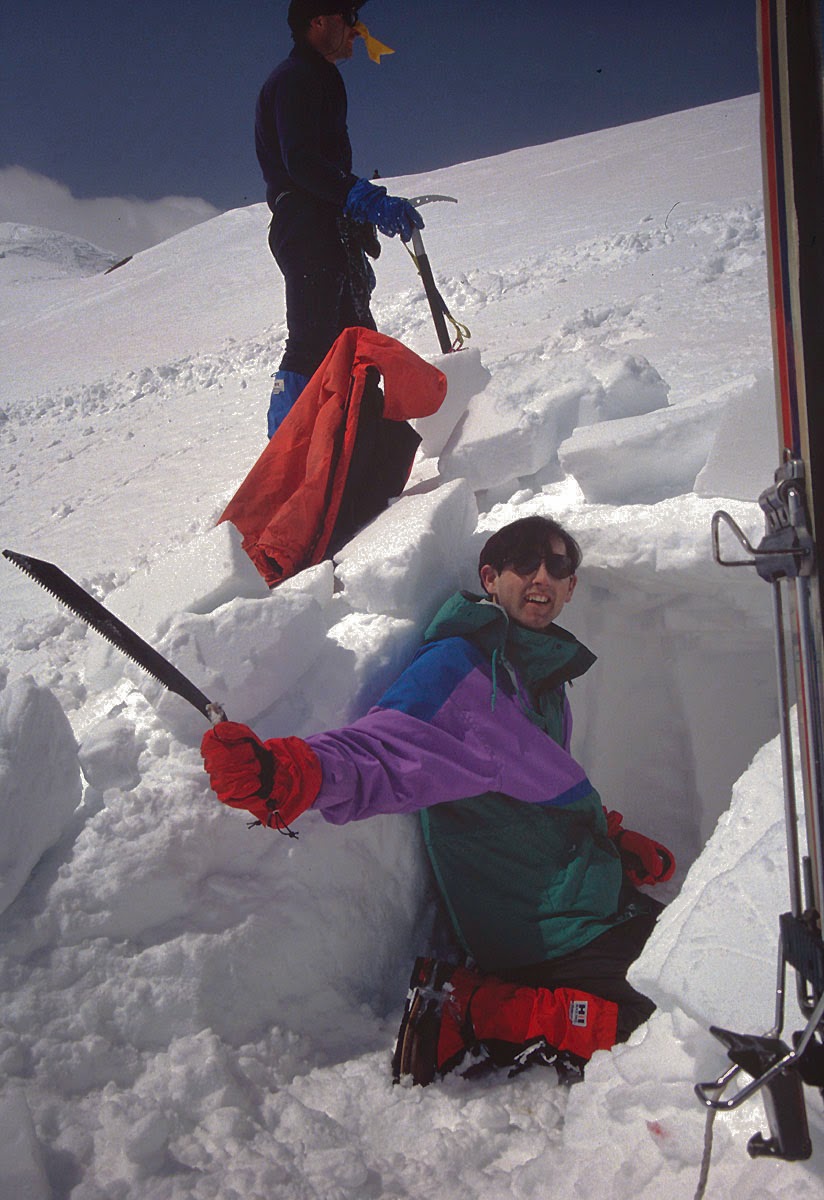 One point: if you’re building a snowhole for five, then snow shovels are, quite literally, not going to cut it. You might get away with them in fluffy early-season snow, but for the sterner consistencies of spring névé, you’re going to need snow-saws, the sharper and toothier the better. Saw the snow into blocks, and lift out with the snow shovels.

Brandishing our new snow-saws like the finest Gassan blades, we took it in turns to tunnel. Quickly we discovered another key principle of snowholing – allow plenty of time. A comfortable five-person bivvy is going to take three to four hours of unremitting labour to finish. So forget about leaving it until nightfall to start work.

Once we’d roughed out the sleeping chamber, Matsuo-san took a large sheet of thin polythene and pinned it to the ceiling with small bamboo pegs – a lightweight solution to the usual irk of unrefined snowholes, which is water dripping from the roof. Remember you read this tip here first.

Even in spring, the temperature on Karamatsu drops suddenly once the sun sinks below the ridge. It was time to test our new abode. Leaving our packs in the vestibule, we snake-crawled inside one by one – yes, the ceiling was low, but no more humiliating than the average teahouse. The Yamato Nadeshiko, like a Heian lady disappearing behind a screen, took up residence in a far corner; possibly she found the company too raucous. 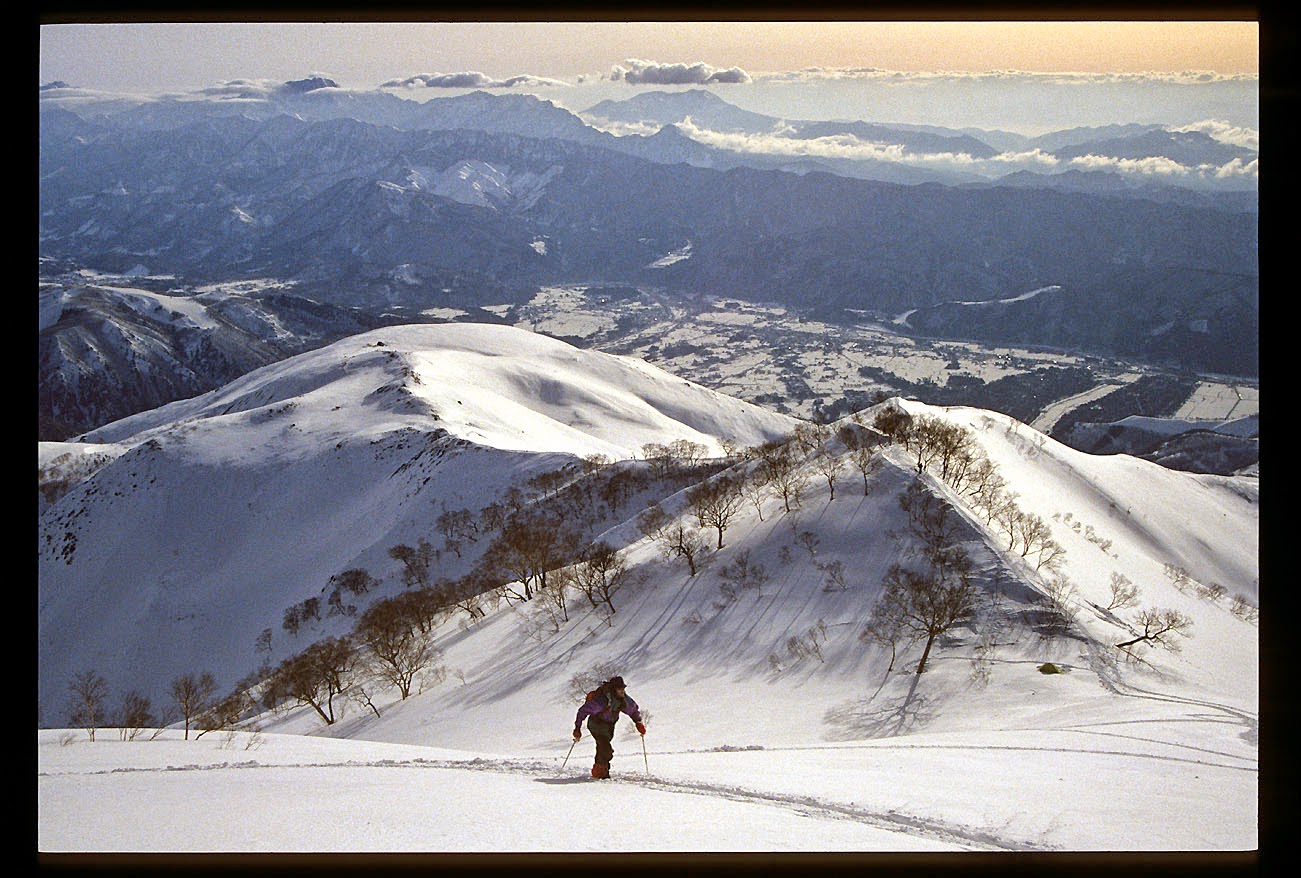 Well exercised by the sawing and shovelling, we slept soundly in our quiet subnivean cocoon. How quietly we didn’t fully appreciate until next morning, when we compared notes with two friends who’d overnighted on the ridge above – slatting and flapping in the stiff night wind, their tent had been as lively as a Roppongi tavern, and they hadn’t had a wink of sleep. Not a wink.

Snowholes, though ... you gotta dig them.
Posted by Project Hyakumeizan at 8:43 PM