October 10: the bear scuttles deferentially across our downward path and disappears into the bushes. Nothing to worry about, says the Sensei, who was the only one to see it. It was just an ichinensei – a yearling cub. Quite cute, indeed. 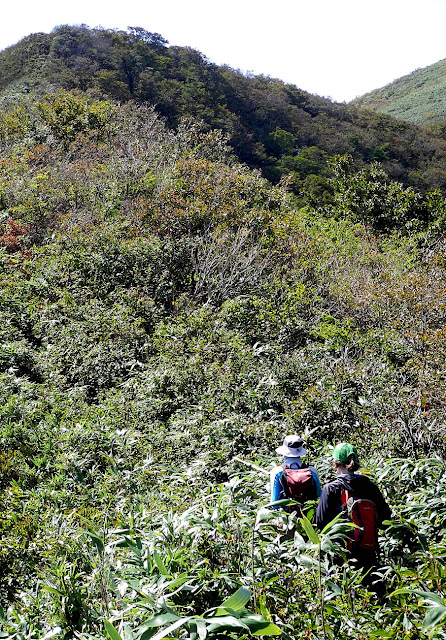 Genanpo (“Gingko Peak”) is where you’d expect to meet bears. So retiring is the mountain that, while driving in this morning, we aren’t sure even where to find it. But Amber sorts us with her GPS-enabled phone, and we discover the trailhead after one false start. Judging by its overgrown state, this is not a popular way up. If mountain mystics pioneered this path, as some say, it must have been a while back. 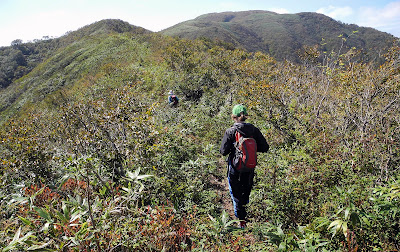 It’s said that books like Nihon Hyakumeizan have encouraged a star system among Japanese peaks. Anointed eminences, such as Hakusan just over the prefectural border from here, erode away under the boots of Meizan-seeking multitudes. Whereas summits without name or fame, like this one, have so few visitors that the wilderness has overwhelmed them.

That’s how it seems when we are sidetracked into a dead-end by a wild hassle of boar trails. For the third time in an hour, we become uncertain of our position. We consult a pair of elderly men who’ve come up to gather mushrooms. Fortunately, one of them helped to restore the path about ten years ago. Yes, it’s overgrown in places, he says, though you should be able to find it if you keep going straight upwards. 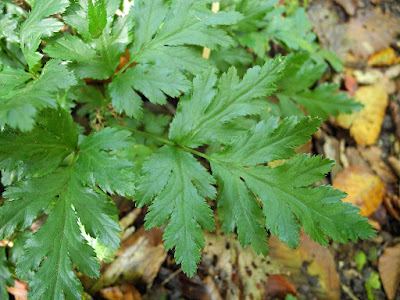 It isn’t only the trail that has fallen into disuse. On a previous trip, the Sensei noticed a patch of “oren” (Coptis japonica Makino?), one of fifty herbs with a prominent role in Chinese medicine. It was probably planted here by somebody from a nearby village. Now, only scattered plants remain in this clearing. The Sensei digs one up to show us the orange nodules among its roots. Apparently they have a bitter taste, which may explain why oren was used as a vermifuge. 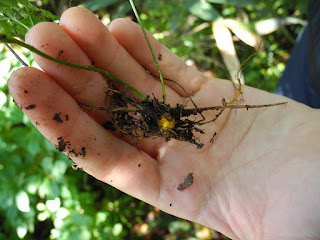 We climb up through the plantations of cryptomeria. This is the “satoyama”, or the part of the mountain that is used by villagers. Or rather used to be used. The trees look neglected, their bark shredded by nibbling deer or clawed by bears. Weird fungi colonise rotting logs. 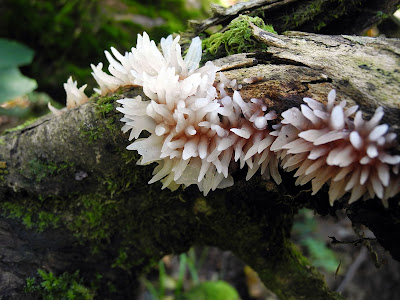 Despite the mountain's name, not a single gingko tree is to be seen. Apparently, the silver (金) in the mountain's name refers to a mine that was once worked here. Stands of beech mark the boundary with the “okuyama”, the wild ‘mountain beyond’. In one place, where branches block the path, Amber takes to a rocky streambed to find a way round. Up on a treeless ridge, clouds come drifting in as we navigate waist-high seas of panda grass. 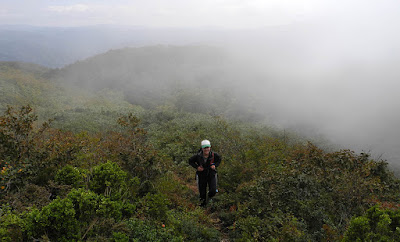 The Sensei, a veteran of bushwhacking in Oku-Etsu, the part of Echizen province best translated as ‘the back of beyond’, insists on going ahead – it would be easy to lose sight of the path here and drown in seas of sasa. 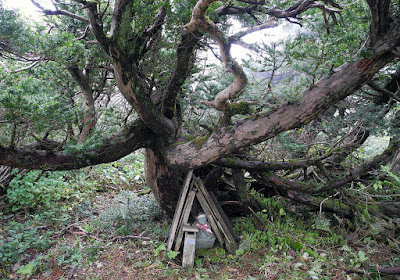 A jizo figure, hiding in the depths of a yew bush, announces the summit slope – at 1,440 metres or so, the mountain isn’t high enough for creeping pine. We munch our onigiri beside the summit shrine. There are four or five other people there, but their shirts aren’t ripped and their hair isn’t full of twigs and leaves. They must have come up by an easier way. 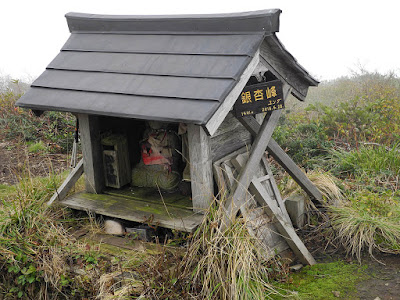 It’s on the way down that the Sensei sees the bear cub, patrolling between the ‘wild mountain’ and the ‘village mountain’. We take a leaf out of Tanaka Yōki’s book – in his lecture yesterday, he described how, questing the mountains of Hokkaidō, he chanted “o-jama shimasu” (je m'excuse de vous déranger) to give the bears warning. We chorus in alto, soprano and baritone as we yomp down through the gloomy satoyama.

Back in the van, I encounter another of the mountain’s denizens. Something is clambering up my shirt, fortunately on the outside. I open the window and toss out a brown and sturdy-looking tick. Bears and ticks – you shouldn’t take them home with you. They don't make good pets.
Posted by Project Hyakumeizan at 9:05 PM