The river is never the same (3)

Concluded: an excursion along the Kurobe River's Upper Corridor

Next morning, after coffee and noodles, we donned the clammy wetsuits and took to the river again, bracing ourselves for the moment when the cold water seeped inside our clothing. Shadows still filled the gorge as, waist-deep, we forged our way upstream. Halfway up a long straight channel, I lost my footing. For a moment, the sensation was infinitely relaxing. Reclining on my backpack, the current no longer buffeting, I watched the mountains slide gracefully upstream. 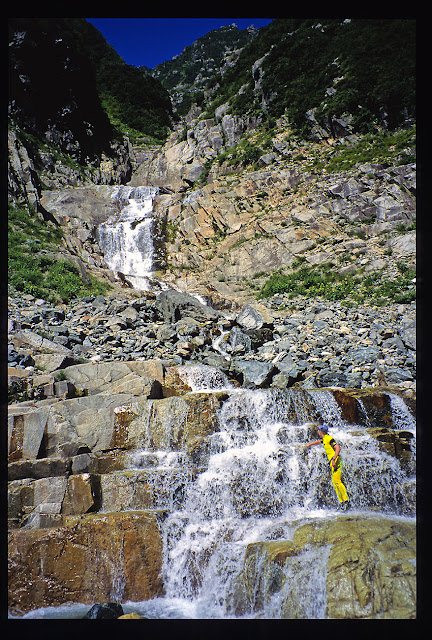 A phrase from a novel about a grass pillow floated to mind: “Approach everything rationally, and you become harsh. Pole along in the stream of emotions, and you will be swept away by the current. Give free rein to your desires, and you become uncomfortably confined. It is not a very agreeable place to live, this world of ours.” Swept away by the current – Soseki’s words of warning reminded me of the rapids lying in wait. Reluctantly, I rolled over and swam to shallower ground. 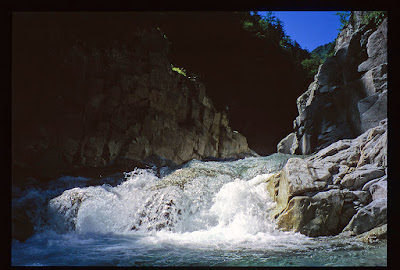 By the time the sun came over the ridge, we were coming up to Kinsaku Junction. With each tributary we passed, the river was losing a measure of its strength, like a wrestler reeling back into the fray after each successive round. Now we’d gained an edge, we could afford to look about and admire the scenery. 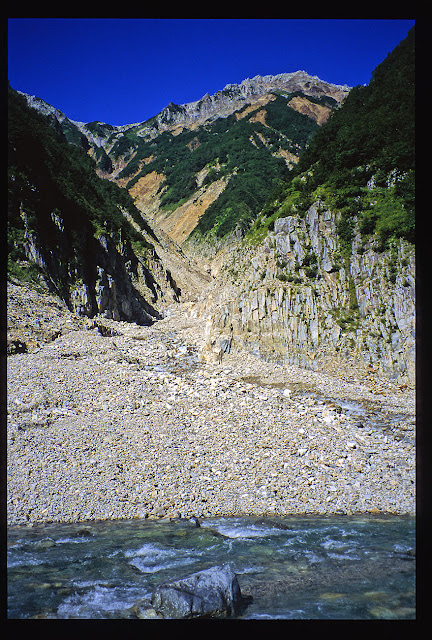 The mid-morning light turned each set of rapids into glittering cascades of tumbling crystal. Bypassing stretches of white water on bulging ledges of peerless white granite, we waded knee-deep through gravelly pools and sent the fish-fry darting away in front of our wavering shadows. The pink rope stayed in my pack; we wouldn’t need it again. 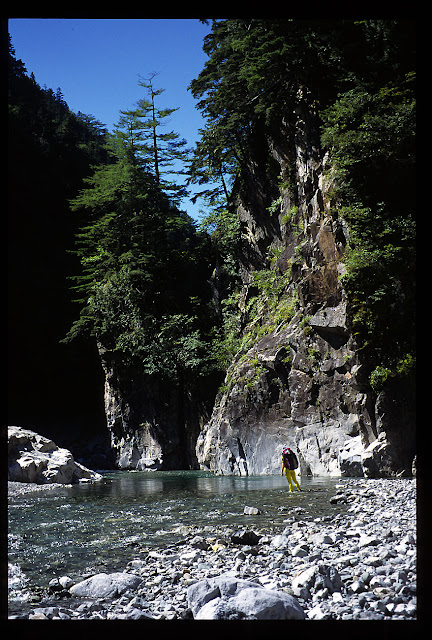 In the river’s higher reaches – the guidebook calls them the Inner Corridor (“Oku no Rōka”) – the mountains stand back from the river, letting the morning light flood down into the valley. After yesterday evening’s struggle in the shadows, we were now wading through a sawa of light. Somewhere after the Tateishi, a stone splinter that leans perilously towards the river, we splashed our way across the foot of a handsome stepped waterfall. There wasn’t much conversation; we were too rapt on threading our way through the gorge, merging our flow with the river’s. 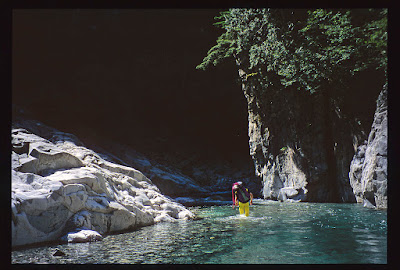 Mahayana Buddhism, wrote Yukio Mishima in one of his last novels, interpreted the world as a great white cascade which never pauses. Since the world presented the form of a waterfall, both the basic cause of that world and the basis of man's perception of it were waterfalls. It is a world that lives and dies at every moment. There is no definite proof of existence in either past or future, and only the present instant which one can touch with one's hand and see with one's eye is real. 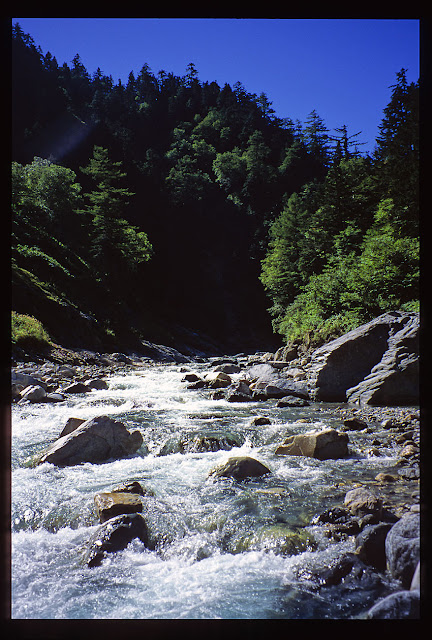 For half a morning, only the present instant was real. So absorbed were we by our weaving path past rapids and pools that neither of us could say for certain when the light faded. But when we hauled ourselves out of the river opposite the Yakushi-zawa hut, we saw that veil clouds had covered the sky. A spell had broken.

I do not know much about gods; but I think that the river
Is a strong brown god - sullen, untamed and intractable …

You do not know how long you are in a river when the current moves swiftly. It seems a long time and it may be very short.

"Oh, Eeyore, you are wet!" said Piglet, feeling him. Eeyore shook himself, and asked somebody to explain to Piglet what happened when you had been inside a river for quite a long time.


A A Milne, Winnie the Pooh 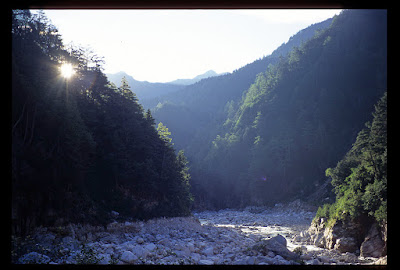 Posted by Project Hyakumeizan at 9:04 PM