October 11: to Kanazawa, first to take a turn around Kenrokuen. The famous garden is approached through the grounds of the old castle. 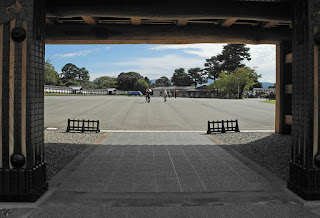 This was where Fukada Kyūya did his military training in the pre-war years, when the castle housed an army base. In off-duty hours, it’s recorded that the future Hyakumeizan author would climb a tower and console himself by gazing through the wooden gratings at distant Hakusan, his native mountain.

Kenrokuen was supposed to combine the six aspects of a perfect garden: spaciousness and seclusion, artifice and antiquity, water-courses and panoramas – I take this from the excellent website of the prefectural authorities.

Yet one wonders how much of the original vision has survived fire, repurposing as a public park, the depredations of war – the pines were tapped for fuel – and repeated restorations. Never mind, the sacred mountain of Horai is still there. Indeed, by some accounts, there may even be two of them, one floating in the Hisago-ike pond, and another in the Kasumi-ga-ike.

Then to the prefectural history museum, which occupies a fine brick building that once served as an arsenal. The meizanologist’s eye was caught by a wall tableau showing a dense network of temples across Hokuriku that were dedicated to mountain religions. Not all of them belonged to the Hakusan faith.

On the way back to the station, there was just time to drop in on the Ishikawa Institute of Modern Literature, which inhabits part of the former Ishikawa No.4 Higher Normal School buildings. An exhibition on mountain writers runs until November 27, to mark the new “Mountain Day” national holiday (August 11) and front-run next year’s 1,300th anniversary of Hakusan’s first ascent by Monk Taichō. (We will hear more about him soon.)

Pride of place was accorded to Fukada Kyūya, as a native of Ishikawa – he was born in Daishōji, halfway between Fukui and Kanazawa, and lived in the latter city for a few years after the war, until his wife got fed up with the snowy winters. Poignantly, one photo showed the Hyakumeizan author on his last mountain (below). 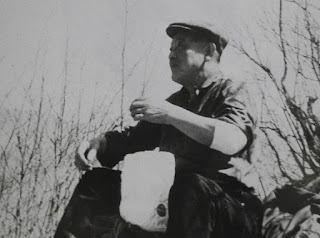 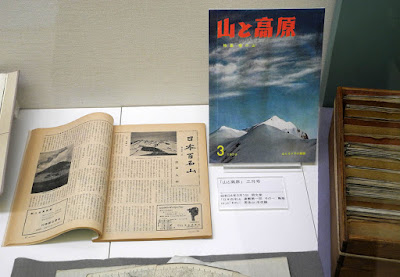 It was good to see the English version accorded the honour of a display cabinet too: 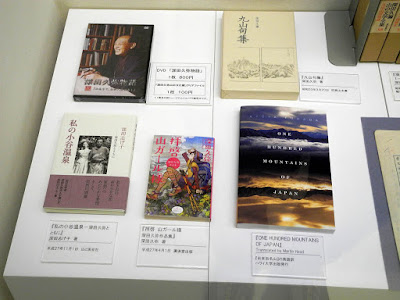 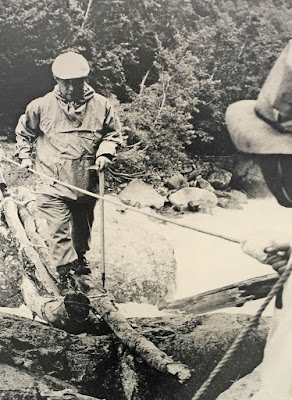 The photos of Inoue Yasushi visiting the Japan Alps (above) and practising with an ice-axe (below) help to explain why his famous mountain novel has the ring of authenticity. 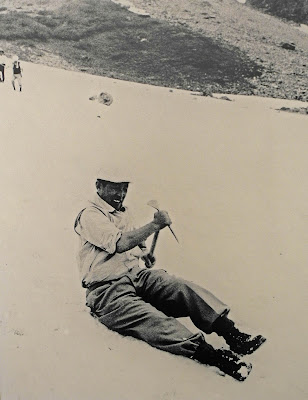 Alas for English speakers, the only translation of Hyōheki is in German. Now there’s a challenge for somebody….

Posted by Project Hyakumeizan at 6:30 PM

And thanks again for that translation.