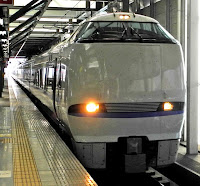 29 October: The plan is to leave Taichō in peace today. I’m riding a Thunderbird, which is a train, though it feels more like a submarine, heading southwards into rain that is falling more prodigally by the minute. Lake Biwa is a sheet of beaten pewter, the opposite mountains buried under a leaden pall. Typhoon 22 has yet to make landfall, but it has galvanised the autumn rain front into a frenzy of precipitation.

Two hours later, in a tropical downpour, I meet up with the Sempai and his family at Nara station. In our younger days, he and I climbed Hakusan together. We walk the streaming streets, shoes awash, to the Nara National Museum. For just three weeks in October and November each year, there is a chance to take in an exhibition of treasures from the Shōsō-in, the storehouse of the Tōdai-ji temple.

The story of how the treasures were acquired is a sad one. When Emperor Shōmu died in 756, his widowed consort Kōmyō donated his possessions to the newly dedicated Great Buddha at the Tōdai-ji. For, as she said in her dedication letter of July 22 in that year,

The list given above contains treasures that have been handled by the Emperor and articles that served him in the palace. These objects remind me of the bygone days, and the sight of them causes me bitter grief.

Indeed, so many treasures were entrusted to the Shōsō-in that fewer than a tenth can be shown in any given year. So every exhibition yields up surprises among the musical instruments, offering stands, gigaku masks, silk banners, and eight-lobed mirrors.


Not everything is an artwork of ageless sublimity. I’m about to give up on a display case full of yellowing parchments – tax assessments and the like – when a map catches my eye. It shows farmlands owned by the Tōdai-ji in the province of Echizen, as Fukui was then known. By apparent coincidence, these fields were located more or less on the doorstep of Taichō’s birthplace. It looks as if we’ve caught up with the monk again. Or is it the other way round?


Although born and bred in Echizen, Taichō had quite a bit to do with Nara. When word of the young monk’s spiritual powers reached the court, Emperor Monmu is said to have appointed him as a guardian cleric of the state (鎮護国家法師) in 702. This was when he was just 21. Then, in 722, after he’d honed his prowess by meditating in a cave under Hakusan’s summit for one thousand days and nights, he travelled to Nara to cure an illness afflicting the Empress Genshō.

In 736, Taichō returned to Nara, this time to receive from Monk Genbō a a sutra scroll in honour of the Eleven-Headed Kannon. The following year, the ninth of Tempyō, he performed a rite of repentance to ward off an outbreak of smallpox that threatened the capital. For this service he was raised to the high monastic rank of “wajō” or “kashō” – the reading of the characters varies according to the religious order.


We move on to another set of cabinets. Here are displayed an apron once used in a gigaku dance, and a dedication table for offerings. Like some wormhole in space, the Shōsō-in exhibition can short out the intervening centuries. In this case, it warps us back to an April day in the fourth year of Tempyō-shōhō (752), when all the court and priesthood are gathered in front of the Great Buddha of the Tōdai-ji, its enclosure streaming with silken banners, ready for the gigantic statue’s inauguration. Both apron and table are known to have been used on that august occasion.


Seated in front of the statue, facing northwards for perhaps the only time in his life, so that he could show fealty to the Buddha, retired Emperor Shōmu was fortunate to be there. He’d recovered from a serious illness a few months previously, only after the Empress Kōmyō had made an appeal to the Eleven-Headed Kannon. Monk Rōben (689-773), a near contemporary of Taichō, was certainly there too, presiding over the dedication of the statue whose construction he’d supervised over long years. Together, they must have witnessed the gigaku performance, and perhaps inspected the little table with its votive offerings.


Alas, Monk Genbō could not attend, having died in exile a few years previously, and nor could Monk Gyōki (668-749), who had travelled the length and breadth of Japan to raise funds  – the statue’s completion is said almost to have bankrupted the country. But Monk Gyōki does make two appearances in Taichō’s story. According to a record of Mt Kōtakami in what is now Shiga Prefecture, the temples there were founded by Gyōki and later revived by Taichō. The legend of Taichō’s life also has Gyōki visiting the Echizen monk on Hakusan.

Oddly enough, both Rōben and Gyōki turn up in adjacent chapters of Nihon Hyakumeizan, Japan’s most famous mountain book. Rōben is said to have inaugurated Ōyama in the Tanzawa range (Chapter 71) as early as the seventh year of Tempyō Shōhō (755), while the Daibosatsu Pass (Chapter 70) allegedly took its name, indirectly, from Gyōki:-

The path up the pass starts at an old temple, the Unpōji. Built in the Irimoya style and with a roof of cypress-wood shingles, its elegant main hall is well worthy of its designation as a national treasure. The temple was founded in the seventeenth year of Tempyō (745) by the monk Gyōki Bosatsu, after he saw a vision in these mountains, where he had come to practice austerities. The pass, it is said, takes its name from the temple.

Such legends should, of course, be treated with care. Samuel C. Morse, whose paper on the Eleven-Headed Kannon in early Heian times furnishes much of the foregoing, has this to say about Taichō:

“much of the story … is certainly fiction, yet enough details of his life correspond to information in other, more reliable sources to conclude that certain aspects are in all likelihood true: a mendicant monk from Echizen had a vision that prompted him to travel to the capital to seek out religious texts, and while he was there he participated in the rituals held in the capital to attempt to quell the smallpox epidemic that ravaged Japan in 737…”

This much can be said, if we refer to Professor Morse’s article. During Taichō’s lifetime, the Eleven-Headed Kannon saw a steady increase in her popularity, probably on account of her healing powers. And nowhere was she more popular than at the northern end of Lake Biwa, and in the provinces of Wakasa and Echizen, along the Japan Sea coast.

Temples with fine statues of the Eleven-Headed Kannon are often found in remote or mountainous regions, as on Mt Kōtakami. In Echizen, the oldest statue of this deity is found close to Taichō’s birthplace, at the Futagami Kannondō (right), which stands within the lands once owned by the Tōdai-ji, just as shown in the Shōsō-in’s map. Immediately to the south rises Monju-san, a mountain said to have been “opened” by Taichō in the same year as his Hakusan ascent.

The Eleven-Headed Kannon, the healing of the sick, and an apparent ferment of monastic mountaineering in the Tempyō era – all these make for a rich yet mysterious mix. I start to wonder if this association might be illuminated by yet another exhibit, such as that fine shakujō over there.


According to the catalogue, pilgrims used such implements in the mountains to “chase off snakes and dangerous insects, stabilize their steps, and announce their arrival in front of a gate”. Indeed, this particular staff bears an uncanny resemblance to the one found on Mt Tsurugi in 1907 and which can now be inspected in the Tateyama Museum.

I'm heading over to take a closer look when I hear a discreet whisper at my elbow. It is the Senpai. What about lunch, he suggests. His wife and children have already decamped to the canteen, having performed sufficient museum austerities for the morning, and we might like to join them. There's no question of eating elsewhere - the rain is sheeting down harder than ever outside.

It looks as if the question of Taichō’s mountaineering kit - and where he used it - will have to wait for another day. 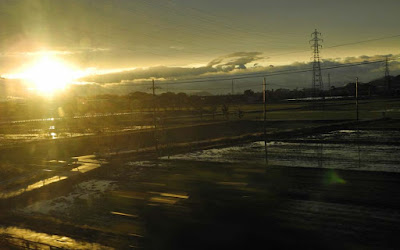 Posted by Project Hyakumeizan at 9:14 PM