28 October, Fukui: it’s raining again as we drive to the Prefectural History Museum. A large banner at the front door advertises the exhibition – “Taichō: exploring the significance of the Hakusan faith”. 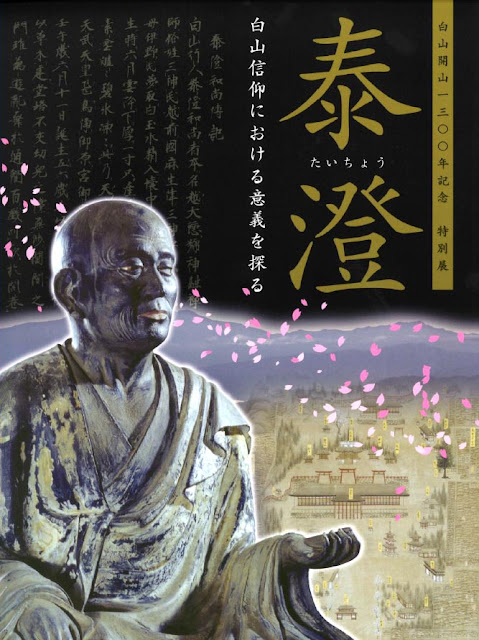 As good historians should, the exhibition curators start by kicking the tyres. That is, of their sources. Actually, there is only one source for Taichō’s story. This is the Taichō-kashō-denki, preserved only in a handful of ancient scrolls – like the one in front of us in the display cabinet.

There is no original for this manuscript, only copies, of which the oldest known was transcribed in 1325 and preserved at a temple library in Yokohama, the so-called Kanazawa Bunko. Other copies belong to the Ozoe Mitsutani family, to Heisenji, a temple-turned-shrine in the eastern outback of Fukui Prefecture, and the  Ōtani-dera, a temple at the foot of Ochi-san. The text of the Taichō-kashō-denki did not appear in print until 1953.

According to the Taichō-kashō-denki itself, the story of Taichō was first written down by a monk at the Ōtani-dera, around the year 957, in mid-Heian times, based on the verbal account given him by a senior cleric of the Tendai sect. Thus, even if we accept that the Taichō-kashō-denki did originate around then, the chronicle dates from almost two centuries after Taichō’s death.

Now we understand why Ōtani-sensei had given us the tickets. Several of the key exhibits, including the scroll, come from his home temple, the eponymous Ōtani-dera, at the foot of Ochi-san. They’ve also lent this wooden sculpture of Taichō, seated in meditation and flanked by two attendants. 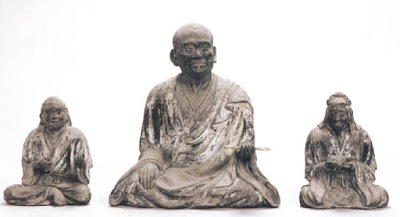 The central figure wears a wise, almost humorous expression. Although less than a foot high, the figure looks as if it was carved from the life. But that cannot be: the catalogue dates it to 1493. 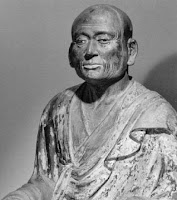 The two acolytes must be Fuseri and Kanbe-no-Kyosada. Fuseri, it is said, travelled from what is now Nanao City on the Noto Peninsula to join Taichō on Ochi-san. There it was his practice to magically exact votives of rice from ships plying on the Japan Sea. (Even sages have to eat.)

Kanbe, the captain of one of these ships, refused to provide this tribute, whereupon Fuseri flew into a rage and sucked the ship’s entire cargo onto the mountaintop. When Taichō intervened, and graciously returned Kanbe’s rice, the sea captain decided to become the monk’s second disciple.

We move on to the exhibition’s second section, entitled “Ochi-san: the mountain where everything began”. Now we’re on firmer historical ground. There is a fine painting of the hill as it was during the heyday of popular pilgrimages, during the long peaceful centuries of the Edo period.

You can see the Otani-dera at the mountain’s foot, and the summit shrine too – alas, most of the buildings in between have vanished. For pilgrims with more ambitious goals, there are Edo-period guidebooks to climbing Hakusan too.

Of course, the Hakusan faith took root long before the Edo period. The Hakusan deity first appears in a chronicle of early Heian times, and a Hakusan shrine in Kaga features in the Engishiki, a compilation of laws and customs completed in 927. By 994, no less a personage than Sei Shōnagon was invoking the goddess of Hakusan.

By Muromachi times, pilgrims were filing up the mountain from three directions – from Heisenji in Echizen, the temple that once held sway over the summit, and from Kaga and Gifu too. The Hakusan faith spread all over Japan: even today, there are some 2,700 Hakusan shrines all over Japan, rather more than enshrine the deity of Mt Fuji.

A small but brightly coloured figurine catches my eye. Labelled as a “goddess”, it dates from the Northern and Southern Courts period (1336-1392), and belongs to the temple of Eiheiji, the original Zen temple, sited just up the road from Fukui. 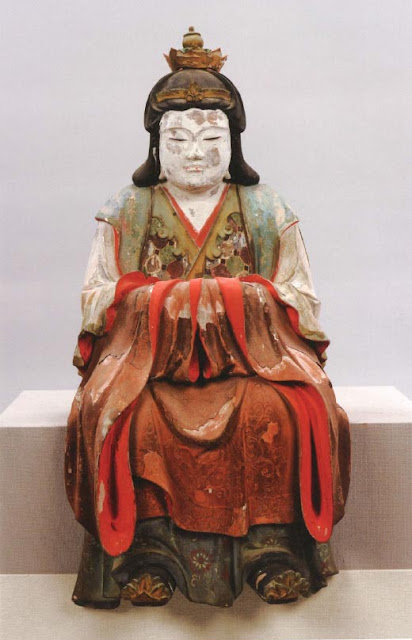 Even the Zen masters, it seems, deferred to the goddess of Hakusan, a tradition that goes back all the way to their order’s founding. It seems that Japan’s first Zen proselyte had a debt to repay.

It happened like this. Just as Monk Dōgen was about to come home from five years of study in China, he discovered a crucial Buddhist text in a temple library. As his ship was due to leave the very next morning, it seemed impossible that he could transcribe it in time. But the goddess of Hakusan appeared to him in a vision, and helped him copy the scroll at a superhuman speed. In gratitude, he appointed her as the guardian goddess of Eiheiji.

There’s also a small figure of the Kannon (right) – she’s just over a metre high. The statue comes from Heisenji, which is only appropriate. For it was a vision of the Kannon in 716, in the forest glade where Heisenji would one day be built, that set Taichō on his way to the summit of Hakusan. It’s fair to say that Taichō’s own guardian deity was the Eleven-Headed Kannon, or sometimes the goddess of Hakusan (for the latter could represent the former in the syncretic Buddhist thinking of those times).

Out of the corner of my eye, I see the Sensei signalling to me. Could it be that we’ve inspected enough scrolls and statues for the day? Only when we step outside into the fresh air and the rain does it hit me, though. The exhibition had lived up to its title – we’d learned a lot about the Hakusan faith. But where was the religion’s founder in all this?

Somehow Monk Taichō seemed as elusive as ever…

Posted by Project Hyakumeizan at 9:02 AM