"Mode of Travelling in the High Alps" (9)

It happens now and then, that some interest is felt in deciding upon the comparative height of neighbouring peaks, nearly of the same elevation. An instance may be given in the case of the Mischabelhorner, where the relative height of the Dom and the Taeschhorn is not yet clearly determined. 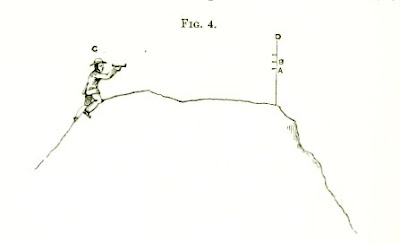 A traveller, provided with a spirit level, who attains either peak may easily decide such a question as this, where the shape of the summit will allow him to place himself at a distance of twelve or fifteen feet from one of his companions placed between him and the peak which he wishes to compare with his own position.

Let c (fig. 4) represent the observer, D an alpenstock held vertically between him and the peak to be observed. Let the point of a knife be carried along the edge of the alpenstock by an assistant., until it is exactly on a level with the eye; and let him make a mark at that point (A), and a similar mark at the point B, exactly in a line between the observer's eye and the top of the distant peak: the distance from his eye to the edge of the alpenstock, and the space between the two marks A and n, should then be accurately measured.

Where maps exist on which the relative position of the peaks is laid down from actual survey, the distance between them may be found with sufficient accuracy from the scale of the map, and the difference of height between the peaks is found by a rule of three sum. In case, however, this distance cannot be ascertained with moderate accuracy, the bearing of the second peak should be observed with the compass, and attention given to discover at the foot of the mountain some convenient spot (bearing about 90° from the line joining the two peaks) from whence they are both visible.

From such a position it will not be difficult, by some method similar to those already suggested, to estimate roughly the distance between the two peaks. When these are near together, say, not more than a mile apart, and of nearly the same height, no correction need be made, either for refraction or for the curvature of the earth.

Posted by Project Hyakumeizan at 6:35 PM