Even at the time, some frowned at the idea of naming the world's highest mountain after a surveyor...
In a previous post, we suggested that the former colonial powers were wont to bespatter the globe with mountain names that celebrated mainly dead white Caucasian males, such as Rainier, McKinley and Morrison. 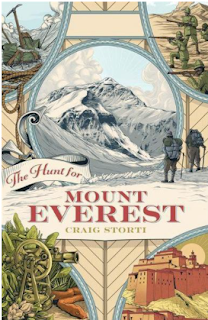 But this may be to oversimplify. A reading of Craig Storti’s The Hunt for Mount Everest shows that not all colonialists strove to overwrite local mountain names. On the contrary, the British surveyors who first mapped India during the 1840s and 1850s were careful to respect and preserve the local, indigenous names of most geographical features.

And this rule held until the height of a certain Himalayan “Peak XV” came in as 29,000 feet or so. Thus, when Andrew Waugh, the chief surveyor, proposed to name this mountain after an irascible former boss, he ignited a controversy. A few weeks after Waugh’s announcement, Brian Hodgson, a former British emissary to Kathmandu, objected that he’d heard this mountain regularly referred to as Deodanga.

A further challenge came from the German explorer Hermann Schlagintweit, who had visited Nepal in 1855. He and his brothers had measured the same peak that Hodgson had (mistakenly) identified as the mountain today known as Everest, but claimed that the locals called it Gauri Sankar. And this was the name that they printed on their map of the region published in Berlin in 1862, a decision that was initially endorsed by Britain’s Royal Geographical Society.

Waugh then formed a committee to look into these counterclaims. Naturally enough, it found that the Gauri Sankar/Deodanga alternatives were “indefinite and unacceptable”, leaving the way clear for the official adoption of the Everest name. The case for Gauri Sankar was further undermined when it was found, in 1903, to apply to a completely different mountain, some 36 miles away from Everest.

In 1921, the first British expedition to what was by now confirmed as the world’s highest mountain entered Tibet. And they soon discovered that the local people already had a name for the peak. Remarkably, this name, or a variant of it, had already appeared on a map of China published in Paris as far back as 1733 by Jean-Baptiste Bourgignon d'Anville – on which the mountain is identified as “M. Tchoumour Lancma”. But, by 1921, the name of “Everest” was already too well established for “Chomolungma” to get a look in on western maps.

It is unclear what Waugh’s boss, the original owner of the Everest name, really thought of his successor’s blatant act of sycophancy. Wikipedia says that he at first raised an objection, on the grounds that “Everest” might be impossible to write in Persian or Hindi. But Storti says he was “gratified”. Both may be right: Everest's protestations may have been no more than perfunctory.

In any case, the mountain’s connection with the original Sir George Everest (1790-1866) is fading fast. Probably few who approach the mountain remember that he was Surveyor General of India, not to mention a member of the Neptune Lodge of Freemasons. And even fewer will recall that his name was once correctly pronounced as “Eev-rist” (/ˈiːvrɪst/) rather than “Everest”. Attached to the world’s highest mountain, the name has taken on a new life of its own.
References
Craig Storti, The Hunt for Mount Everest, Nicholas Brealey, 2021

Posted by Project Hyakumeizan at 6:07 PM