The tiltyard of alpinism


Summer camp gets hosed down in Japan's Northern Alps, provoking outbreak of schadenfreude

“If Hodaka dominates the southern end of the Northern Alps, then Tsurugi lords it over the northern extremity,” says Fukada Kyuya in his Hyakumeizan, a book about one hundred mountains of Japan. “Defended by tier on tier of cliffs, both peaks are menacing, fierce, and noble of aspect. For this reason, their snows and ice-faces are the natural choice of elite climbing associations vying to put up new routes, or of university clubs holding summer camps for new generations of mountaineers.” 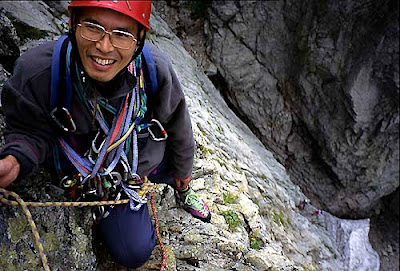 Ah yes, summer camps. As no self-respecting Japanese mountaineering club can allow summer to pass without a “gasshuku” or boot camp, Fujii-san and I agreed that we must have one too. I thought we’d decided on my tent and my car, which had airconditioning. But, next day, we somehow found ourselves setting out from hot and humid Tokyo at 3.30am in Fujii-san’s un-airconditioned Toyota and with a tent borrowed from Mrs Fujii. But this was fine too; it’s always best to deal with the wild cards in any mountaineering trip before leaving town. Fortunately the tent was in better shape than the car.

A quick breakfast in the Seven-Eleven at Ohmachi, the Big Town in Shinano, and we boarded the tunnel bus to the Kurobe dam, then the rack-railway, followed by a cable car and, finally, another tunnel bus. This transport system deposits you on the crater floor of Tateyama at 2,800 metres almost as swiftly as it has emptied your wallet. “Like vultures,” I heard Fujii-san murmuring, although the convenience was indisputable.

We set off across the Tateyama bowl and up its bounding ridge-wall, all in cloud. At 3pm, we were coming down the long, steep valley underneath Tsurugi, slipping and sliding on the permanent snowfield. After pitching Mrs Fujii’s tent, we awarded ourselves a beer at the nearby Masago hut.

Before cooking supper, something moved me to take a look at the approach to our planned climb. Fujii-san had designs on the 600-metre stretch of slabs on Minor Peak, one of eight turrets on Yatsumine Ridge. According to the guidebook, the approach involved “some Grade III scrambling beside a waterfall’. The (rarely wasted) time spent in reconnaissance revealed that ‘Grade III’ involved traversing above the waterfall on loose, sloping, and grassy rock without a belay in sight. A slip - all too likely - would mean a ten-metre fall into the unattractive pit that the cascade had carved in the snowfield below. I went back to the tent and suggested that Fujii-san went and looked for himself. Supper (spaghetti in seafood sauce, with tuna and seaweed salad, followed by kiwi fruit) was ready when he came back, in a reflective mood. Without much discussion, Minor Peak was kicked into touch.

Tsurugi always provokes more thought than the rest of the Northern Alps. It is wilder, rockier, wetter, and windier than anywhere else. As the first obstacle to the winds blowing from Siberia across the Japan Sea, it receives a huge annual tribute of snow and rain. Even the view from the campsite is forbidding: below the hut the snow has collapsed in giant blocks to reveal a roaring river underneath. Bounding the valley's north side are the feet of giant ridges that rear up into the cloud. Tangled forest covers the southern slopes, suggesting that this mountain is climbed only on sufferance. Many of its features – that saw-tooth skyline above the camp accented by a solitary crooked tree – are not for climbers and never will be. 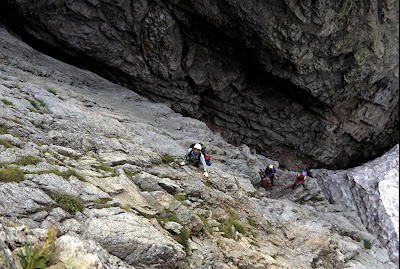 “Tsurugi’s formidable walls and cliffs were once thought unscaleable but they can now be ascended by several different routes,” says Fukada Kyuya. “Meanwhile, bold young rock climbers look for ever-harder lines. As they do so, certain features have started to sport European-sounding tags such as "Needle" or "Chinne". These overlay the more traditional epithets for the features known as Ōmado, Komado, San-no-mado, Yatsu-mine and others. The Manyōshū’s Tachiyama, the Tsurugi of the medieval mystics has become a tiltyard for alpinistic talents.”

Conscious that our own alpinistic talents were modest, we lowered our sights from Minor Peak and riffled through the guidebook for something less expeditionary. At 3.30am the next day, we started out for D-Face on Yatsumine Ridge. This was half an hour later than a couple in the next tent, who were bound for a much longer route, the “Chinne” (so-called for the “Zinne” in the Italian Dolomites) on the far side of the mountain.

A so-far flawless summer had fallen apart in the last 24 hours. It was now cool enough for pile jackets. As the sun started to gild the mountaintops, we were half-way up Chojiro-dani, a steep, snow-filled side valley named after one of the guides who first explored the mountain. A gentle-looking mackerel sky filling the breche above us seemed to promise stable autumn weather. In fact, a slap in the face with a wet fish would have been a more accurate prognosis. But, to save weight, Fujii-san decided to leave his rain jacket in the rocks below the face, to be picked up on our way back.

We roped up on a rock platform underneath the face and inspected the menu. On the right was the so-called Bernina route. A euphonious name – didn’t it have something to do with a sewing machine? – but the line it took up a slimy corner failed to appeal. We opted for the Toyama University route, put up, no doubt, by one of those elite climbing associations mentioned by Fukada. This wends its way leftwards out onto the slab’s aery edge. I took the first pitch, which was straightforward, and Fujii-san led over into a stretch of looser rock. Then came the crux pitch, which, as the guidebook says, ‘cunningly finds its way through a series of overhangs’. One may surmise, though the guidebook stays mum on the point, that a way exists through those overhangs because they have collapsed in those places, undermined by rotten rock. This mild horror show is followed by an almost vertical section where I resorted to an A-zero move on rusty pitons to make the belay ledge. 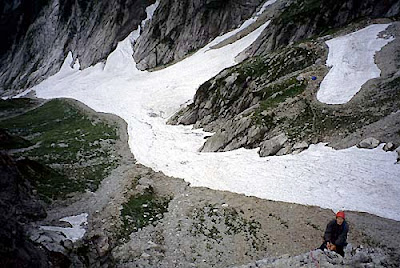 The next pitches were delightful. We wafted upwards on easy Grade III/IV rock at the very edge of this giant rock tooth. A wealth of “gubba” (thank-god) holds sped us on our way, varied by the odd creeping pine that offered its branches as an alternative to the rough granite angles. We hardly noticed the clouds massing overhead until raindrops started to spot the slab. The descent involved a long abseil back into the gully. Just as we crammed the ropes and gear into our packs, the light drizzle turned into a downpour. I whipped out my nylon cagoule but Fujii-san, alas, was still lacking his jacket. Only then did we remember that he’d put this vital item into a black plastic bag and lodged it in an extensive field of black boulders.

As the rain sluiced down from the highest and coldest layers of a vast cumulonimbus, I was tempted to run for home and leave him to hunt the thimble. My own jacket was merely slowing the raindrops rather than stopping them. Then I noticed the elusive black bag right at my feet. After insulating Fujii-san from the elements, we set off back to camp, both drenched. Mrs Fujii’s tent, fortunately, had stood up to the deluge and so we were able to fester comfortably while drying out.

The afternoon was fine for a while as the storm drifted off to the east, showing off its spectacular cloud-towers. Before darkness fell, I cooked a dinner of what claimed to be readymade couscous salad, arab-style. It tasted like blotting paper marinaded in battery acid. Fujii-san was polite about it but declined a second helping. Still no sign of the Chinne team, I observed as we reached the dessert course. In our warm tent, we could imagine the icy rain sluicing down as they tackled the crux pitch of this climb, a Grade V A-zero pinnacle reminiscent of its Dolomitic original. “Schadenfreude,” said Fujii-san, not for the first time amazing me with the reach of his foreign-language vocabulary, as well as the order he used it in.

More Hyakumeizan photos at: One Hundred Mountains of Japan images
Posted by Project Hyakumeizan at 9:12 PM

That's a great phrase, "the tiltyard of alpinism", and one that does Tsurugi proud. I loved my trip up there - a very much easier route than yours, but I was blessed with both beautiful weather and a completely deserted mountain. It's truly one heck of a mountain.