“Here is God’s plenty,” declared the critic and poet John Dryden. He was speaking of Chaucer’s Canterbury Tales and their procession of sharply delineated characters. But much the same could be said of “One Hundred Mountains of Japan”, with its colourful gallery of monks and mountaineers, writers and botanists, soldiers and surveyors. 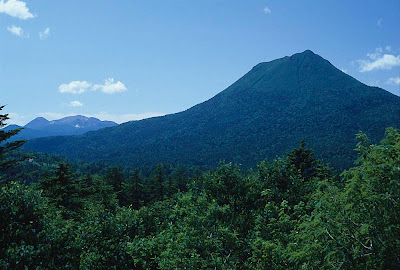 Some of these pioneers weave through the book rather as, in life, they forced a way through unknown peaks and passes. One such is Matsuura Takeshirō, who journeyed through the wilds of Ezo (later Hokkaidō) between 1845 and 1858, laying the foundations for the later development of the northern island. We first meet him as a 27-year-old explorer, composing a poem about Akan-dake (Chapter 4) after his first ascent of this shapely 1,503-metre volcano:-

A few pages later, he is responsible for the naming of a future city in the vicinity of Tokachi-dake (chapter 7). Here is how Hyakumeizan author Fukada Kyūya tells the story: When Matsuura Takeshirō first visited this place and made as if to drink from this river, a local Ainu cried out "Piei, piei!" to stop him. "Piei" meant that the water was greasy from the sulphuric effusions of Tokachi-dake. The name Biei stems from this incident. The town was founded in 1896 (Meiji 29), and its name was originally written with the characters for beautiful (美) and for excellent (英). The latter character is also used to represent "England", however, and, in the wake of some chauvinistic thinking, it was replaced with a rather more difficult ideograph …

In alpinistic terms, Matsuura’s greatest feat was the mid-winter ascent of Yōteizan, a Fuji-like stratovolcano of 1,893 metres to the south of Sapporo. He set up a shrine at the mountain's foot on February 2, 1858 and then addressed himself to the ascent:

On the evening of February 3, he stopped at the second station, but could not sleep for the cold of this winter night. Continuing on his way early the next morning, he watched the sun rise from the fourth station. At the sixth station, he climbed above the tree line. At the eighth, the slope steepened and in the afternoon of that day, he at last reached the summit … Taking place as it did more than a century ago, this mid-winter ascent of a mountain almost 1,900 metres high was a feat of amazing audacity. In subsequent summers, the landmark peak was presumably climbed by a number of local people but it was not attempted again in winter until 1912 (Meiji 45) when the Austrian military envoy Theodor von Lerch, the father of skiing in Japan, set off for the peak on skis. However, he did not reach the top.

Fukada next runs across Matsuura’s trail in the Kansai region, when he discovers a monument to him on the wooded summit of Ōdai-ga-hara-yama (Chapter 90). As Matsuura grew older, he confined his travels to the home islands, pioneering a route up Ōdai-ga-hara-yama in Meiji 18 (1885).

On February 4, 1888, on his way to climb the mountain once again, Takeshirō collapsed and died of a brain haemorrhage. He was seventy years old. In his latter years, he had built himself a tiny but elegant retreat. To an account of why he built the little scriptorium he added the request that, when he died, its materials should become his funeral pyre and the ashes scattered on Ōdai-ga-hara-yama. So intense was Takeshirō's devotion to this place …

In retrospect, there is a sad irony in this passage. Less than a decade after publishing these words, their author, like Matsuura, died of a brain haemorrhage while climbing a long-sought mountain. Thanks to Fukada's writings, though, the character of the great explorer, and those of a hundred other pioneers, will live for ever in the pages of Nihon Hyakumeizan.

Nihon Hyakumeizan by Fukada Kyūya, in a forthcoming translation as “One Hundred Mountains of Japan”
Posted by Project Hyakumeizan at 9:43 PM

How easy we have it nowadays. Buses to the trailhead, marked paths, good maps and well-stocked huts. I'm at once envious of the unspoilt wilderness those pioneers experienced, amazed at their abilities, and not a little thankful for modern conveniences!

Thanks for the comment, Chris - yes, this is one of the many charms of Nihon Hyakumeizan - the portraits of the pioneers who roamed through regions that were all but unexplored. I'll post some more such portraits soon... In some respects, though, the Japan outdoors is still pretty remote. It's said that, in Switzerland, a rescue helicopter can get to any place in the country within 15-20 minutes. That kind of instant rescue is certainly not on tap if you get into trouble in the middle of the Kurobe region, for example ....