Travelogue continued: a serendipitously discovered chart confirms that Rishiri is a volcano that stands way out of line

13 November: A rugged individualist. That’s the character that comes irresistibly to mind as I watch Rishiri recede in the wake of the mid-morning ferry back to Wakkanai. But, hold on, I remind myself as I duck out of the battering wind on the boat deck, a volcano is just a pile of slag. Only people can be individualists, rugged or otherwise. 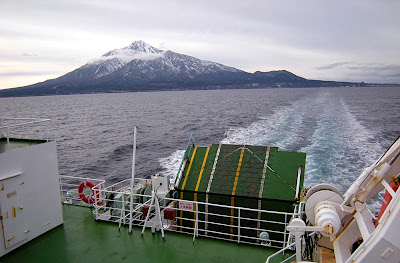 The ferry docks at Wakkanai several hours before the train is due to leave. There is time to wander through the town. Is it just me, or is a subtle sense of humour at work here? There’s the King Tyranno pachinko parlour (although the real King Tyranno around here is the north wind) … 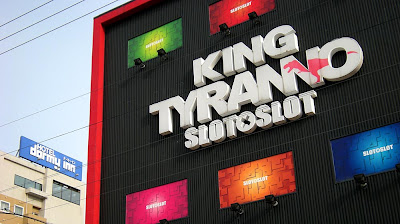 … and the three good-luck cats lined up in the window of the national lottery office. 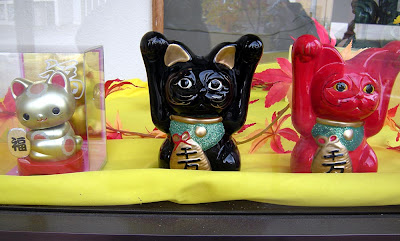 Then I discover a bookshop. Flicking through a tome on the volcanoes of Hokkaido, I learn that Rishiri is still considered to be potentially active, even though its most recent eruptions took place 8,000 years ago. 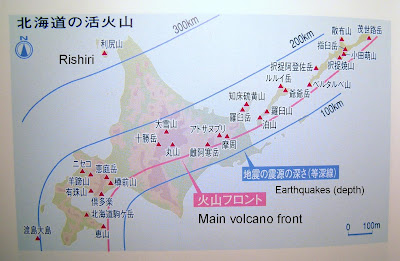 What really catches my eye, though, is the map* showing the locations of Hokkaido’s volcanoes. All but one are lined up neatly on a so-called volcanic front running approximately south-west to north-east. They stand exactly where the savants expect them to be, like grade-school children rising obediently to attention in a classroom.

Rishiri alone stands way out of line, erupting from mid-ocean hundreds of kilometres behind all the others. I feel relieved; Rishiri is truly a non-conformist among Japanese volcanoes. A rugged individualist one might say …. 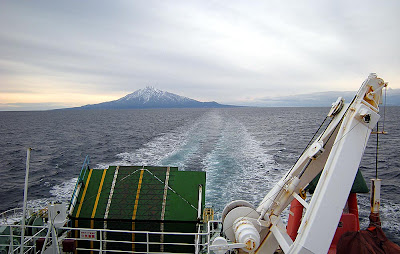 A rugged individualist indeed, and oh so shy.

Glad you could finally make it to the top AND experience a rare view from the ferry.