Men in a hurry

The mountaineers who saw out Honshu's golden age of mountain exploration 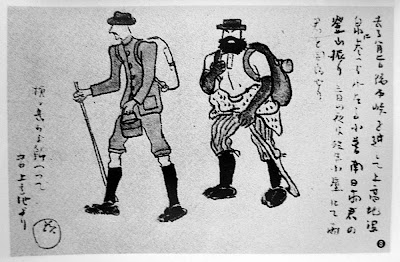 Permit me to introduce Messrs Kogure and Tanabe. They look like men in a hurry, and well they might - since the Japan Alpine Club was formed, just eight years ago, most of Honshu's high mountains have already been explored. And soon the surveyors of the Army General Staff will issue the first modern maps of the mountains, banishing the thrill of discovery forever. 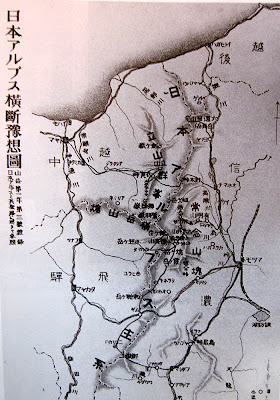 So now is a last chance to grab a piece of the action. This is August 1913, and the duo are setting out from Kamikochi to walk until they run out of mountain. They'll press north along the backbone of the Japan Alps, past Yari and over Tateyama, ever northwards, until the ridges falter away under them into the Japan Sea. For thirteen days, they'll follow paths as faint as dreams, or none at all, through the creeping pine and the drifting clouds.

Their conversation should be as elevated as the terrain. Both are Tokyo University men, yet both were brought up in remote villages that still adhered to the old mountain faiths. In this, they recapitulate, in their own experience, Japan's shift from traditional mountain worship to modern alpinism.

Kogure, we've met before. As for Tanabe, a recent graduate in English Literature, he's a devotee of Wordsworth and Walter Pater. Perhaps these high-mountain expeditions help him burn with that hard, gem-like flame. Although, as he's slight of build, he also complains about the heavy loads that they oblige him to carry. 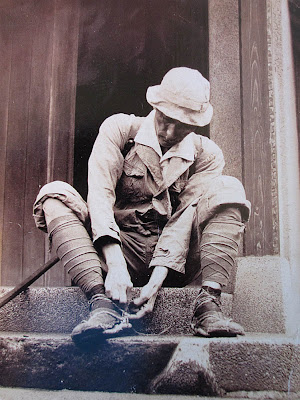 Tanabe Jūji (above) was born in 1874, in a village near Toyama where people still worshipped the mountain deity of nearby Tateyama. However, Tanabe was frail as a child and didn't apparently go on pilgrimage. He went up to Tokyo Imperial University in 1905, where he got to know Kogure Ritarō and acquired a taste for travel and mountain literature.

His own mountain career got under way when he graduated from Todai, started on a teaching career, and moved into the same lodging house as Kogure. They made ambitious traverses the length and breadth of the Northern Alps, but are most often remembered for their explorations of Kogure's native hills, the forested Chichibu range near Tokyo. The aspirant painter Nakamura Seitaro, then still a student, joined them on many of these forays.

The Kogure-Tanabe partnership lasted eleven years - seeing out the end of what Kojima Usui called Japan's golden age of mountain exploration. Tanabe wrote up these mountain travels as "Pilgrimage to the Japan Alps and Chichibu" published in 1919. The title gave him some misgivings: "At present, there's no suitable word to describe the mountain ranges now collectively referred to as the 'Japan Alps'. Alas, though, I can't at the moment think of a better one." 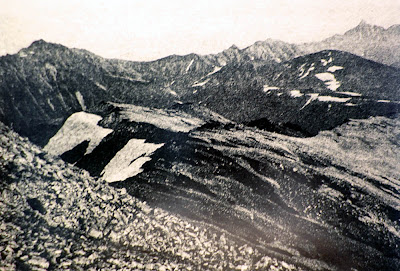 Actually, Tanabe's problem with the Japan Alps went deeper than a purist's objection to a katakana loanword. At about this time, he'd started to feel the need for a change in his mountain journeys. Whatever it was that he sought, it was more likely to be found among the wooded ridges and gorges of the Chichibu mountains, where the hoary old trees were festooned with Spanish moss, than on the austere heights of the Japan Alps.

He alludes to this change of heart in the preface to his book. "It seems to me that, rather than introducing the Japan Alps, I've put most of my effort into describing the Chichibu range." Later, in an essay entitled "Thoughts about Mountains", he explained his new thinking as follows:

We don't look at mountains in the way that romantic or symbolist poets do, using them as mere subjective scaffolding in order to sing about themselves. Rather, we look at mountains objectively, seeking out points of congruence between them and ourselves. This is by far the most free, the most natural way of looking at them, and you can appreciate the mountain's character as a mountain. This is how the English poet Wordsworth approached all of nature. He strove to see nature objectively and, more than any other poet, he was capable of submerging himself in nature. And it is only through this powerful serenity of contemplation can we become one with the mountains.

Getting married may also have helped to change Tanabe's life. So might his appointment, in 1922, to a professorship at Hosei University. For whatever reason, he was no longer a man in a hurry; peak-bagging and mountain exploration had lost their meaning for him. Instead, he was more inclined to wander, alone and contemplatively, over passes and along old roads such as the Kiso Kaido or Basho's route to the deep north, less like a modern mountaineer than an itinerant haiku poet.

He didn't entirely turn his back on the high mountains. He became head of Hosei University's mountaineering club and even took up skiing. Yet something was missing in this modern age, when every mountain had long since been mapped and named. Nothing, it seemed, could bring back the splendour of those youthful ridgeways to the Japan Sea.

When I was at school in Tōkyō, the Jōetsu mountains were less explored than they are today and the Northern Alps still fairly inaccessible. So I did most of my mountaineering in Oku-Chichibu, using Tanabe Jūji's "Pilgrimage to the Japan Alps and Chichibu" and the Chichibu issue of the "Sangaku" journal that I found in a second-hand bookshop. In those days, there were few paths, mountain huts were thin on the ground, and signposts almost non-existent. With rice and soya beans, a hatchet and a saw in our packs, we would light out for the empty mountains. If we had two or three free days, we preferred to spend them walking around the mountains of Chichibu, not in Tōkyō.

Quotation from Tanabe's essay comes from Miyashita Keizo's Nihon Arupusu: Mitate no Bunkashi, a book on the Japanese interpretation and importation of the Alps published in 1997.

Photos copyright of Yama to Keikoku illustrated history of Japanese mountaineering (目で見る日本登山史 by 川崎吉光、山と渓谷社).
Posted by Project Hyakumeizan at 7:59 PM

Tony: many thanks for your enthusiasm and support. Alas, it's a bit premature to pre-order the book just yet. There's a few preliminaries, such as arranging rights, and writing a longer introduction to work through. But we'll get there. Will post updates as we go....

Understood. Looking forwards to the book and the continued blog posts. Thanks for inspiring :-) Tony

It's been awhile since I ambled joyfully among your fine prose, PH, but it's a welcome feeling to be back. There's much catching up to do but tonight I am going to seek out your Hakusan post which I have been meaning to read for two months or more. But I had to read through this post here as well and well worth it it was. With two children now, I too may be kept away from the Japan Alps for some time and in fact, my last three outings included two to Ryogamisan in the Chichibu Mountains.

Welcome to One Hundred Mountains again, Peter, and I trust you found Hakusan to your liking. As to the lack of leisure to explore these noble mountains, I offer my commiserations. Also one consolation: however little vacation we wage slaves have, it is almost certainly more than the pioneer mountaineers of the Meiji period had. Kojima Usui, founder of the JAC, could only take the inside of two weeks a year, I believe. Yet, from that, he managed to spin out four volumes of writing about the Japan Alps alone. How did they do it ...?