“Except for some literary society, I know of no other association that has more poets and writers than ours,” said Kojima Usui about the Sangaku-kai, soon after he founded Japan’s first alpine club. Perhaps he should have mentioned painters too. There was at least one in the Sangaku-kai. Nakamura Seitaro joined the club just two years after its inauguration. That was in 1907, the same year that he started as a student of the Tokyo Institute for Business Training (商法講習所|), the predecessor of today's Hitotsubashi University. 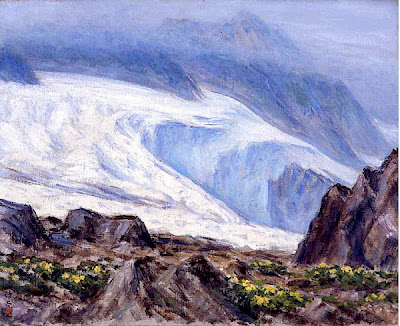 Nakamura was born in 1888, the only son of a couple who ran a shop selling yukata. He got his first training as an artist by practising the patterns used to dye the linen. While still at school, he organised a group of friends to go hill-walking. Joining the Sangaku-kai would allow him to tackle bigger mountains and perhaps even find new ways up them. 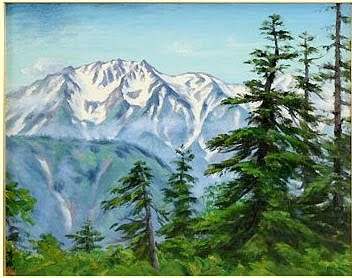 For Nakamura was fortunate enough to start his climbing career during Japan's “golden age” of mountain exploration, when mountaineers had to find their own way without the help of modern maps. In 1909, he joined Kojima on a traverse of the Southern Japan Alps. Unable to splurge on expensive foreign kit, Nakamura got a local smithy to bash out an alpenstock. This may have been Japan’s first domestically produced ice tool.

Atop Warusawadake the party discovered that pilgrims had been there before them. Recorded in the club’s journal, Sangaku, the incident was later quoted in Nihon Hyakumeizan (“One Hundred Mountains of Japan”):

On the summit, they found signs that others had been there before them. Three shrines of unvarnished wood stood there and a rusted iron banner leaned into a rocky niche. And nearby, the pilgrims had left scattered on the ground wooden tablets inscribed with the name of the deity Arakawa Daimyōjin. 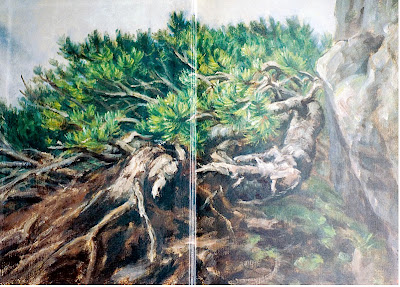 In the late autumn of 1911, Nakamura climbed Saru-ga-dake (2,629m), shod in newfangled crampons (at that time, they were still called “kana-kanjiki” – iron snowshoes). This was the first time that a peak in the Southern Alps had been tackled in winter conditions.

In 1913, he joined Kogure Ritaro and Tanabe Jūji for part of their epoch-making traverse from Yarigatake in central Honshu all the way northwards to the Japan Sea. In 1917, he climbed volcanoes on Java and the Celebes and in 1919 he again teamed up with Kogure for an exploration of the Kurobe valley – they got as far as Ike-no-daira in Sen'nin-dani before porter troubles and lack of food forced them to cut short the trip.

Although Nakamura had already decided to become an artist, he left his painting materials at home for these youthful expeditions. From now on, though, he went into the mountains specifically to paint and his works started to appear in exhibitions and in the pages of Sangaku. In 1936, he founded the Japan Association for Mountain Art and exhibited seven paintings at its inaugural exhibition, including one of summer snow on Tateyama (below). He died in 1967, at the age of 79. 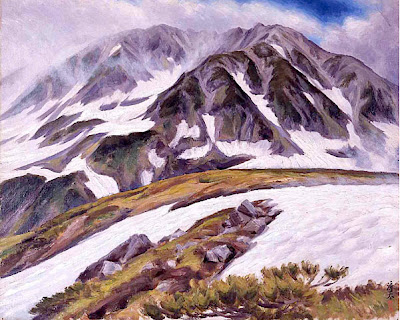 Inevitably for a Sangaku-kai member, Nakamura was also a writer. Perhaps inspired by that youthful encounter with pilgrims’ relics on Warusawadake, he published three books on Japan’s mountain religions. Dealing as they did with the mystic aspect of the mountain world, these studies were of a piece with his paintings. The unexplored mountains of his golden age were “vast, mysterious, sublime”, Nakamura wrote, “as if wrapped in some purple cloud, enshrined in the inner recesses of my heart”.

Quotation from Nihon Hyakumeizan from the forthcoming translation as One Hundred Mountains of Japan.

Images of Nakamura's paintings are by courtesy of this website. Paintings show (from top to bottom) the snowfield on Yarigatake; glacial corries on Tateyama; a study of a creeping pine (haimatsu); summer snow on Tateyama, and an edelweiss.
Posted by Project Hyakumeizan at 7:56 PM

Thanks a lot for this very interesting post! I didn't know about Nakamura Seitaro well. I have only seen some of his paintings before in magazines. I love the fourth one! The color purple is so lovely. What interests me is that Seitaro was a son of a couple who ran a shop selling yukata. His background reminds me of those of other painters: Ogata brothers' (Korin and Kenzan)father ran a Kimono fabrics shop in Kyoto, Hasegawa Tohaku's foster father was a dyer and Utagawa Kuniyoshi's (cat painter) father was a dyer too. Kimonos, including yukata, must have had a great influence on them.