The professor of clouds

A wet weekend in Switzerland prompted a visit to a show of cloud photography at the Winterthur Fotomuseum. My eye was caught by a film loop of speeded-up clouds. In fact, the clouds were flowing past a strangely familiar cone. In flickering, sparking black-and-white footage, winter stratus streamed over the peak, lenticular clouds nibbled at the clear skies of spring, and a summer cumulus boiled up over the scorching southern flanks… 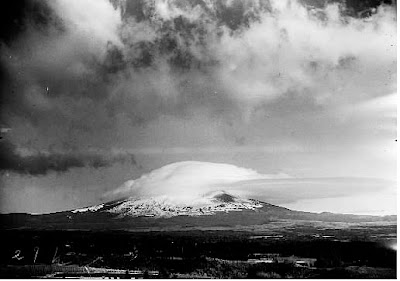 I looked at the programme. Apparently, the video loop was compiled from film clips made in the early 1930s by Abe Masanao (1891-1966). It seems that this so-called Professor of Clouds (雲博士) devoted much of his life to recording the clouds and wind currents around Japan’s most famous mountain. 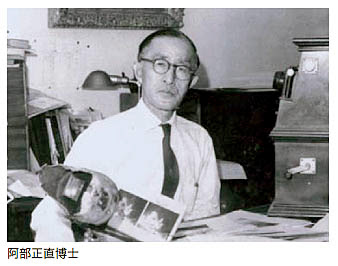 After completing his studies at Tokyo University’s science faculty, he set up an observatory in 1927 near Gotenba, on Mt Fuji’s southern slopes. Then, equipping it with all manner of meteorological gear, much of it purchased on journeys abroad, he spent the next nineteen years documenting every nuance of the atmosphere's behaviour over and around the sacred peak. 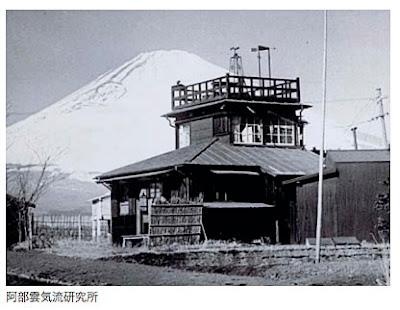 Abe was particularly fascinated by Fuji’s cap clouds. Usually heralding the approach of a front, these wave formations hover numinously over the mountaintop, shape-shifting by the minute. Abe recorded them in volume after volume of still photos, using trigonometry to plot their ground track and sometimes using cameras separated by several kilometers to make stereo images. 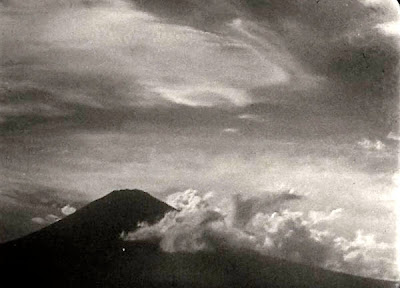 But by far the best way to capture such clouds was in time-lapse movies, a technique so novel that he had to invent his own camera. The medium, he thought, suited the subject. Lenticular clouds look as if they are stationary yet, in reality, they consist of water droplets that blow ceaselessly through them. In a similar but opposite way, a host of static pictures, flickering past, creates the illusion of a moving image on a cinema screen. 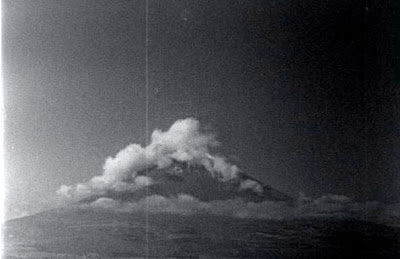 Abe doesn’t seem to have come up with an all-embracing theory of clouds. Rather, he saw his role as setting down the phenomena as completely as possible, so that others could use the data as they wished. In 1937, the Central Meteorological Observatory (the precursor of today’s meterological agency) acknowledged his efforts when it recognized his institute as an affiliate.

After the war, Abe moved to Kamakura, far from Mt Fuji, leaving his observatory as a kind of museum. Following his death, the Gotenba city authorities took the instruments and records into storage, where they remain today. Meanwhile, the observatory fell into disrepair. The trees around it have grown so high that they hide all but Fuji's summit –and those tantalising, mysterious clouds, perpetually shape-shifting.

Vielen Dank to Hellmut Völter for posting the video of Abe's film clips (see first link above) so that we can all admire and enjoy them.

Top three photos are from the exhibition website of Fuji-san no Juku no Mori (富士山樹空の森), a recently opened theme park at Gotenba. Not sure if the exhibition is permanent or temporary or whether it includes the instruments and publications that the Gotenba city authorities took into storage after Abe-sensei's death. Perhaps somebody closer to the spot can find out? 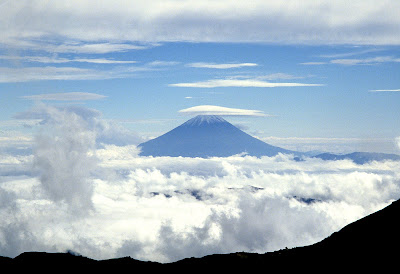 Posted by Project Hyakumeizan at 6:47 PM

What a fascinating essay! It's always amazing what people have done in the quiet of their own lives that few other people remember or celebrate. He must have felt great joy and personal satisfaction in pursuing that legacy. It's a shame that his research facility has fallen into disrepair.

Yet another intersting post on Fuji on a subject I have never considered. Thanks too for the film clip link. The wind direction(s) on some of the clips is mind boggling, not sure I'd ever like to partake in any aviation based activities around Fuji.

Butuki: my source for the story was published in 1992, since when much may have happened. Back then, I think it was safe to say that Abe's legacy was more or less forgotten. But the very fact that his film(s) have turned up on exhibition in Switzerland this winter shows that people are once again taking an interest in him.

Iain: yep, aviating too close to Fuji can be fatal. A few months after Abe's death in 1966, turbulence brought down a BOAC airliner near Gotenba. And, some time in the 1990s, a Cessna was sucked down into the crater. Even the Warthogs (see "Journey to the centre of Mt Fuji") tend to keep a respectful distance...

1) October and November had characteristically large snowfall amounts. Perhaps this is the way it used to be.

Wes: good that you watched the video too. You raise a most interesting question/idea: Mt Fuji as an indicator of climate change. Of course, there are comprehensive records of the usual measurements - rainfall, temperature etc going back many decades. But I believe that the snowline, depth of snow etc have also been monitored and documented. Would be very interesting to see if anybody has compiled such records into some easily understood form - maybe even a video? Again, somebody closer to the action might be able to help...

I could loose hours watching that footage.
My first reaction was it was an interesting culture artefact (science is cultural after all) that depicts Mt Fuji in all seasons and weather conditions – of course this was its scientific drive, and noting Wes’s comments its contemporary scientific potential as well. However in my trawling of artistic depictions of Mt Fuji there is very little in the way of artworks/projects that observe natural phenomena i.e. that treat Mt Fuji not as an icon or a sign but try to depict the mountain as part of a greater set of natural processes. I think the mountains scale has something to do with this but perhaps Yukio Ohyama’s photos come close? I probably just expressed a complex idea too briefly, and should really write a longer post on this, so would welcome any comments or suggestions of artworks.

It’s interesting that the cloud exhibition is on at the same time as Bernd and Hilla Becher, their very ‘cool’ documentary aesthetic creates a connection with the scientific data photos. Perhaps Abe Masanao project was so idiosyncratic that from a contemporary perspective it now seems like an artwork.

Another historical example of the observation of clouds over Mt Fiji is the scroll by Minamoto Sadayoshi held in the British Museum. My post here: http://magneticglimpses.blogspot.com/2011/04/in-all-seasons.html

The climate has definitely changed. When I was a boy in Japan in the late 60's and throughout the 70's the rainy season almost always started in late May and not the late June that it does now. The first cicadas started singing around the end of June, and not, as last year, in late July.

I also lived on the flanks of Mt. Fuji (in Susono, Shizuoka) twice, once in 1984 and then again for five years between 1991 and 1995. I often walked up and around Fuji throughout the year. Over the years the snows have changed quite dramatically, growing less buy the year. I saw on the news that snows on Mt. Fuji were unusually low in October last year, though I'm not sure about now with the heavy snowfalls of the last week.

It is a unique mountain... sublime and arresting when you step back, but something desolate and forlorn when you are up close, even when there are thousands of people on it. Walking the lower slopes in winter, especially from the southeastern side where the military base is located, can seem like you've landed on some hostile alternative planet.

Birdmonkey: natural processes as art ... I think you are onto something here. In fact, NHK (whether consciously or not) picked up on Abe-sensei's hint and (within the last 10 years) produced a breath-taking hour-long documentary of time-lapse footage showing the clouds and cloud-shadows racing over Fuji in all four seasons. I think there was no commentary: the film didn't need one. Wonder if somebody can track it down? It ought to get a wider audience (ie outside Japan too).

And thanks for the reminder about Minamoto Sadayoshi. There may be a good story there too...

Butuki: many thanks for your on-the-spot climate change observations. Mmm, wonder if anybody has documented that shift in snow-levels on Mt Fuji...?

I'm hoping to write to something on Minamoto Sadayoshi after Easter.