The idea of a "meizan" - sometimes translated as "famous mountain" - didn't start with Fukada Kyūya. Indeed, the Hyakumeizan author went to some lengths to disclaim originality. In the afterword to his One Hundred Mountains of Japan, he points out that several authorities had previously drawn up lists of notable peaks around Japan. 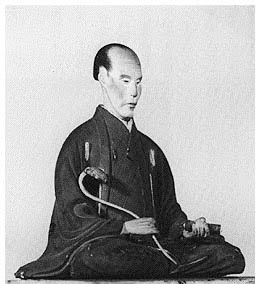 According to Fukada, the first to advance a theory of famous mountains was Tachibana Nankei (1753-1805), a famous travel writer. This "Meizanron" is developed in Tachibana's Tōyuki, an account of the doctor's travels through eastern and northern Japan.

Born into a samurai family in Ise province, Tachibana (left) studied medicine in Kyoto and established himself there as a doctor. He must have gained some prominence in his profession, being appointed in 1786 as an Imperial physician and attending the Emperor Kōkaku's investiture the following year.

Today, Tachibana is remembered mainly for his travel journals. At the age of 30, in the early 1780s, he made a journey to western Japan and Kyushu, meeting with representatives of the Dutch East India Company at Nagasaki. As a man of science, he was impressed by what he saw of European optical instruments and maps.

In 1785, Tachibana set off on another long journey, this time to the eastern and north-eastern provinces. He even ventured into southern reaches of Ezo, the northern island that would later be known as Hokkaidō. Ten years later, he published accounts of his travels as the Saiyūki ("Journey to the West") and the Tōyūki ("Journey to the East"). His lively and opinionated style quickly won his books a wide readership. 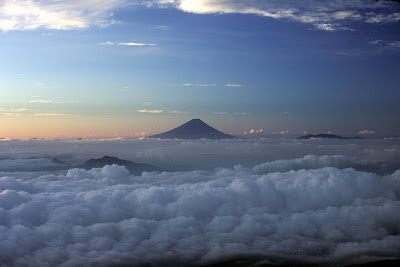 It is in the fifth volume of the Saiyūki that Tachibana puts forward his "Theory of famous mountains". Everybody, he observes, says their own local mountains are the best in the world, yet this is hard to credit. "And, as I have travelled everywhere under heaven," he continues, "I thought I would attempt a fair discussion of this matter."

Tachibana's listing has stood the test of time. Most of these mountains also appear in Fukada's one hundred summits. Yet this Meizanron may be as significant for what it omits as for what it contains. Notably absent is a discussion of the term "Meizan". Presumably, Tachibana felt that the word was so commonplace that it needed no definition. Then as now, the prefix "mei-" can be applied to anything notable or noteworthy, from a fine wine (meishū) to a particularly appealing hot spring (meiyu).

That said, Tachibana does drop some hints as to what might make a mountain notable. His first three - Fuji, Hakusan and Tateyama - have been known for centuries as the Sanreizan, or the Three Holy Mountains of Japan - an association that goes back at least as far as the early Edo era. Quite apart from their lofty altitudes and impressive forms, these mountains are revered as the centres of ancient religious traditions.

In a later paragraph of his Meizanron, Tachibana asks himself if Hagurosan and Yudonoyama should be included in his list of Meizan. Like the Sanreizan, these satellite peaks of the extinct volcano Gassan are religious mountains: "a place where the Buddha and the gods appear, and many people pay homage to them". Yet, and here a note of doubt creeps in, their height is "extremely low".

Although they are implied rather than stated, Tachibana's criteria for Meizan status are strikingly similar to Fukada's. To qualify for Tachibana's list, a mountain must have character and it must have history. And, ideally, it must be high, although neither Tachibana nor Fukada are dogmatic about a minimum altitude: both authors include lowly Tsukuba and Kaimon in their lists, neither of which tops 1,000 metres.

Yet height and stature do matter. Tateyama, says Tachibana, is "high and precipitous and picturesque". As for Hakusan, its perpetual snows make it look like a "gemstone cut from pure whiteness". Other mountains distinguished by their good form - meaning that they resemble Mt Fuji - include Chōkaisan, Gassan, Iwakisan, Iwawashiyama, Hikosan, and Kaimondake. Lastly, there is the southern volcano Sakurajima, surrounded on all sides by the sea, "like an incense burner set on a blue mat". Other Meizan may exist, Tachibana concedes, but he has discussed here only those that he has personally laid eyes on.

Next in this series: Tani Buncho, the gentleman painter who drew up the first all-Japan list of famous mountains.

Samizdat translation of Tachibana's Meizanron (thanks, Sensei!).
Posted by Project Hyakumeizan at 8:56 PM

Also as distance travellers, Saigyo and Basho may have had their own ideas about meizan, too, I wondered. But, their minds may have been more on the way their own "kokoro (heart)" were feeling in those beautiful places on their journey...

Intersting article, I`m looking forward to the next instalment.