We would have been amazed, Tim and I, if we'd known that folks once doubted whether Japan had "Alps". I mean, what could be more alpine than that dome floating above us, blindingly white, like a miniature Mt Blanc? Or that arete whip-sawing its way down to this snowy knife-edge … 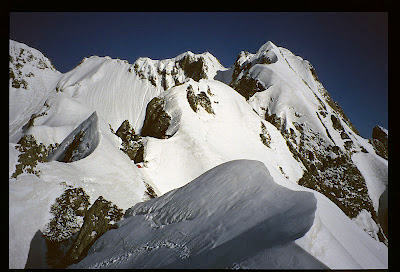 Ah yes, the knife-edge ridge we'd just paused on. Something seemed to be troubling Tim. "It's the rope," he said. "Surely, it should be shorter." We had a few metres out, enough - so I thought - should one of us fall, to give the other an extra split-second to save our lives by leaping off the opposite side of the ridge. "Isn't it OK as it is?" I asked, and on we went. 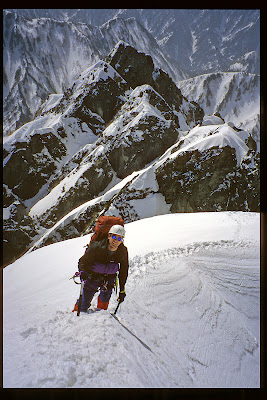 Endless debates swirl about the topic of correct comportment on sharp ridges. Some go roped. Others dispense with the rope altogether, arguing that it serves no purpose except to drag a second victim to his death. But we didn't even discuss the no-rope option. Didn't some Alpine Club geezer say that a man who climbed without would net a salmon or shoot a fox? 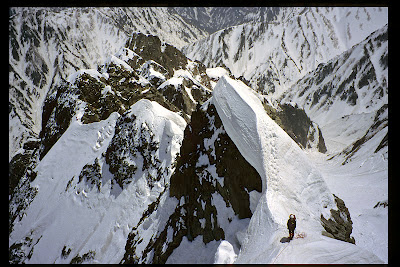 Anyway, we weren't going to fall off. The snow was crisp and, as for the weather, Golden Week - Japan's late-spring series of public holidays - was living up to its name. After climbing a snow ridge on Shirouma the previous weekend, we'd decided to follow up with Yatsu-mine on Tsurugi, an altogether more rugged proposition.

So we'd hiked in from Tateyama two days ago and pitched our tent in Tsurugi-sawa on snow stained yellow by the dust that drifts in from China on the spring winds. Although we'd left the cherry trees blooming at the mountain's foot, up here, winter was making a convincing last stand. A snow shower pattered onto our flysheet next morning, keeping us tent-bound. Snow ptarmigans croaked in the distance as I snoozed and Tim read an alarmingly graphic book about a slave revolt. At noon, we switched on our radio and heard the NHK announcer promising us a "satsuki-bare" tomorrow – a perfect May day. 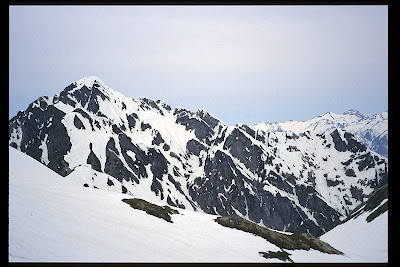 NHK was as good as her word. On May 3, well rested, we were away well before dawn. Perhaps too early; wrapped in the Stygian blackness of Tsurugi-sawa, we walked past the entrance to Chōjirō-dani and had to retrace our steps. By the time it was light enough to switch off our head torches, we were already climbing the snow ramp towards the ridge, high above the gully. The angle was steep and we made sure of every step by driving our axe-shafts into the snow.

At 6am, we climbed onto the col between Peaks Two and Three. From here, we could see a serried array of gendarmes and towers blocking our way to the summit. Yatsu-mine was dubbed by Uji Chōjirō himself – the guide who led the government surveyors on the first modern ascent of Tsurugi in 1907. Whether the ridge really does have eight peaks, as the name suggests, is uncertain. Right now, the tossing crests gleamed so brightly in the spring sun - yesterday's fresh snow had covered up the Chinese dust - that we could hardly count them. Hastily, we put on our sunglasses. 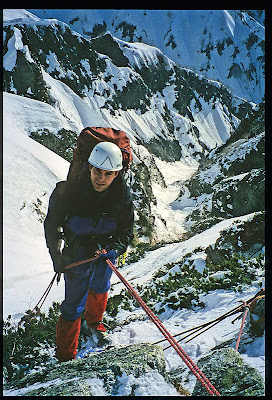 A short climb up a snowy crest took us to our first abseil, down a notch in the ridge. I think it was on the ensuing traverse that Tim raised the question of the rope. He was right, by the way - in such places, the authorities advise short-roping or using none at all. Then a second abseil, from Peak Four, took us into the camp site of a party of four, who were just packing up after a night on the ridge. 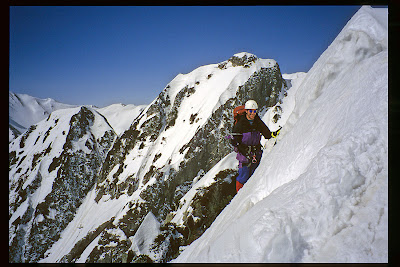 A longer ramp now took us up to a spire-like rock pinnacle. From here, we took a moment to enjoy what guidebooks like to call a 'magnificent position', with views south to the spire of Yari sixty kilometres away. At our feet, the great sweep of snowy Tsurugi-sawa curved away, just like the alpine glacier it once was.

We didn't pause long: this climb had better be finished before the sun got too high. Two abseils on faded in-situ slings took us down to the col between Peaks Five and Six. The climb up the face of Peak Six took a steep snow-wall, but conditions were better than the previous week. 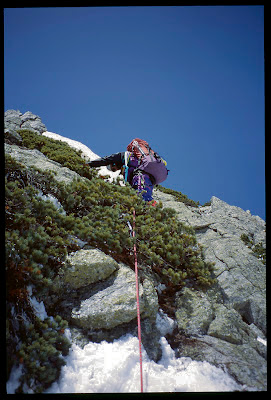 In places, there was even a sprig of creeping pine (haimatsu) to grab. (A resinous fragrance greets the nostrils as you climb through patches of this hardy and mountaineer-friendly tree.) And the air was still, which was fortunate given that much of the ridge enforces a Blondin-like poise.

Yatsu-mine must have looked even airier to its pioneers. Nothing quite like this had ever been climbed in Japan when a party from Waseda University ventured here in July 1923. Quite possibly they compared it with the Mittelegi Ridge (below) on the Eiger, which Maki Yuko (left) had climbed two years before. This was the epoch-making first ascent that galvanised student mountaineers into tackling higher, more difficult routes all over the Japan Alps. 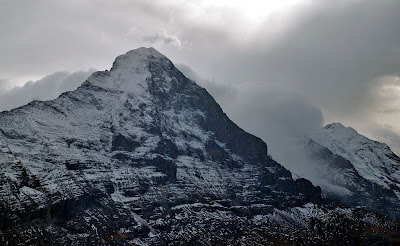 Competition was intense: a month after the Waseda crew made its reconnaissance, one from Gakushuin made the first full ascent of the ridge. In April 1934, climbers from Keio, Waseda and Gakushuin added the first snow ascent. It was in their illustrious crampon-prints that we now followed – all unwittingly, alas; we weren’t greatly into mountaineering history in those days. 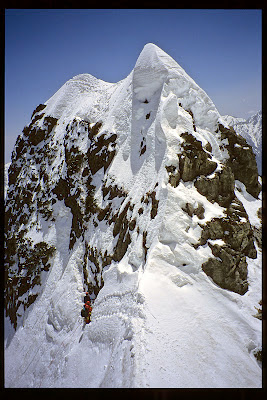 I’d been worrying all week about the abseil point from Peak Seven, described by the guidebook as difficult to find if the stance is covered by snow. And, one may surmise, even more difficult to abseil from. Fortunately, the crisp snow afforded an easy downclimb to some tapes draped around a solid boulder. I added another long loop of shock-cord as insurance, which met with the approval of another party waiting its turn to descend. That was the last abseil on the ridge itself. 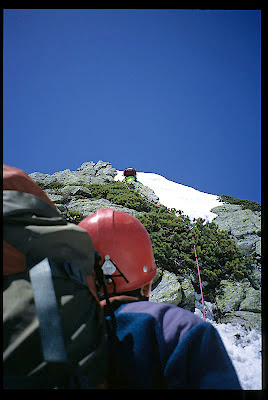 We needn't have hurried. Stood or seated about on the col below us were several other parties, all waiting to climb a narrow section of ridge beyond. The scene reminded me of a Tokyo subway poster, then current, that warned commuters against the hazards of excessive crowding. Stop the kakekomi (crush), it said. 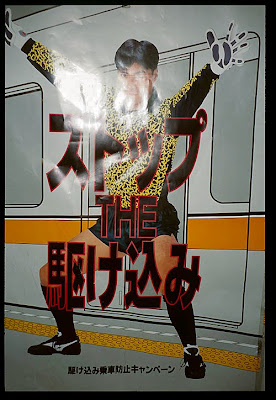 After almost an hour's rest, enforced by the kakekomi, Tim was able to lead over another patch of steeply creeping pine to put us on the final snow slope. At noon,we pulled up onto the eighth and final rock pinnacle. We hadn't finished yet - we still had to abseil down to the San-no-mado col and then climb up to the true summit of Tsurugi - but this was the end of our eightfold ridge.

As we stepped onto its final peaklet, the plains of Toyama rose into sight, and beyond them the glittering sheen of the Japan Sea. From Tsurugi, you look out westwards into a limitless blue distance - there's nothing higher until you get to the Urals. Or maybe even the Himalaya. We gazed into the blue and thought about that infinity of mountains to climb. Above our heads, alpine swifts and swallows carved the air. And now the clouds were starting to drift up from the valley. 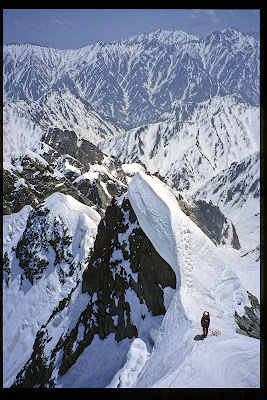 Excellent post as usual. Going back to Tokyo and work after that trip must have been tough.

Iain, thanks for reading. As for the return to Tokyo, it was really quite relaxed. After finishing the ridge, we continued on to the true summit of Tsurugi (by then wrapped in afternoon cloud). Then down Genjiro-sawa (I think) back to our tent. Next morning, back over the col to the Tateyama summit station and took the tunnel bus/ropeway system back down to Ogisawa. Next stop (in the weatherbeaten Subaru) was the Shinano-Ohmachi municipal hot spring, to soak away the exertions of the previous three days. And then, suitably mellowed out, a cruise controlled ride back down the Chuo Expressway. Yes, somewhere in the story there is likely to have been a five-hour traffic jam but, if there was, I have forgotten it ....

Your photos remind me of Allan M describing his last-ditch ice-axe arrest after slipping on Tsurugi. Now I understand that he was not exaggerating the seriousness of the situation.

Hanameizan: I hadn't heard of that incident - even to think of it makes my blood run cold. Tsurugi is no place to practise ice-axe arrests...