Remembering Tohoku - and a forgotten disaster in eighteenth-century Ezo....

Project Hyakumeizan recently received a courteous invitation from the Japanese Embassy in Bern, Switzerland, to a photo exhibition on relief and recovery efforts in north-east Japan.

At the same time, I was reading Herbert Plutschow’s A Reader on Edo Period Travel - where I stumbled across an account of an eighteenth-century tsunami disaster by the Edo-period physician and author, Tachibana Nankei (see Old masters of Meizan). In the light of last year’s tragedy, the story is especially poignant. I hope Professor Plutschow will excuse me for quoting his translation of Tachibana’s account below.

"Nankei heard from the old people with whom he was staying at Minmaya, that, twenty or thirty years before, Matsumae [in southern Hokkaido] had been flooded by a tsunami. The old people told him that the deities and Buddhas had sent warnings but that the foolish people did not heed them and that all those who lived near the beach died. 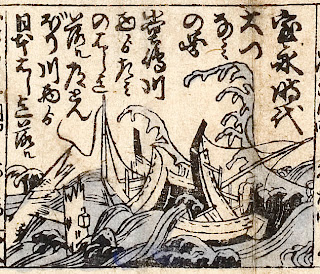 The wind was still at that time and the rain clouds had moved away into the distance, but for no apparent reason the sky clouded over again. Now and then a light appeared at night, flitting from east to west in the empty sky. As time passed, this light grew brighter and, four or five days before the tsunami, the gods flew over the empty sky even in daytime.

One god rode on a dragon, which was flying on a cloud. Still another god, dressed completely in white, rode on an animal like an elephant or a rhinocerous. Some were very large and appeared in red, some in blue, but there were also small ones. The sky was filled with these strange-looking Buddhas and deities and they all flew from east to west. We all went out to watch them. Thankful for their appearance, we prayed to them every day. It was strange to be praying to visible gods.

Four or five days passed like this and, one evening, when I looked out towards the open sea, there was something white like a snow mountain. I said: “Look out! There is something mysterious in the middle of the ocean.” This thing came nearer and nearer until it seemed as if it would flood over the whole island. Then a huge wave came. This was the tsunami. “Run for it!” Old and young, men and women, all struggling to be first, ran in utter confusion.

But in no time at all it came, swallowing all the houses, the fields, the trees and plants, as well as the animals. No one living in villages along the shore survived. I saw this from a distance. This wave came in over thousands of ri over the ocean. It was high as a cloud and, until it came near the shore, it did not even look like a wave. It came in once and it retreated once.

No one could tell what caused this. All the people said to each other in fear that the reason why the gods were flying in the clouds at the beginning was to tell people that something terrible was afoot. 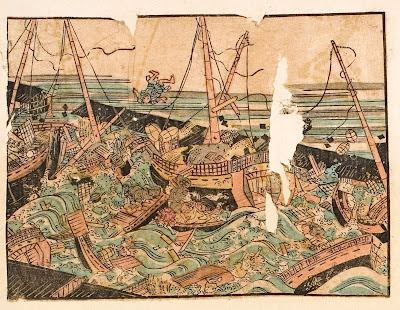 Woodprint illustrations by courtesy of University of Tokyo.
Posted by Project Hyakumeizan at 7:42 PM

A really great post that puts much in perspective, as in, Mother Nature rules. The present-day tsunami situation in Japan saddens greatly. The determination of the Japanese people, along with their amazing work ethic and moral code, inspire. Here, in Virginia, we're out of the severe tornado warning zone but in the wildfire zone. Fires burn in the southwestern part of the state. What should be a crisp day, is almost a summer day. Mother Nature is having her way for so many transgressions.

Hey, thanks for stopping by. I had begun to think you'd 'disappeared' and was very happy to see you up on the screen! I rather switched my blog's approach to my stories when I learned some had been pirated in China. So, I'm e-pubbing. "Remy Broussard's Christmas", centered about poverty and the old sharecropper system, isn't really about religion but, tongue in cheek about how the Man rules in the end. (Yep, I'm still me, LOL!) "Jacob's Birthday Party" will tackle the KKK.

Very interesting, according to wikipedia it sounds like it was in 1741 and linked to an eruption and landslide on nearby Oshima.

Kittie: indeed Mother Nature rules. As for plagiarism, I share your pain. Even the modest blogging efforts of Project Hyakumeizan have been ripped off. Guess it comes with the blogging territory. But I hope it won't deter us....

Iain: many thanks for pinning down the cause of the tsunami. Yes, that must be it. The date - 1741 - is just right for Tachibana to pick up eyewitness accounts from elderly people 40 years later. The volcanic island appears to be Oshima-Oshima, out in the northern Japan Sea, and the savants have been on its case. See this paper for example...

Another interesting read. I guess the cloud activity and references to gods in the sky were all volcanic ash related, but strange that Tachibana says they were travelling from east to west when Oshima lies to the west.

Thank you so much for reminding me of Tachibana Nankei. Your posts on him made me want to read his travel journals thoroughly! After the Hanshin Great Earthquake, it seems that our archipelago has been in a more active phase of quake-activity....(sigh)

By the way, did you know "Fuji-rekishi(フジレキシ）, a fascinating blog on Mt. Fuji? I happened to discover it and found it very good. I wonder if you know it. It specializes in Fuji-san subjects. It is written in Japanese, though.
The author of the blog must have read lots of old documents...

Mt. Fuji and religious beliefs in the blog.
http://fujinoyama.blogspot.jp/2011/10/blog-post.html

Sapphire: thank you so much for reading and also for pointing out the Fuji-rekishi blog. This looks most interesting, and I will dive in enthusiastically. Mt Fuji probably has more history than any other mountain in the world....