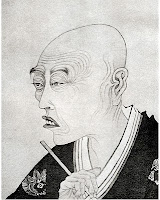 Tani Bunchō (1763-1840) is the second authority mentioned by Fukada Kyūya in the afterword to his One Hundred Mountains of Japan. The son of a well known poet, Tani studied landscape painting in a Chinese-influenced style from an early age. Then, thanks to a long-standing family connection, he went into the service of Matsudaira Sadanobu, the daimyō of Shirakawa Province.

Sadanobu encouraged Tani's development as an artist. In 1793, while acting as regent for the Shogun, he took the young painter along on an inspection of coastal defences near Tokyo. The resulting landscapes, many with Mt Fuji in the background, were collected as the Kōyo Tanshō Zu - or "Exploring scenery away from public duty". 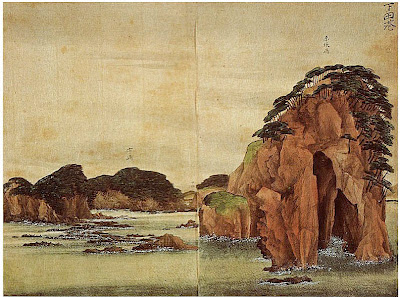 It may have been on this trip that Tani hit on the idea of painting famous mountains. Over the next decade, Tani made several long journeys, some lasting several months. Among other subjects, he depicted the islands of Matsushima, scenes in the Yamato region, and the Kōrakuen garden in Kanazawa. In the process, he became a successful and sought-after artist. Some critics carp that he took on too many commissions in his later career, leading to a decline in the quality of his art.

Be that as it may, it wasn't until the turn of the nineteenth century that Tani had seen enough mountains to make up a collection. His Meizan zufu (Chart of Famous Mountains), published in 1804, consisted of 90 paintings of 88 mountains (two peaks were painted twice over). The collection was reissued in 1812 as Nihon Meizan zufu. Tani depicted his mountains in a crisp and realistic style; the use of perspective may owe something to Western artistic influences then flowing into Japan by way of Nagasaki, a city that Tani had visited. 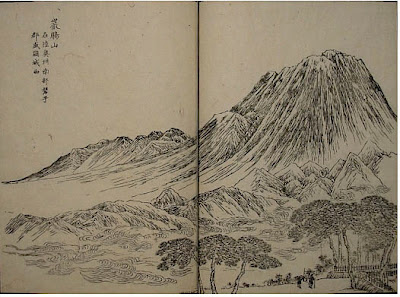 Thanks to his privileged status as a retainer to one of Japan's most powerful rulers, Tani was able to range even further afield than Tachibana Nankei. Accordingly, his list of Meizan includes five from the northern island of Ezo (later to be restyled as Hokkaidō) and five from Kyushu. Except for Shikoku, which Tani hadn't visited, the Nihon Meizan zufu was effectively the first all-Japan selection of notable mountains. 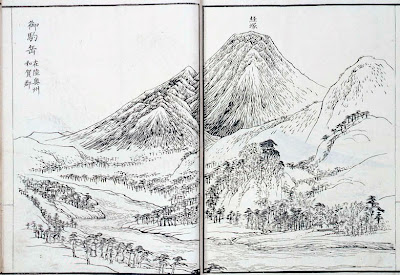 Height wasn't much of a concern for Tani. Fewer than thirty of his mountains rise higher than fifteen hundred metres. This is mainly because he set out to depict mountains that could be seen from the main roads of his era. Moreover, the high mountains of central Japan were more or less unknown in his day. As a result, rather few of Tani's selection coincide with Fukada Kyūya's One Hundred Mountains. 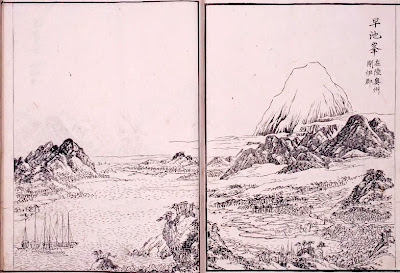 It may be, though, that the painter was closer in his thinking to the Hyakumeizan author than might at first appear from his choice of mountains. In many of Tani's illustrations, the mountain provides a setting for people going about their business in the foreground - travelling, farming, fishing. These mountains are not remote or sublime but part of Japan's daily life. In Tani's pictures, just as Fukada observes in his Hakusan chapter, "A mountain watches over the home village of most Japanese people ."

Why did Fukada choose to highlight Tachibana Nankei and Tani in his afterword when rather few references are made to them in the main text? Undoubtedly, they help to dignify the sport of selecting lists of mountains by aligning it with Japan's political establishment and cultural traditions - Tachibana representing the Imperial court and the travel diary genre, while Tani is associated with the Tokugawa authorities and a classical style of landscape art. 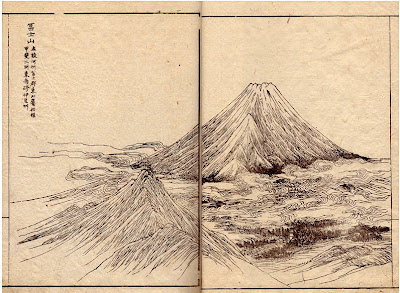 Was it a coincidence that Tani and Tachibana took an interest in mountain scenery at roughly the same time? Both men are representatives of what Herbert Plutschow calls an "Edo-period Enlightenment" - a late eighteenth-century efflorescence of individualism in literature, rationalism in philosophy, and renewed vigour in the sciences. In eighteenth-century Europe, scientific enquiry helped to motivate the first feats of alpinism - most notably the ascent of Mt Blanc by Horace-Bénédict de Saussure in 1787. 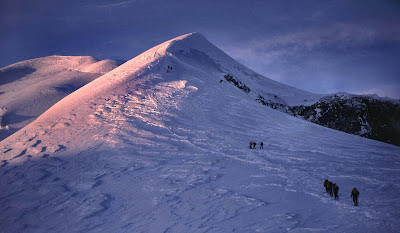 Unlike de Saussure (or Fukada Kyūya, for that matter), neither Tani nor Tachibana showed any inclination to set foot on the mountains they described. At most, their concern with "Meizan" showed that something was in the air. But the intensive exploration of Japan's mountains would have to await a far more thoroughgoing cultural revolution - that of the Meiji Restoration. And the impetus for that investigation would come from literature rather than science.

Images from Wikipedia and University of Tokyo, except for details (lowest), which are from this blog.

Thank you so much for this interesting post! I have had opportunities to see his nanga-paintings but didn't know about his Meizan zufu well. I've learned much from you. Reading the post, I like a lot the way you write with the juxtaposition of contrasting Nankei and Buncho. I once saw Buncho's lovely Kōyo Tanshō Zu at Tokyo National Museum. The color shades of green and blue were really beautiful.

PS I'm sure Buncho had a sense of humor.

an old raccoon(tanuki)in the shape of man??!