When Mt Bandai erupted on 15th July 1888, the blast devastated the surrounding country and nearby villages. Some five hundred people were killed or injured. Probably the worst possible place to be was a hot spring lodge perched on the edge of the active crater. Yet, by a miracle, one patron of this ill-fated establishment lived to tell the tale. This is his story:

Mr. Tsurumaki, a priest of Echigo, who was staying at the Naka-no-yu spa on the edge of the crater at the time of the eruption, and who escaped death almost miraculously, sent us soon afterwards the following and minute account of his terrifying experience: - "I started from my native village on the 8th of July, in company with four of my friends, for Bandai-san, and arrived there on the 12th, i.e. three days before the catastrophe. I had been there before, in July, 1885, when I stayed three weeks. 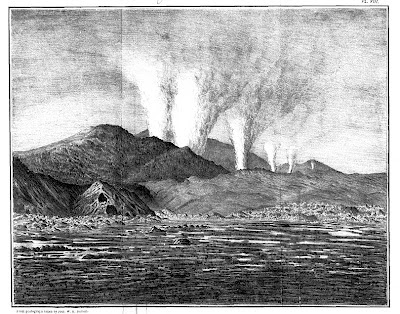 On the day of my recent arrival (the 8th) the fog was unusually dense, and the volume of steam at Kami-no-yu seemed to have lessened. On the 13th the fog was denser still, and remained so till evening. The 14th was a bright day, the fogs of the previous day having cleared up. From about 10 o'clock in the morning of this date the flow of the spring began to diminish. But the fact that the amount of discharge is smaller in fine weather and larger on cloudy days is well-known among bathers, so that we gave no heed to it. 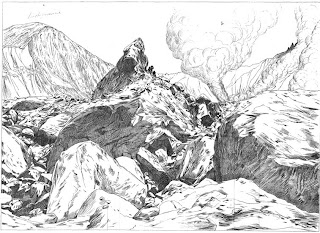 The morning of the 15th, which was the fatal day, dawned with a bright and pleasant sky, and the flow of the spring was as usual. At about 8 o'clock, however, there was a fierce convulsion of the ground, and we all rushed out of the house. In about 10 minutes (seconds?), while we were fearfully wondering what was the matter, a terrible explosion suddenly burst out from the slope of Kobandai, about one chō above a place at which steam has been issuing from time unknown. This was followed by a dense mass of black smoke, which ascended into the air and immediately covered the sky.

At this time, showers of large and small tones were falling all about us. To these horrors were added thundering sounds, and the tearing of mountains and forests presented a most unearthly sight, which I shall never forget while I live. We fled in all directions, but before we had gone many metres we were all thrown prostrate on the ground. It was pitchy dark; the earth was heaving beneath us; our mouths, noses, eyes and ears were all stuffed with mud and ashes. We could neither cry out nor move. I hardly knew whether I was dead or in a dream.

Presently a stone fell on my hand and I knew I was wounded. Imagining, however, that death was at hand, I prayed to Buddha. Later, I received wounds on my loin, right foot, and back. After the lapse of an hour the stones ceased to rain and the atmosphere had cleared from darkness to a light like moonlight. Thinking this a fine opportunity to escape, I got up and cried, 'Friends, follow me!'; but nobody was there. When I had descended about two chō, there was a second, and after another chō, a third explosion. In these sand and ashes were ejected, but no stones. I reached Ōdera at noon and there I received surgical treatment, etc."

Text and illustrations from S. Sekiya and Y. Kikuchi: The Eruption of Bandai-san - full report available on University of Tokyo website as originally published in Transactions of the Seismological Society of Japan. 13(2), 1890, pp. 139-222

More about Mt Bandai: a visit to the mountain in 2009
Posted by Project Hyakumeizan at 9:31 PM

What an amazing, jaw-dropping commentary! There's a movie here waiting to be filmed.

Wow, what a story! Thanks for sharing it with us.

Trying again from a PC.

When I visited the Bandaisan museum in the Ura Bandai area after having descended from the mountain, I watched a short film about a remarkable story. There was a man who had planned with some friends to spend a couple of nights at a spa on the mountainside. They all went up in high spirits but that evening, the man felt despondent for reasons he did not know. His friends first encouraged him to enjoy their time in the hot spring waters but his mood soured the evening. Some friends became angry that he was spoiling their trip that they had planned for a long time. It hadn't been easy for all of them to get time off together.

The following morning his mood was no better. He surmised that he was ill and thought it best to return to his home. Upon his leaving, however, the master of the spa noted that the animals of the forest were behaving strangely. Deer and birds were fleeing from the mountain and even snakes were seen slithering down slope. The man's friends thought this was a bad omen and they all agreed to cut their visit a day short.

I don't recall whether the man and his friends reached their homes or had almost made it home when the mountain exploded (a phreatic explosion like Mount Saint Helens) but he survived to tell his story. His sudden depression has been attributed to ultrasonic waves that emanated from deep below the mountain. Some people apparently can sense these waves and though they aren't aware of it directly, their moods become cheerless. In any case, this was one party pooper that saved his own life and that of his friends' too.

Peter: many thanks for that story - it's widely believed that animals can pick up the precursor signals of earthquakes (if such there are) but this is the first case I've heard where a person has had premonitions - indeed, life-saving ones. Eruptions might be easier to sense in advance than earthquakes too - apparently, they are sometimes preceded by high-frequency vibrations from the lava moving through the rock. Though my source is somewhat fictional, being Robert Harris's splendid novelistic recreation of the Pompeii eruption. Well worth a read...