Wolves in the snow

Should Japan bring back the wolf? We summon an expert witness from the past... 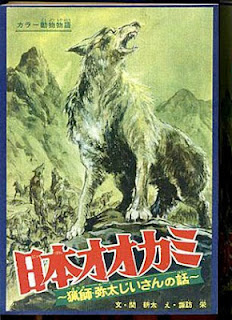 Remember you read it here first. Some months after this blog reviewed a book on the sad fate of the Japanese wolf, the Wall Street Journal has reported on efforts to reintroduce the animal – or rather, to import Tibetan wolves, as the native breed died out a century ago.

Bringing back the wolf would solve one of Japan’s most pressing ecological problems: its out-of-control deer population. Or so wolf fans hope. Environmental officials are less sanguine. Wolves, they fear, might cause more problems than they fix.

One Hundred Mountains is staying out of this debate. Except to suggest that, before anybody lets loose a container-load of Tibetan wolves, they might want to read the following extract from Suzuki Bokushi’s Snow Country Tales, an account of life in Japan’s backcountry two hundred years ago.

As explained in the first book of this work, the wild animals of Echigo migrate during the winter, wandering over the mountains to regions with less snow than ours. This they do because they can no longer find sufficient food; all is buried deep under the snow. In spring, however, the animals return to their native haunts. Still, even in spring not all the snow has thawed and disappeared, and food remains scarce. It can happen then that wolves approach human dwellings and carry off a dog or, on occasion, even attack men. This usually happens in small mountain settlements; wolves are afraid to approach villages of larger size.

In one of these mountain hamlets, there lived a certain poor farmer with his old mother, his wife, and two children. I will withhold their names because their story is so tragic. The daughter was thirteen and the boy seven. The man was both a very good father and a good son. One year toward the end of March, the farmer had business in a place five miles distant. The way he had to travel to get there was all narrow mountain paths. ''Be careful,'' warned his old mother. “When you go, be sure to take your rifle along." "You're absolutely right,'' he said, and he left with his rifle slung over his shoulder. He had an official license that permitted him to carry a gun, for he hunted as well as farmed for a living.

Soon the day was spent, his business completed, and he hurried home. On his way, just as he was approaching his village, he saw in the distance, in the shadow of the snowy mountain, a wolf. It seemed to be chewing on something. He crept within shooting distance, struck the fuse of his flintlock, and, right on target, felled the animal. When he walked over to where it had fallen, he found that the wolf had been gnawing on a human leg. Stunned, it flashed through his mind that the wolf might have sneaked into his own house, and fear befell him for his family. He left the dead wolf where it lay and raced home. 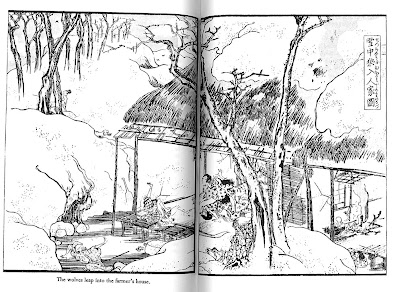 Outside his cottage the snow all around was dyed crimson with blood. Wildly alarmed, he leapt into the cottage just as two wolves bounded past him in escape. As he scanned the scene, he saw his mother lying by the open hearth, gnawed off on all sides, one of her legs totally gone. His wife, swimming in blood, lay near the window. She, too, was mauled and chewed. Threads of her cotton crepe weavings lay scattered and trampled everywhere. As for his seven-year-old son-he found, outside in the garden on the snow, only half of his little body. His wife was still breathing. At the sight of him, she tried to sit up but could not, for all the strength had left her. All she could do was gasp "Wolves!" Then she was gone. The good man, not sure whether it wasn't all a horrible nightmare, stood clutching his rifle.

Then he remembered his daughter and began to call her name, half in tears. At this the hapless girl came creeping from underneath the floor and, with an anguished cry, threw herself on her father's neck. The father clutched his daughter to him and wept. Since houses in these mountain settlements lie rather far apart, set here and there, no one else knew of the tragedy. During a single day the farmer had lost his mother, his wife, and his son, all torn to pieces by the fangs of wolves. The stricken man gnashed his teeth in torment, and father and daughter moaned ceaselessly and raised their voices in wails of agony.

By and by the other villagers heard about the awful happening. They came one after another, each screaming in horror when they saw what had happened. As more and more neighbors arrived, they asked the poor girl how it had happened. "Suddenly three wolves came leaping in through the window. I was tending the hearth, and at once crept under the floor of the house. I heard the screams of Mother and Grandma and my little brother, but I stayed where I was, chanting ''Save us merciful Buddha!''

The event was reported to the authorities. At evening the next day, the farmer laid his wife and little son in one coffin and carried it along with the one for his mother to the place where the villagers burned their dead. There was no one among the assembled villagers whose eyes remained dry. Because, on his mother's suggestion, the farmer had taken his gun along and so was able to kill the wolf which was feasting on her leg, one could think that he somehow avenged her. Yet it was a terrible shame indeed that the other two wolves escaped him. After this blow, the farmer abandoned his homestead and left with his daughter on a pilgrimage. Since all this happened very near here, it is a well-known story. 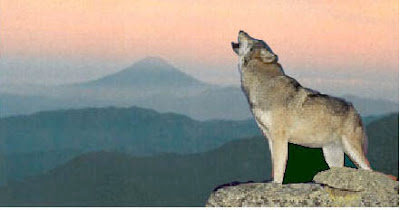 Wall Street Journal, 28 December 2012 edition: “If the Japanese Diet Included Deer, It Might Keep Wolves From the Door”.

Snow Country Tales: Life in the Other Japan by Suzuki Bokushi, translated by Jeffrey Hunter with Rose Lesser.

Related post: The wolf and the wild boar
Posted by Project Hyakumeizan at 8:54 AM

Bring wolves in from somewhere they are hunted, and continue a limited hunt on them. A bit of 'the fear of man'...