Tracking a forgotten typhoon: an essay in weather archaeology

After topping out from our climb in Takidani, there was time to relax on the aery balcony of the Kita-Hodaka hut. We were taking in the northwards view when, like a starship warping out of hyperspace, a lenticular cloud materialised at our feet. 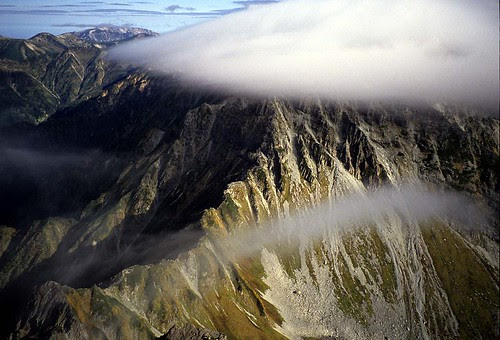 Waving, a photo by Alpine Light & Structure on Flickr.
The photo has attracted interest from a reader. “I found another interesting point in this Dai-kiretto [ridge] picture,” she writes. “It's the wind direction. I've thought west winds always blow in this area by the influence of the Sea of Japan. However, your picture shows the wind was blowing from southwest at this moment. You took this picture from south to north in the morning. The "streamline" cloud shows there were mountain waves which produce lenticular clouds on top of the flows. It also indicates that a strong wind was blowing from southwest on this particular morning. Strong humid winds from southwest... That means bad weather, in other words, low pressure or tropic cyclone was close to you!”

Not for the first time, I am blown away by the expertise that this blog’s readers bring to the table. Mitch-san is certainly right about the tropical cyclone sneaking up. Next day, Typhoon 19 rode into town, with results that you can read about in Crack babies. 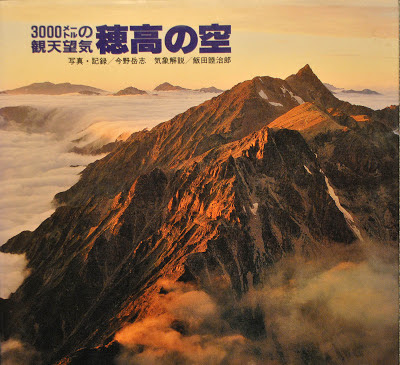 Mitch’s spot-on weather analysis sent me to the bookshelf, where I dusted off my copy of Skies over Mt. Hotaka (穂高の空―3000メートルの観天望気). This is a visual record of the weather around the Kita-Hodaka hut over two summer seasons in the early 1980s. The pictures are by Konno Takeshi, a nature photographer who worked as a member of the hut crew, and they are accompanied by explanatory write-ups from Iida Mutsujiro, a meteorologist and author of a slew of books about mountain weather. 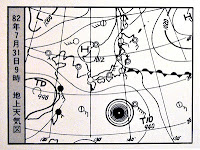 I wondered if the book might describe a weather pattern similar to the one that produced the cloud in the photo. It turns out that it does. On pages 66–67, we see clouds streaming over the Dai-Kiretto a few days before a typhoon arrives. When the pictures were taken, the typhoon still lurked several hundred kilometres to the south. But its approach stirred a dormant front back to life, with the result that strong winds and rain assailed the Northern Japan Alps that very evening.

Our storm may have behaved in a similar way. It seems that the relevant year’s Typhoon 19 (aka “Abe”) didn’t hit the mountains full-on, but went rampaging out into the Japan Sea instead. On the Dai-Kiretto, though, conditions were full enough when I made my traverse over to Minami-dake next day – a bad idea, as it turned out. 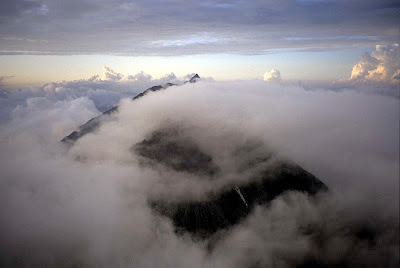 Lashed by rain squalls that came blasting upwards in sheets, I nearly came to grief after starting down a gully that led straight to a big drop. I realised my mistake in the nick of time. The moral of the tale might be this. When clouds that look like starships start to materialize, heed Mitch’s warning and seek safer ground. And if you do insist on crossing the Dai-Kiretto in a typhoon, contact lenses might give you better sight than sprayed-up spectacles. 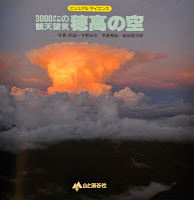 Skies over Mt. Hotaka (publisher’s English title, but there is no translation) is an original and imaginative book. It chronicles the more dramatic weather happenings around the Kita-Hodaka hut over two summer seasons and matches them up to synoptic weather charts and meteorological explanations by Iida Mutsujiro, a prolific writer of books about mountain weather. The photographer, Konno Takeshi, worked at the hut for more than a decade. The book is out of print, but you might find an old copy on Amazon Japan. Publisher was Yamakei.
Posted by Project Hyakumeizan at 7:18 PM

I'm amazed not only that you crossed the Dai-kiretto in a typhoon, but also by the books you have in your own collection.