Taking the measure of Mt Hino, a Meizan in miniature

“I have to work tomorrow, but you can climb Hino-san,” the Sensei had said as soon as I’d stepped off the plane. And now, next morning, we were at the drop zone and the van’s door was sliding open: “There you go – just two hours up, one down, so you won’t need much food,” she said, handing me a map and a packet of peanuts. “See you on the other side.” 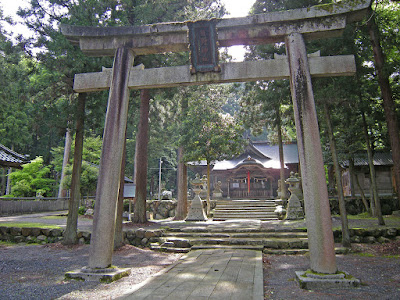 With that she was off, and I was left to confront Mt Hino. Rising all of 794 metres above the blue rooftiles and telephone wires of suburban Takefu, could this eminence really be a Meizan, a famous mountain of Japan, as advertised? From the carpark, there wasn’t much to see: just a wooded ridge, with no hint of the pyramidal profile that supposedly makes Hino the “Mt Fuji of Echizen”. 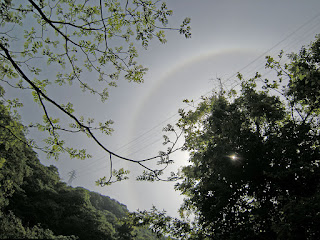 The path started diffidently, slipping between two houses into an unkempt pine grove. Then the forest gloom lifted to reveal a pair of stone lanterns and, beyond, the sunlight filtering through old trees onto a lightly steaming shingled roof. If such a Shrine from Central Casting stands at its foot, I began to realise, there must indeed be something to Mt Hino.

Curving across the head of a gully, the track angled towards the ridge. A glimpse of the sky showed a halo ringing the sun, always a bad sign in these parts. “Here in the North Country it is rarely possible to say whether it will be fine or cloudy on the morrow,” says the local meteorologist quoted by Bashō in his Narrow Road to the Deep North. Perhaps it was as well that the Sensei had pointed me up a small mountain. 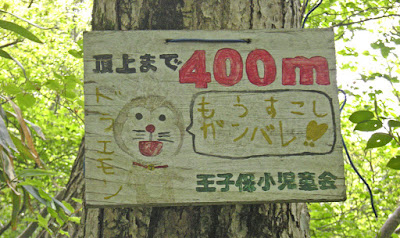 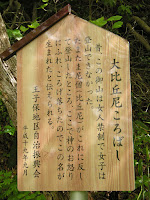 Somewhere below the ridgeline, I happened on the first of Hino’s way stations – like Mt Fuji or any other self-respecting sacred mountain, there are ten “gome” on the way to the top. Here, every station is marked by a placard hand-painted by the children of a local primary school. Irritatingly, each tells you how much further it is to the summit.

Soon after the "400 metres to go" mark was a signboard marking the spot where women in former days had to turn back - aligning Hino-san with more famous sacred mountains such as Omine in the Kansai region.

Near the top, the path gave way to bare rock. Further progress was enabled by slimy footholds, worn into the slope by generations of pilgrims or perhaps placard-painting schoolchildren. This is the kind of place it’s usually better to climb than descend. 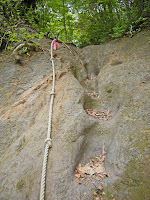 As it happened, Fukada Kyūya had to descend this mauvais pas, shod only in lightweight "Caravan" shoes. Had I arrived here about half a century earlier, I might have met him and Mrs Fukada coming the other way. The Hyakumeizan author records in an essay on two Fukui mountains, written in the mid-1960s, that he had been attending a middle-school reunion at Awara Onsen and decided to take in Hino-san the next day, possibly in a slightly hung-over state.

Fukada was traversing the mountain in the opposite direction from mine – because his wife Shigeko first wanted to pay homage to the memory of Nakatomi no Yakamori, a minor official who was exiled in about 740 AD to the hamlet of Ajimano, at the eastern foot of Hino-san. 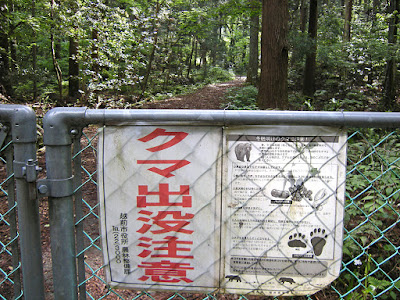 Nobody knows what Nakatomi did to deserve his banishment, but his name will live forever as the co-author of a series of sixty-odd poems, collected in Book XV of the Manyōshū, that he exchanged with his wife, a clerk in the Imperial Treasury, who was left stranded and bereft in the distant capital. 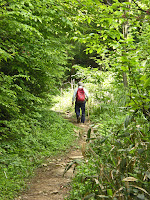 From a few of these finely turned tanka, it may be surmised that Nakatomi drew little comfort from gazing up at the rugged skylines of Echizen Province:

In blue-earth Nara
The great avenues run smooth
Fine to walk on
But these stony mountain trails
Make hard going for my stumbling feet. 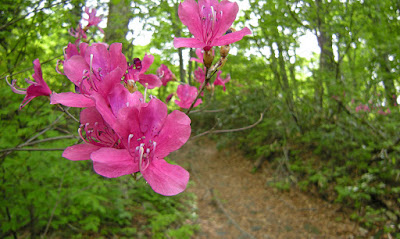 Now, apt quotations from the Manyōshū, some quite recondite, run like a motherlode through Japan’s most famous mountain book, all the way from the chapter on Adatara in Tōhoku (“If you leave your bow of Andatara spindlewood too long/You will never string and draw it with an easy swing …”) all the way to Ishizuchi-yama on Shikoku.

So perhaps it was Shigeko who mined this ore for the hard-pressed Hyakumeizan author, always scrambling to meet his monthly editorial deadlines. As Fukada’s essay records, at the time of their Mt Hino ascent, she was making a special study of Japan’s oldest collection of poetry. Was it on this very mountain excursion that she tipped her husband off about the the Manyōshū, and its treasury of mountain references? 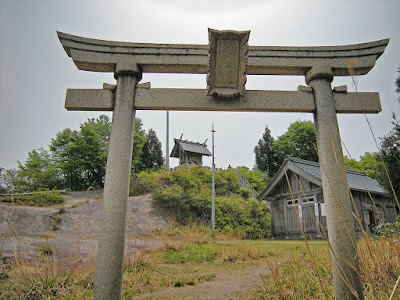 These musings were interrupted by the summit. The path led through a torii to an open grassy knoll surmounted by a shrine. Just below was a shelter for ceremonies: a signboard requested that visitors refrain from using it for profane purposes, such as partying or worse. 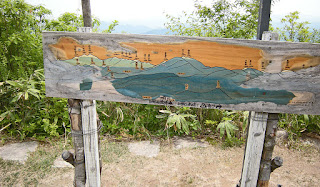 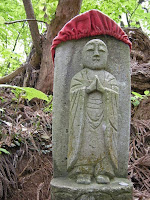 Several pensioners – this was a weekday – were already admiring the view out over the Fukui plain. One wandered over and took charge: “Now you should visit the real summit,” he said, leading the way through some bushes to the trig point. On the way back, we passed a new-looking monument of polished obsidian. “It commemorates the yamabushi,” explained my guide.

The monument piqued my interest – the yamabushi were the mountain mystics and pilgrims, adhering to a syncretic Buddhist and Shintō faith, who opened up many of Japan’s sacred mountains. Were there still yamabushi in Fukui, I wondered. My guide thought not. But, if not, who installed that handsome stele of obsidian, and why? 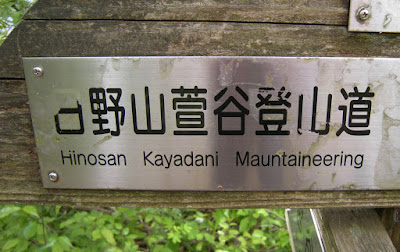 These were interesting questions but, alas, there was no time to pursue them. While we were talking, the gathering veil cloud had snuffed out the last glow of the sun. I bowed to my guide and hurried off down the eastern ridge. The steep and slippery mountain trail, to say nothing of its pendent spiders’ webs, was certainly harder going than a smooth avenue in blue-earth Nara. But it wouldn’t do to keep the Sensei waiting.

Posted by Project Hyakumeizan at 7:14 PM

Glad to see you were able to make it out on a short hike during your latest brief visit. Nice to read about some other mountains in Hokuriku as well, since it's still one area I'm not that familiar with.

Wes - thanks for reading. Actually, this hike took place last year ie in May 2014. But I was inspired to, belatedly, write it up by reading your many and varied accounts of the Kansai 100. It seemed that the charms of a few Hokuriku mountains should get an airing in English too ... watch this space.