In the cloud forests of Arashima-dake

“This is our revenge attack,” said the Sensei as we scrambled aboard the van. Her turn of phrase startled me, until I realized that she was talking about our failed winter attempt, a few years ago. As Arashima-dake is a mere 1,523 metres tall, this had been a signal defeat. 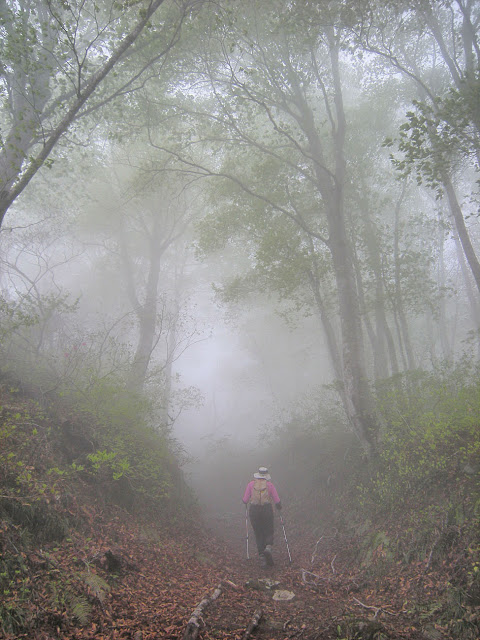 Now, in mid-May, we should be able to get our own back. Though, when we parked at the hamlet of Nakande, a sprinkle of farmhouses and kura on a hillside laddered with brimming rice paddies, it looked far from certain who would be exacting the advertised revenge.

A sodden blanket of cloud had expunged all the mountains of Echizen. We set off up a forestry trail that led into a realm of dripping pines. Already, I wished that I’d greased my boots more thoroughly. For her part, the Sensei didn’t remark the weather – after all, clouds and rain come bundled with her back-of-Japan territory. 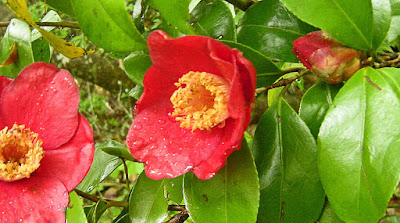 We’d decided on the longer route, a straggling ridge leading in from the west. This avoids the abandoned ski-ground that lies at the foot of the “normal route”, a field of broken dreams. And besides, the Sensei added, the long ridge has its own kind of charm as you follow it along, now rising now falling, through stands of beech that save the mountain views till last. 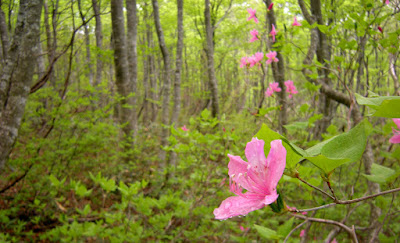 The mountain would certainly stay hidden today – I could hardly see the Sensei ahead, as she stepped between the first few beech trees. And, although it wasn’t actually raining, every breath of wind brought down a shiver of condensed mist droplets from the canopy. 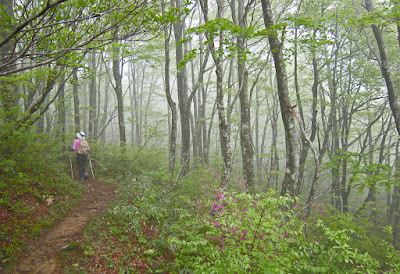 Adequate precipitation is part and parcel of life in these parts. In his book on the 150 notable mountains of Fukui – why stop at a hidebound one hundred? – Masunaga Michio reports a legend from Wakasa Province, in the southern part of what is now Fukui Prefecture. So much gold sand is washed down from Arashima-dake, a chronicle relates, that even the trout (ayu) in its streams have golden scales. 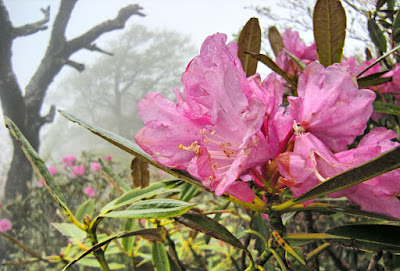 Arashima is a mountain of undoubted character (山格), says Masunaga-san, in a nod towards its status as one of the so-called One Hundred Mountains of Japan. This judgment is backed by his many years as the venerable president of Fukui’s oldest mountaineering club. And a good part of the mountain’s character can be ascribed to the wild extremes of weather that the ceaselessly eddying Siberian highs and lows haul in from the Sea of Japan. 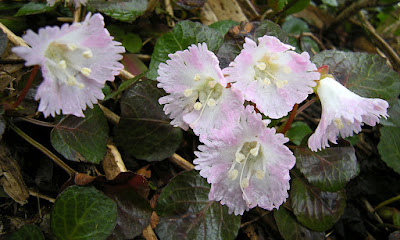 Masunaga-san has experienced Arashima-dake in all her aspects. His first climb was on a crystalline October day; under a sky as clear as a bell-note, he saw the Northern Alps strung out in the distance, like a string of snowy pearls. One winter, he made a solo ascent, through frosted beech groves swaying in the blizzard, to summit snows that merged into the racing clouds.

Early summer is a quiet season. Apart from the occasional sussuration of falling droplets, only a distant cuckoo broke the silence. The mist kept us focused on foreground details – last year’s sasa leaves carpeting the black mud of small swamps that lay across the path. Here and there in the drifting fog, a pink or white blur hinted at clusters of mountain rhododendrons in bloom – this time, Shakunage-daira, the junction of the two main ridge routes, would live up to its name.

The summit was socked in, making the recently installed panorama board on the summit particularly redundant – the view hardly reached as far as the shrine, just across the clearing. There was no reason to hang about; perhaps Arashima had won this revenge match after all.

We didn’t look back until we were half-way down the ridge, pausing for breath and an industrial-strength onigiri, on the small eminence known as Ko-Arashima. Only then, for the first time that day, did we see our mountain – the clouds had started to lift.

A snow gully seaming the summit flank reminded me of Nihon Hyakumeizan – in the relevant chapter, a relative of Fukada Kyūya tells him that, when just enough snow is left to make a Y in the gullies on this side of the mountain, that's how the fishermen used to know it was time to start catching ayu – those gilt-edged fish again – in the Kuzuryū River.

"But they wouldn't have talked about a Y-shape in the old days," queries the Hyakumeizan author.

"That's right. They called it a deer's antler," comes the reply.

Antler was the right word, says Fukada. And, in fact, a long snowpatch just like the prong of an antler was glittering there now, for us as it was for him. 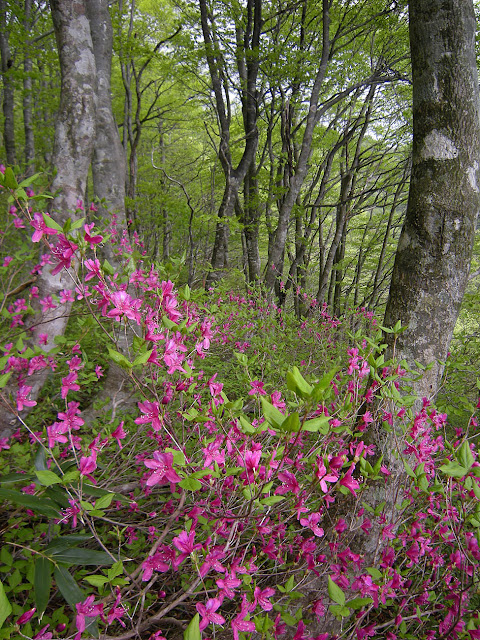 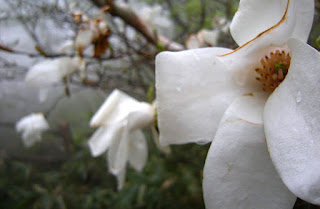 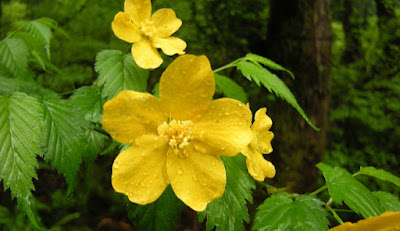 Posted by Project Hyakumeizan at 7:17 PM

I think your revenge hike was a resounding success, especially when rewarded with that million yen view from Ko-arashima.

Indeed, Arashima is one of those peak in which each season offers its own unique qualities. Perhaps I should consider a second visit. It seems only natural after two visits to nearby Ibuki

Wes: many thanks for reading - yes, a mountain with sufficient depth of character is different in every season - I'm afraid this is my third write-up of Arashima-dake, once each in winter, autumn and (now) early summer. But it seems that Fukada Kyuya also climbed in this season - he climbed the mountain in late May, 1961, together with his wife, Shigeko. And they also went over Ko-Arashima in at least one direction. So the ascent recorded here is very canonical...