Maitta, na. The poem wasn’t there – there was still a wooden post in the ground, but both plaque and poem were gone. Oh no, said the Sensei. I can’t say I was bothered, though. It was too splendid a day to worry about one tanka or haiku more or less. 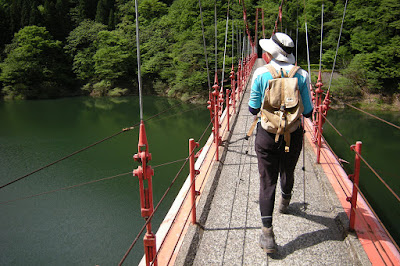 Sometimes I suspect that Hokuriku folk are playing the Seattle game – they talk up their fogs, mists, rains and snows to put off potential migrants from the overcrowded cities on the Pacific coast – who might otherwise surge over the mountains, in zombie-like hordes, and turn these rural provinces of Ura-Nihon into another concrete wasteland...

But, if that really is their game, they’ll need to keep quiet about days like this one. The morning shrugged off its last mists as the Sensei drove her van up the mountain road. A sturdy suspension bridge took us across a reservoir’s tea-green snowmelt and then in the strengthening day we’d rambled up through the beech woods.

On this May morning, the light roared vertically down onto our summit from a cloudless zenith. The glare picked out every leaf and shrub in hyper-real viridian. Westwards, the ultramarines of the Japan Sea merged into an azure sky. 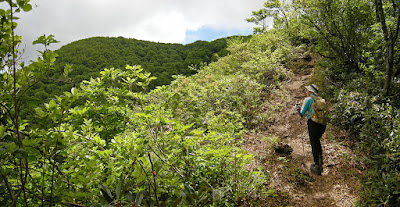 Was it a day like this when Fukada Kyūya, the future Hyakumeizan author, was captured by the mountains? “My hometown is Daishōji, in Ishikawa Prefecture,” he records in an essay on the mountains of Echizen, “but my mother was from Fukui, and that’s why I went to Fukui Middle School (today’s Fujishima High School). So the blood of both Kaga and Echizen courses through my veins. And, in my final year at primary school, the first mountain I ever climbed was Fujisha-ga-dake, which straddles the border between the two prefectures. Although it is only 942 metres high, the mountain that overlooks my hometown is elegantly formed.”


In the next paragraphs, Fukada explains what set him on the path towards his famous One Hundred Mountains:

People don’t just fall in love with mountains. They need some kind of impetus. In my case, somebody praised me for being a strong walker – if you want to get somebody to do something, the first thing to do is flatter them. In my hometown, there was a lad called Inasaka Kenzō, five years older than me, who was already studying medicine in Kanazawa at the time I started middle school. Ken-chan was a mountain-lover who was already doing climbs in the Northern Alps, and it was this great sempai who first taught me mountain ways. And a good guide is the second thing you need if you’re going to really get involved with something. 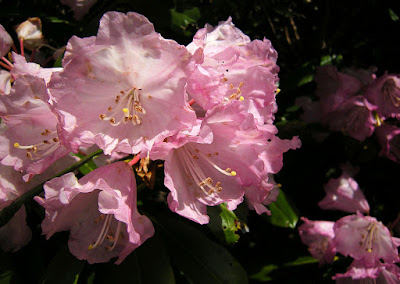 On this blindingly bright top, the first thing that involved me was to slap on more sun-cream. And the second was to sit down on a convenient log and sink my teeth into one of the Sensei’s industrial-strength onigiri – we’d had an early start. Around us, couples and families were spreading out picnic cloths and tucking into their Hello Kitty lunch boxes – Fujisha is still a good mountain for children. Primus stoves were roaring too, so that sybarites could sip hot soup or filtered coffee while gazing out into the blue distances.

I climbed many of our local mountains while I was in middle school. For seven and a half sen, you could buy a sheet of the Army General Staff’s 1:50,000 scale maps, and I liked to mark mine up with red pencil lines to show where I’d been. There were still no rucksacks and so I just slung my schoolbag over my shoulder and set off in straw sandals and leggings. By the time I went on to high school in Tokyo, I’d fallen completely in thrall to the mountains.

In high school, he fell for poetry too. Under the nom-de-fudé of Kyūzan (“Nine Mountains”), he churned out haikus and, with friends from his native Hokuriku, started a school literary journal. His enthusiasm for seventeen-syllable effusions faded after he moved on to Tokyo University – short stories and novels were more the thing now – but he kept composing the odd verse all through his life. It was one of these later poems that the Sensei wanted to show me. Somebody had recently put it up on this mountaintop, she said. 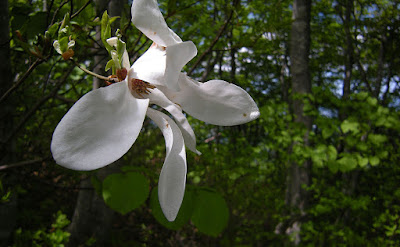 We walked over to a neighbouring clearing but found it empty, except for that telltale post. The poem had flown. Or somebody had taken it down. Probably Fukada would have preferred it this way – not a few of his Nihon Hyakumeizan chapters end with acerb comments on people who try to embellish mountaintops with statues, monuments and other tat: “You never saw such things in the old days and, speaking for myself, I prefer my summits unencumbered with them,” he wrote in the chapter on Senjō-dake.

In the end, we didn’t need a text – the Sensei discovered that she could remember the poem and, on the way down the mountain – note to potential visitors from Omote-Nihon: this path is horribly slippery even in fine weather – she recited it to me:- 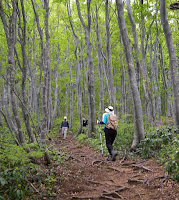 Still the evening peaks are burning
And though our climb is hardly done
My captive heart’s already yearning,
Aye desperately, to find our next one.

When the meaning of these words had trickled through, I looked at the Sensei with amazement. It was as if old Fukada had just read our minds. “So, where will you take us next?” I asked.
Posted by Project Hyakumeizan at 8:06 PM