Kyōgatake: a volcano that has taken the vow of silence

If you want to get to know a mountain, it’s best to visit in the company of its local guardians. So I leapt at the chance to inspect Kyōgatake with members of the Fukui Mountaineering Club, including its venerable president, Michio Masunaga. Appropriately, the summit we meant to climb is the highest that lies wholly within the borders of the club's home prefecture. 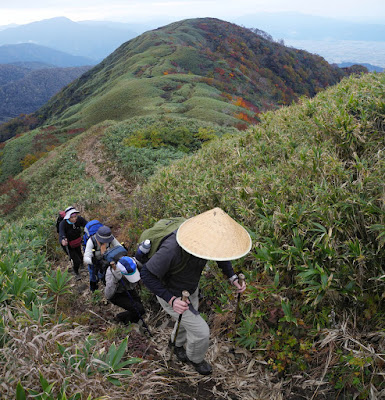 Skippping the first few hundred of Kyōgatake's 1,625 metres, we parked the cars half-way up Hozuki-one (“Moon-keeping ridge”). Clouds loured over the plain below, just as you'd expect from Hokuriku weather in October. A rainbow flickered out over nearby hills and rain started to spot. 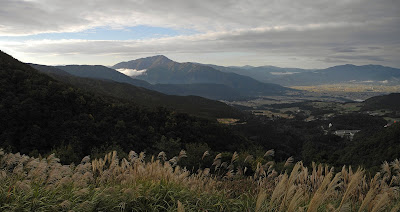 We set off past a sign warning us about the vipers. Although snakes aren’t the most likely source of toxin in this season: “Don’t touch that, or you’ll come out in a rash,” said the Sensei, pointing to a shrub with crimson leaves. It seems that urushi, the plant that provides the resin for lacquer ware, has much the same effect on human skin as poison ivy. I took a photo for future reference. 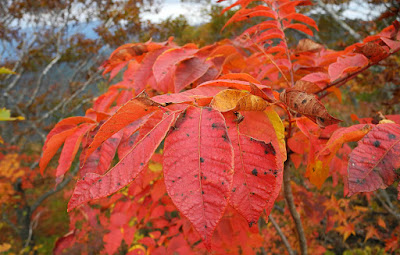 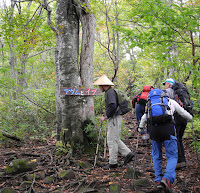 Only one, mind, as Masunaga-san was setting a brisk pace up front, belying his 82 years. Indeed, this being a Monday, almost everybody in the group was of pensionable age, except for the Sensei and myself. Yet we didn’t manage to catch up with the advanced guard until they stopped for a breather. We nibbled hill food under two intertwined trees that go by the name of “Adam and Eve”.

This nod in the direction of religious syncretism could mislead. As the Hyakumeizan author points out, the mountain names around here are firmly in the traditional camp. “In front of Hakusan,” Fukada Kyūya writes in his essay on Arashima-dake, “are arrayed the lesser peaks of Hō-onji, Kyō-ga-take, Aka-usagi-yama, and Gankyōji, the playground of the Fukui Mountaineering Club. The Buddhist names of many of these mountains are said to trace out the route that Monk Taichō took when he made the first ascent of Hakusan.” 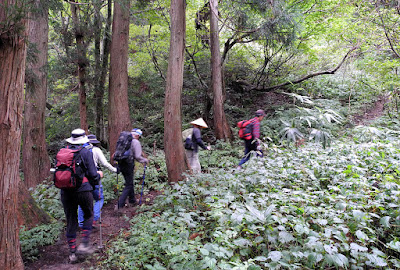 Kyōgatake means ‘Sutra Peak’, suggesting that a religious scroll might have been buried there. Lending credence to that theory, a sutra case was discovered near the summit in 1997, stamped with a seal that indicated that it had been brought here from Kai Province some time after the second year of Dai’ei (1522). A racier account of the name’s origin has the monks of Heisenji bringing their precious scrolls up here to burn when their monastery was sacked. 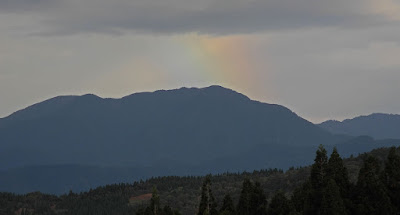 We recommenced our walk in a file no less disciplined than the far-famed “Kolonne” of the Swiss Alpine Club – the Sensei and I tried not to straggle this time. Just after we emerged from the trees on a grassy ridge, Masunaga-san stopped again. But this time it was for edification, not refreshment.

Here was the perfect place – our leader extended a ski-pole in a proprietorial manner – to observe where Kyōgatake’s ancient crater had collapsed, sending debris cascading down into the plain. That was in Jōmon times, about five to seven thousand years ago, about a million years after Kyōgatake's eruptive heyday.

I was impressed. Hearing that Kyōgatake had once been a volcano was like discovering that some placid senior citizen, a pillar of the local community, was notorious in his youth for a blazing temper and riotous excess.

Actually, you could extend that remark to the whole landscape we were looking at – yonder was Arashima-dake, apparently a model of orographic sobriety. But if you’d been standing here 20 million years ago, say the savants, you would have seen eruption after eruption. Later, the volcanic edifice crumbled away, but the day was saved for future Hyakumeizan enthusiasts when a bleb of igneous rock welled up to form today’s peaceable summit. So today you start climbing the mountain on volcanic debris and end up on top of a granitic dome.

A little later, plumes of steam and smoke would have billowed from a seawards direction as red-hot lava surged out into shallow coastal waters. Then these effusions hardened and crystallised into elegant hexagonal pillars of basalt. Today, you can watch crack-climbing fans clambering up them at Tojinbō, Echizen’s answer to the Giant’s Causeway. 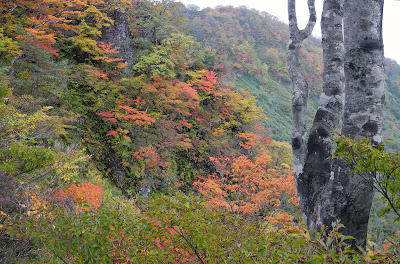 Masunaga-san had timed his briefing well. A little further on, we clambered up a wooden ladder past a wall of gritty grey and unmistakably volcanic rock – like frozen porridge – showing through the russet and yellow foliage.

Another steep slope led up to an intermediate top known as Shakushi-dake, which may have been the original name for the whole mountain. From here we could look down into the hollow left by the crater collapse – so much like a Lost World under these overcast skies that all it needed to complete the scene was a brace of pterandons flapping their way up out of the mist-raking treetops on leathery wings. 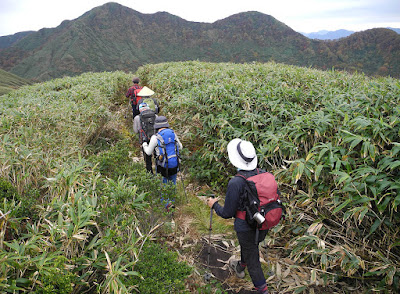 On the far side of Shakushi is another col. It was here that “a long time ago” Masunaga-san had bivvied in a snowhole during a winter climb of Kyōgatake. They’d started from the ski-ground at Rokuroshi and took the whole day to get this far, using a rope to traverse the narrow parts of the ridge.

Reading this account in Masunaga-san's book on 150 mountains of Fukui, I was reminded that these mountains have a bipolar character, balancing a benign face during the warm seasons with arctic asperity in mid-winter.

As he and his companions climbed the mid-winter mountain, he only sound was the crunch of their traditional snowshoes (kanjiki) biting into the drifts. The snow-laden trees merged into the mists, blurring the world into a milky whiteness: “It felt as if, little by little, we were being absorbed into the landscape.” 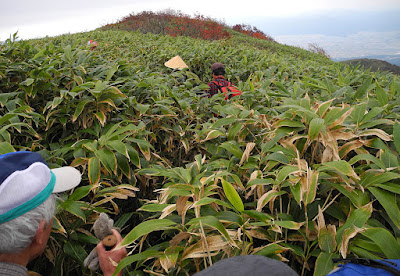 Another steep slope took us to the true summit. Once again, the Sensei and I found ourselves scrambling to keep up as, gripping handfuls of sasa or a grimy rope, we A-zeroed ourselves up the muddy runnel of a path.

Inland, the clouds had completely blotted out the most eminent Meizan of the whole Hokuriku region. Yet we didn't miss the view much. Geologically speaking, Hakusan is a mere upstart when compared with the ancient heritage of our own peak. Sometimes, maturity has its charms too.
Posted by Project Hyakumeizan at 4:29 PM

What beautiful prose and inspirational pictures! I hope to join you someday on a hike!!! I went skiing on a volcano in Argentina and hiking on an active volano in Hawaii, but I have yet to go to a volcano in Japan! :) from Amber

Thank you for your kind words, Amber, and I certainly hope we'll be able to meet up for an Echizen mountain hike one of these days. As for volcanoes in Japan, surely you have climbed at least one - Hakusan, as I saw from your estimable blog. Although the mountain has been quiet for a few centuries, the summit craters are still quite visible - that little lake in your summit photo was once a crater. But no immediate danger, probably - the last eruption was in August 1659, they say...