How Alpine summit symbols have stirred emotions for centuries

One January, I set off to ski-climb a mountain in central Switzerland. Billows of freezing fog rolled aside just below the summit, letting me zig-zag up the final slopes in the slanting rays of the late-afternoon sun. The last few metres were climbed on foot, to a summit cross still hoar-frosted from the mist’s crystalline breath. The sight was unremarkable. Summit crosses – in the Alps, they’re everywhere. And always have been, surely? 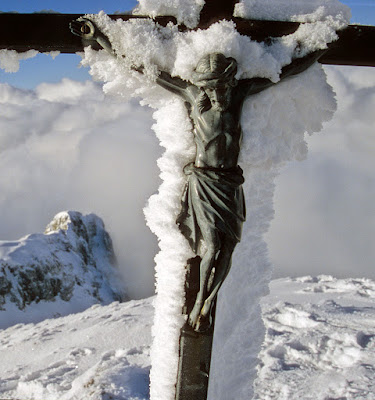 Or perhaps not. A decade after that excursion, some seem to be questioning if crosses should stand on summits at all. An unknown axeman has vandalised three of them in Bavaria, recalling an earlier incident in Switzerland. And, should one suppose that such amputations happen only in central Europe, these cases follow one on Ireland’s highest peak – although that cross was apparently felled with an angle-grinder, not an axe.

Now it seems to be Reinhold Messner who has an axe to grind. In an interview with the Süddeutsche Zeitung, in which he comments on the Bavarian incidents, he admits that summit crosses are not necessarily to his taste. They are “a relatively recent phenomenon”, he says, originating more as political than religious symbols. In his view, “one shouldn’t clutter the mountains with religious, political and other ideological symbols. These are mostly demonstrations of authority. They’re all about domination.”

When it comes to the facts, Messner is solidly grounded, as one would expect the founder/curator of six mountain museums to be. By coincidence, it is the Tyrol, Messner’s native region, that provides the only summit cross statistics that come easily to hand. These data suggest that 95.3% of all Tyrolean summit crosses were put up in the twentieth century (up to 1955). Of these, almost seven out of ten were dedicated in the decade after the second world war.

If the statistics support Messner, what about the symbolism? Here too, his case is well-buttressed by historical evidence. When, on 26 June 1492, Antoine de Ville forced his way, by means of “subtle engines” (including ladders), to the top of Mt Inaccessible in the French Vercors region, his hand-picked team of seven included two priests. These were employed to celebrate mass on the summit, baptise the mountain and inaugurate three small crosses.

Some commentators dispute whether the first ascent of Mt Inaccessible – or Mt Aiguille, as de Ville re-branded it – really belongs to the history of alpinism. Their beef is that de Ville didn’t set the ball rolling himself. Instead, he was ordered to make the climb by Charles VIII, whom he served in the role of royal siegemaster.

But, for the purpose of this disquisition, that is the point. Those summit crosses marked the successful conclusion of an official act – a demonstration of authority, to use Messner's phrase. De Ville even submitted an official expense claim, for “1533 librae, 8 solidi 5 denarii unum tercium”. Summit crosses never have come cheap; it’s the cost of getting them up there. Incidentally, there are no longer any crosses on Mt Aiguille today.


Indeed, few crosses adorned alpine summits during early modern times. Rather, they were sited to mark passes or boundaries, or they stood within sight of villages to protect them against storms. Such “weather crosses” were numerous enough to irk an Austrian scholar by the name of Thomas Ebendorfer (1388–1464). People who set them up, he said, should be rebuked for presuming to honour the Lord “inadmissibly”.

The admonition was quickly forgotten. In the Tyrol, mountain crosses proliferated during the first half of the seventeenth century, a time of stress. Although the region escaped the direct ravages of the Thirty Years War (1618-1648), it fell victim to associated ills such as the plague. Trapped in their alpine valleys, mountain dwellers sought to ward off these evils by setting up simple larchwood crucifixes, often with a protective rooflet over the cross-beam.

So far, nobody – with the possible exception of Antoine de Ville – had thought of planting a cross to mark a mountain’s first ascent. According to Martin Scharfe, a cultural historian, the first to take that step was Sigismund von Hohenwart (1745–1825), who with five companions reached the top of the Kleinglockner (3,770 metres), Austria’s third-highest summit, on 25 August 1799.


The arc of von Hohenwart’s career ran almost parallel to that of the Enlightenment itself. As a young geognost, he discovered on his alpine travels a mineral that occurs in eclogite, a rock from deep within the earth. Later, after his appointment as the Bishop of Linz, he helped to root out unorthodoxy. He was probably the author of the inscription carved on the stone base of the Kleinglockner cross: "Eia nunc rara moles, exple finum, crucem exalta, cultum promove!” (Well now here is an unusual monument (mass of rock), fulfil your purpose, raise high the Cross and advance Christian worship!) Raise the cross, promote the faith; the message could not be more explicit.

Returning to the mountain next summer, von Hohenwart made the aery traverse across to the Grossglockner (3,798 metres), which was destined to become modern Austria’s highest peak. There his party set up a much larger cross, almost four metres high. Two years later, it was damaged by lightning.

In retrospect, those turn-of-the century summers were a lull before the storm. Austria and its allies were then pausing for breath, having faced down the first onslaught of France’s revolutionary armies. Alas, the respite was short. Two days after von Hohenwart inaugurated the first modern summit cross on the Kleinglockner, a young French general relinquished his command in Egypt and set out for Paris, where he would soon wrest power from a moribund Directorate ...