The river is never the same (2)

Continued: an excursion along the Kurobe River's Upper Corridor

“Though the river's current never fails, the water passing, moment by moment, is never the same. Where the current pools, bubbles form on the surface, bursting and disappearing as others rise to replace them, none lasting long. In this world, people and their dwelling places are like that, always changing.”

In his classic Account of a Ten-Foot Square Hut, Kamo no Chōmei presents himself as the reclusive literary type. But his opening passage, quoted above, outs him as a prototypical Heian-era sawanaut, one who well understood the morphing, braiding, mining, sapping ways of a great river. 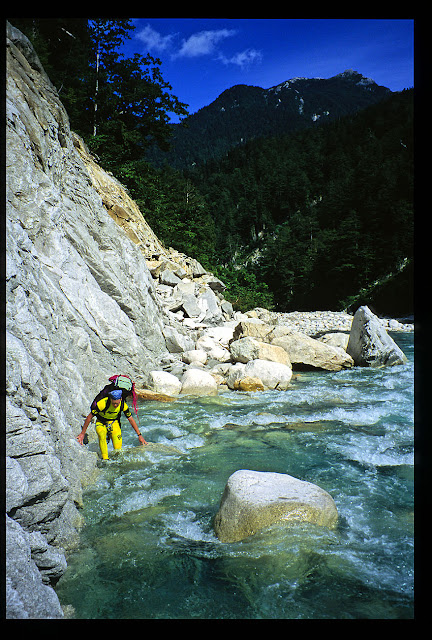 Had we read our Chōmei, we wouldn’t have been surprised to find ourselves forced into a roped river crossing where, only a few years before, Sawa Control and I had just kept walking along an easy embankment. And we would have spared ourselves the shock, right now, of finding a deep channel where none had previously existed.

This too was a crux pitch. The rock walls of the gorge were too steep to climb. Our buoyant packs floated us too lightly for us to use our feet to make headway; and we couldn’t swim against the current. Eventually we slipped through by flattening ourselves ninja-like against the rock. 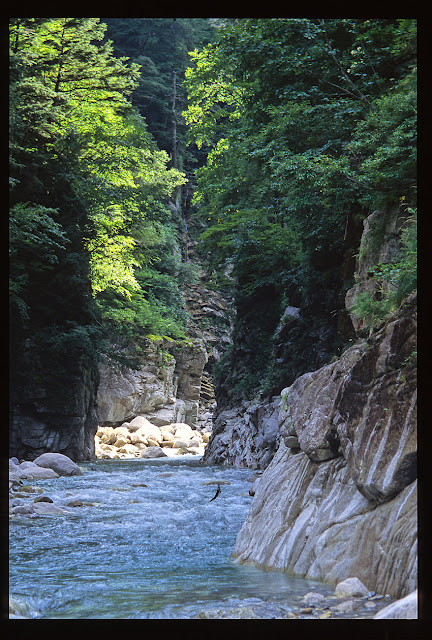 While we’d been tussling with the river, the sunlight had retreated to the mountaintops. Down in the gorge’s shadows, we urged ourselves forward. Campsites are far and few between in the Upper Corridor, and I was aiming for the one that we’d found on the previous visit, a broad tableland standing several metres above water level. Then, you could have pitched a small town of tents on it.

“I’m sure it was here,” I said, “right here in this bend.” And there, indeed, it was, when we looked more closely. But the tableland was gone; in its place stood a mere pedestal, washed down to a sliver of its former size. As Chōmei might have warned us, the river had shifted the scenery as dramatically as in any opera.

We scrambled up the bank and found a flat patch of sand for our bivvy shelter. Shivering in the evening gloom, we changed into dry clothes and scrabbled around for firewood. There wasn’t much to find on this portaledge-sized terrain.

We saw no trace of any prior occupants on our pedestal – in fact, we would see no trace of human existence until we climbed out of the river next day: no footprints, no pitons, no garbage, nothing to indicate that other people had ever passed that way. There weren’t even any contrails in the sky above. We were the sole inhabitants of this gorge.

It is difficult to conceive of a region uninhabited by man, says Thoreau in his account of a river climb up Mt Ktaadn, “We habitually presume his presence and influence everywhere. And yet we have not seen pure Nature, unless we have seen her thus vast and dread and inhuman, though in the midst of cities. Nature was here something savage and awful, though beautiful. … Here was no man's garden, but the unhandselled globe … Man was not to be associated with it. It was Matter, vast, terrific … the home, this, of Necessity and Fate …We walked over it with a certain awe, stopping, from time to time, to pick the blueberries which grew there, and had a smart and spicy taste …” 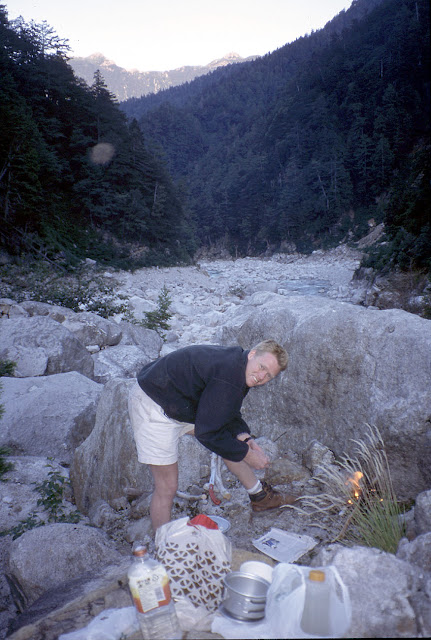 It was too dark now to go in search of berries. Nor did we expect any smart or spicy taste from the sachet of freeze-dried food that I’d just retrieved from the depths of my army pack and set to simmer on the Epigas stove. Not that we cared – after six hours in the river, our appetites, like those of Edward Gibbon’s Gallic army, were as indelicate as they were voracious. Caspar got a feeble campfire going just as the moon floated clear of the unhandselled ridge above us. Then we sat down on a river-rounded boulder to eat.

Posted by Project Hyakumeizan at 6:54 PM